It'll be different when you have one of your own

They said not to worry, as the kid's name is Kal-El, apparently. Although what that has to do with anything is beyond me.
1 Reply
3
Reply Wed 17 Sep, 2014 04:08 pm
@Lordyaswas,
That guy who has his back turned to the edge?

I would be against this because if someone is so stupid to try to put them in such danager where they could fall -- it just is nature's way of cleaning up the gene pool.

But a baby isn't in the position to make such a decision.
0 Replies
2
Reply Thu 18 Sep, 2014 06:35 am
@chai2,
I think the child would be in more danger sitting in a car driving down the highway than several feet from a drop protected by two adults watching attentively from a couple of feet away. According to Web MD, a child is injured on stairs every six minutes but people freak out about a well supervised child because the picture looks scary. I remember my children at that age and that child isn't going anywhere.
2 Replies
3
Reply Thu 18 Sep, 2014 06:52 am
@engineer,
Seriously?

You think the nut holder would be fast enough to get to the child if he/she took a mind to moving to the right, without putting himself that much closer to the edge, where the babies movement could slightly unbalance him?

I agree that fences should not have to be put up. Maybe this gene pool did need to be thinned.

According to Web MD, a child is injured on stairs every six minutes

That is exactly the point. It could be likely the child was within reach, you turn your back for a second and then the child is down the stairs. It isn't the child is not supervised, it is just surprising how quickly a baby or child moves. Almost every parent has had that circumstance where a child disappeared or harmed or almost harmed by a split second.

My toddler was right next to my husband and me in a store - I looked at an item and then looked down she was gone! You are talking about 2 seconds. My husband and I started to frantically look for her. No where abouts - where could she go so quickly - I thought she was snatached -- finally found her hiding under a display just feet from where we were.

The difference between getting hurt on the stairs and falling off a cliff is you fall off the cliff you die.

Anyone allowing their child to crawl near the edge of cliff even if you are nearby has never had that split second happen to them -- either that or they are dumb -- second that - even if it hasn't happened to them they are dumb - plain common sense.
0 Replies
2
Reply Thu 18 Sep, 2014 07:21 am
@chai2,
Yes, seriously. That child is not even crawling yet. He/she looks barely able to get up on hands and knees. Yes, give him several months and he'll be a terror, but not right now.

You know what is really dangerous? Leaving a child unsupervised with a 40-60 lb carnivore. Yet parents do this all the time with the family dog. Do I fault those parents? No, parents are supposed to make reasonable decisions about risk and reward. Still, there were eight children 2 and younger killed by dogs in 2013. If I post a picture of an infant posing with a dog, is there going to be a huge Internet outcry? I doubt it.

It is a pet peeve of mine that people's reactions are far out of proportion with real risk. In the US, there were more toddlers killed by handguns in the hands of other children in 2013 than people killed by terrorists (by about 4x). Is the outcry about handguns in the hands of children deafening? Nope. Is anyone willing to lower the speed limit from 70 back to 55 when the speed difference is a big factor in traffic fatalities? Don't hold your breath. Show a picture of a well supervised baby in a planned photo shoot and the Internet goes wild condemning the parents. Did anyone give the parents a lot of grief a few weeks ago when a 9 year old girl killed her instructor with an Uzi she lost control of? What kind of parents put a fully automatic piston in the hands of their nine year old? Oh wait, the deceased's family went on the Today Show and said it was all a tragic accident. There's a lot more there to complain about than this photo shoot.
1 Reply
2
Reply Thu 18 Sep, 2014 09:53 am
@engineer,
No one is saying there aren't other irresponsible parents and other crazy dangers out there - simply there is no real reason this child is allowed to crawl (and you see in the picture he is crawling and if it isn't then he is very large for a baby that cannot crawl yet) near a cliff -- other than to get a fantastic picture. Again simple common sense - same reason I would not allow my small 17 pound dog alone with a toddler (even though he has never shown aggressive) - why would you allow the potential when it is completely unnecessary?

Just because one irresponsible behavior is more common than another doesn't mean that either is stupid.
1 Reply
3
Reply Thu 18 Sep, 2014 10:05 am
When I was a kid, there was a not fenced off creek, full to the top, behind our home. We lived there almost a year and decided to move. There were no problems at all with the creek. But, as we were in the front getting the last things loaded on the trailer, a man came around the house, carrying my toddler sister. She had fallen in and, but for him looking out his window, she would have drowned. There is no substitute for a good fence where kids are concerned.
0 Replies
1
Reply Thu 18 Sep, 2014 02:44 pm
@Linkat,
Parents make safety vs convenience risk calls all the time. Putting your child in a car is risky. The risk is small, but there is more risk that staying at home. Owning a gun is a risk. Spraying herbicide or fertilizer on your lawn is a risk. Parents weigh these risks (or ignore them) all the time. I was accosted by a neighbor once because she saw me riding with my ten year old son in the front seat of my car. "Don't you know how dangerous that is?!" Yes, I do. I know exactly how dangerous which is why I wasn't particularly worried. Would he have been incrementally more safe in the back seat? Yes. Would I have been able to talk to him if he were back there? No. I made the decision to have him up with me sharing a conversation than in the back seat. I can do that as a parent. We weren't up on that mountain with those parents and their child. We can get all bent about it but whether or not that picture was worth the risk is their call.

I remember the uproar when Steve Irwin (crocodile guy from Australia) was holding his infant son while feeding crocodiles. He was flat out accused of child abuse for this. Would I make the same call? No. Am I one of the world's most experience crocodile handlers? No. Given that Irwin has passed away, his son might really value this picture. 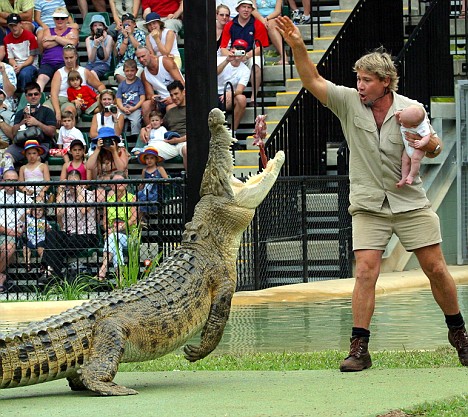 2 Replies
3
Reply Thu 18 Sep, 2014 03:44 pm
@engineer,
There is still a huge difference. Everything is a risk - eating food - you could choke, you have an allergic reaction, etc. But you need to eat to survive.

Being in a car - it is a necessity in today's every day life. But you take any reasonable actions to make the ride safe - for example putting a child in a safety seat in the back seat. It isn't difficult, but it does provide a level of safety. You also do not drive straight through red lights. You take reasonable safety precautions.

There really is no reason to have a child near the edge of cliff -- so why would you do it simply to get a nice picture? I also think it is dumb for Irwin to hold a baby while feeding a croc. Do I scream abuse over either -- no -- but it is dumb and lacks common sense. Just because something bad did not happen as a result does not mean that this is a good decision. It is just dumb.
1 Reply
1
Reply Thu 18 Sep, 2014 03:47 pm
@Linkat,
But it is the parents' call. They have all the information and understand the risk/reward situation. In Irwin's case, he released another picture showing he was much further away from the croc than the first picture made him appear. He knew a lot we didn't from that picture. The Internet mostly responds out of complete ignorance. Everyone is entitled to their opinions, but we don't have the facts, just one snapshot.
0 Replies
2
Reply Sat 20 Sep, 2014 01:08 am
@engineer,
Having your 10 year old kid belted in on the front passenger side seat is quite different that the situations featured in the two pictures. The risk on the cliff and with the croc are far, far greater, and the rewards far, far less (nice to have the picture? Really?)

The risk on the cliff and with the croc are far, far greater, and the rewards far, far less (nice to have the picture? Really?)

Two in one week!