How about a thread for restaurants you find interesting?

Forums: Restaurants, Food, Good Food, Restaurants Around World
Email this Topic • Print this Page
Reply Wed 27 Aug, 2014 10:44 am
I'll start. I just read about this one, which I've never been to, though I have liked many other San Francisco restaurants. 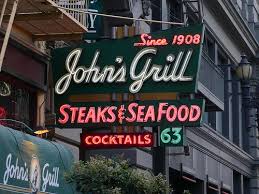 (Good slide show with the article)

Meantime, Diane and I wandered into downtown Albuquerque and saw a place we sort of recognized, with new name, frenchy. She pulled over - it was the place we'd been to before and liked back then.

We liked the place highly again.

My nominees are Kapok tree inn clearwater florida and some little restaurant we happened across while hiking the mountains near Garmisch Germany. Kapok Tree Inn was so out there..... huge, live green stuff and statues everywhere, seemingly millions of separate spaces many of which you could eat a meal in. The Garmisch restaurant got to me because there seemed to be nothing leading to it other than paths, and I did not know it was there before I found it. Did they resupply it by tunnel? I expect so.
0 Replies