Archduke Franz Ferdinand and his wife, Sophie, Duchess of Hohenberg, are gunned down in the Bosnian town of Sarajevo by Gavrilo Princep. The archduke, presumptive heir to the twin thrones of Austria-Hungary, was on an inspection tour of the army when, through a series of events that would have been comical if they had not led to such an enormous tragedy, he and his wife fell to the assassin's bullets.

There has been much speculation about what would have happened if Franz Ferdinand had survived. Some argue that he would have liberalized Austria-Hungary, making into a constitutional, federative state. In fact, Franz Ferdinand was interested in reforming the empire along "trialist" lines - i.e. he wanted to raise the northern (Czech, Slovak, Polish) and southern (Croatian, Slovene) Slavs to the same level as the Austrians and Hungarians. That was not, however, out of any love for the Slavs, but out of an intense dislike for the Hungarians. Franz Ferdinand, who spent much of his time in his home in Bohemia, evidently believed that the Germans and Slavs of the empire were natural allies and would unite to put the Hungarians "in their place."

The Habsburg heir's fear and distrust of the Hungarians may have been well-founded. The Austro-Hungarian military had three principle war plans at the turn of the twentieth century: Plan B, for a war with Serbia alone; Plan R, for a war with Serbia and Russia; and Plan U, for a war with Hungary. It may seem absurd that a nation's military spent time planning for war against a part of its own nation, but it was just one of the many absurdities of the empire that Robert Musil, in his Man Without Qualities, described so memorably as "Kakania."

Whether Franz Ferdinand would have ultimately reformed the empire or destroyed it we will never know. Any plans for a federative solution to the dual monarchy's problems died with him, and the only steps made at reform were attempted at the very end of the war, when it was already too late to save the crumbling Habsburg edifice.
Type: Discussion • Score: 21 • Views: 37,163 • Replies: 431
1
Reply Sat 28 Jun, 2014 08:31 am
The war didn't solve a damned thing. It just set the stage for the awful conflict of WWII. The breakup of the old empires that resulted was so botched that it also set the stage for the conflicts of the last century in the Middle East. Millions dead horribly for no good reason. A generation maimed and murdered directly, and four generations since maimed and murdered indirectly.
1 Reply
1
Reply Sat 28 Jun, 2014 08:55 am
marking
0 Replies
0
Reply Sat 28 Jun, 2014 09:13 am
Since still many "know" about this war from talks with the generation grandparents (or parents), "the memory of WWI remains national, hot and sensitive, even if it is second-hand". (Quoting Ute Frevert from the Center for the History of Emotions at the Max Planck Institute for Human Development)

This war ushered in the decline of European hegemony in the world, but it brought gains for other regions - from the rise of the United States over the entry of Australia into the international politics to the onset of decolonisation.
In Europe, the democratisation started, as well as welfare states ("social states") were created.
1 Reply
2
Reply Sat 28 Jun, 2014 09:24 am 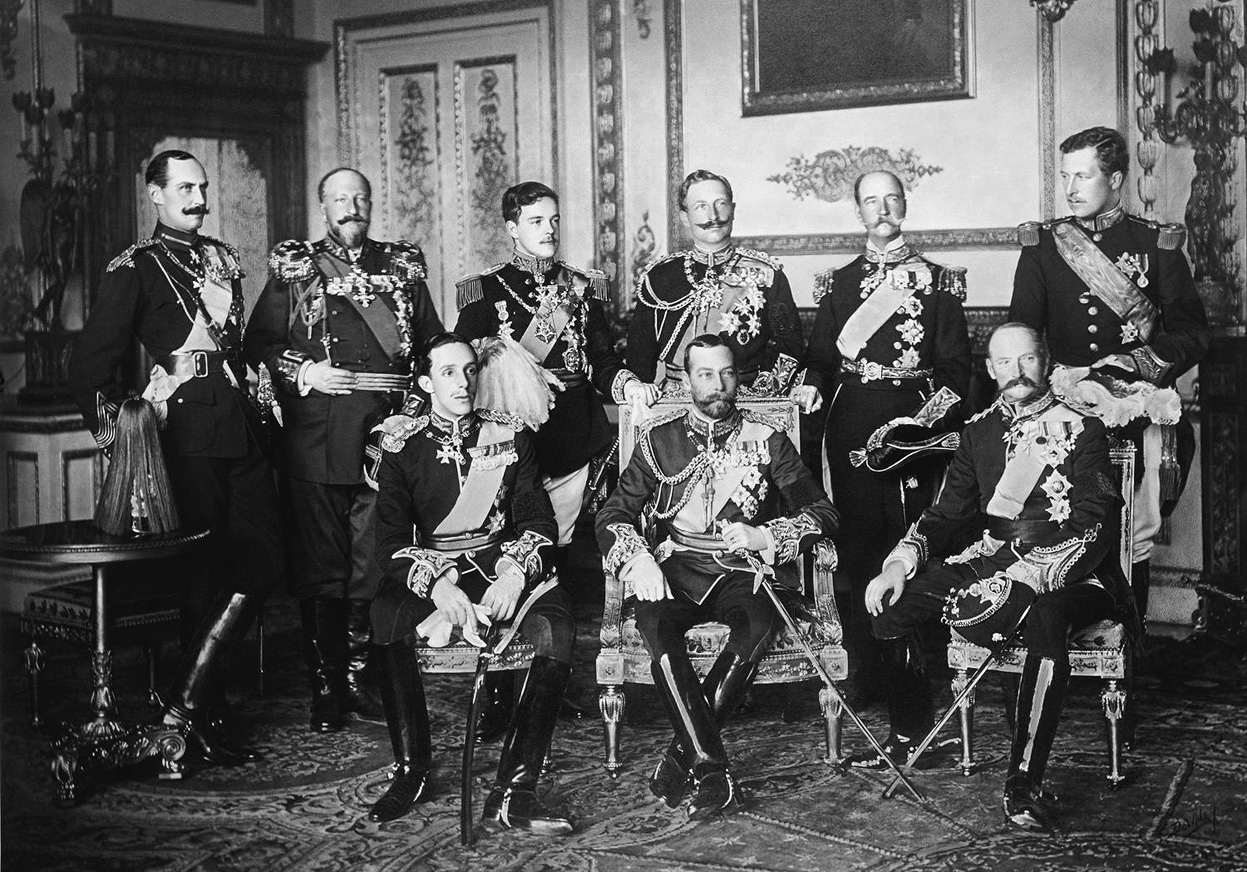 Nine European Sovereigns at Windsor for the funeral of King Edward VII in May of 1910, four years before the war began. Standing, from left to right: King Haakon VII of Norway, Tsar Ferdinand of Bulgaria, King Manuel II of Portugal, Kaiser Wilhelm II of the German Empire, King George I of Greece and King Albert I of Belgium. Seated, from left to right: King Alfonso XIII of Spain, King-Emperor George V of the United Kingdom and King Frederick VIII of Denmark. Within the next decade, Kaiser Wilhelm II and Tsar Ferdinand's empires would engage in bloody warfare with the nations led by King Albert I and King George V. The war was also a family affair, as Kaiser Wilhelm II was a first cousin to King George V, and an uncle to King Albert I. Of the remaining monarchs pictured, over the next decade one would be assassinated (Greece), three would keep their nations neutral (Norway, Spain, and Denmark), and two would be forced out of power by revolutions. (W. & D. Downey) #
1 Reply
2
Reply Sat 28 Jun, 2014 10:12 am
Two of the principals in the lead-up to the war: 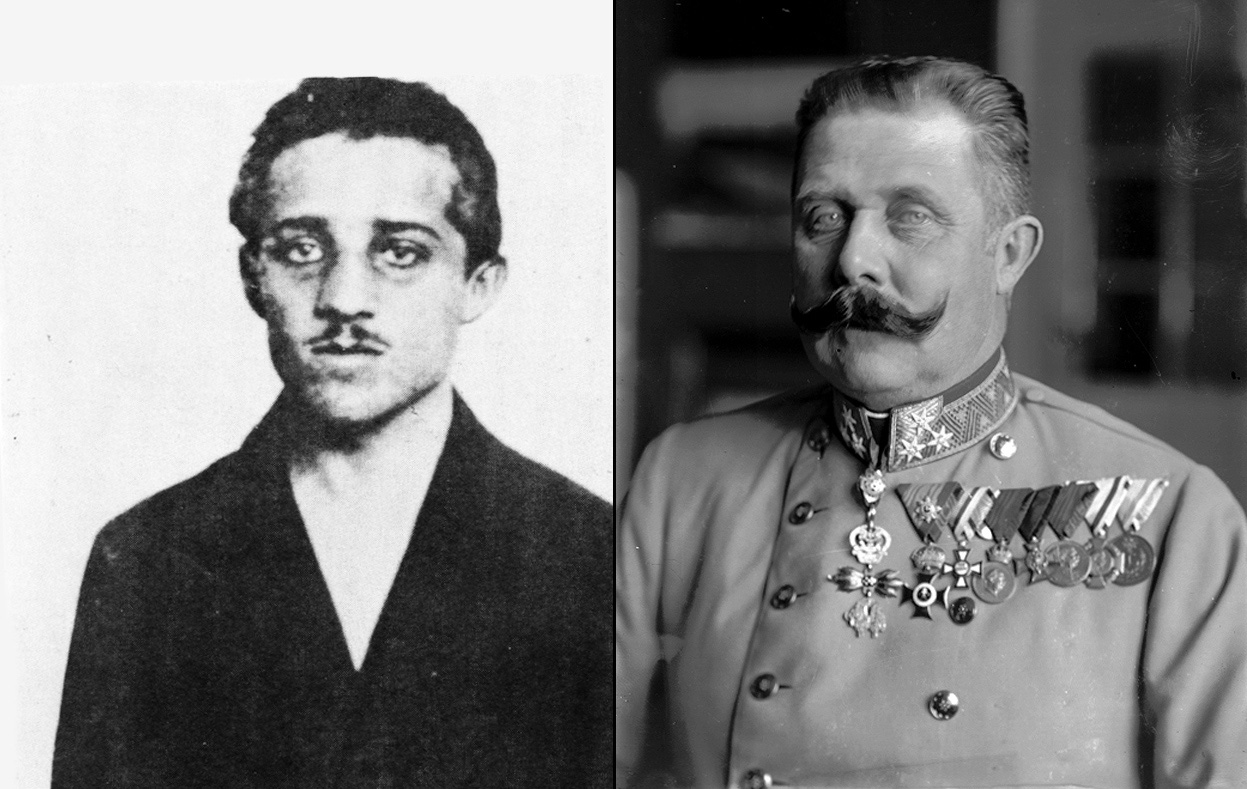 Assassin Gavrilo Princip (left) and his victim Archduke Franz Ferdinand, both photographed in 1914. Princip, a 19 year old a Bosnian Serb who killed the Archduke, was recruited along with five others by Danilo Ilic, a friend and fellow Bosnian Serb, who was a member of the Black Hand secret society. Their ultimate goal was the creation of a Serbian nation. The conspiracy, assisted by members of Serbia's military, was quickly uncovered, and the attack became a catalyst that would soon set massive armies marching against each other around the world. All of the assassins were captured and tried. Thirteen received medium-to-short prison sentences, including Princip (who was too young for the death penalty, and received the maximum, a 20 year sentence). Three of the conspirators were executed by hanging. Four years after the assassination, Gavrilo Princip died in prison, brought down by tuberculosis, which was worsened by harsh conditions brought on by the war he helped set in motion.
0 Replies
2
Reply Sat 28 Jun, 2014 10:20 am
If they'd outlawed bad mustaches in, say, 1910, maybe none of this would have happened.
0 Replies
1
Reply Sat 28 Jun, 2014 12:42 pm
@MontereyJack,
MontereyJack wrote:

The war didn't solve a damned thing. It just set the stage for the awful conflict of WWII. The breakup of the old empires that resulted was so botched that it also set the stage for the conflicts of the last century in the Middle East. Millions dead horribly for no good reason. A generation maimed and murdered directly, and four generations since maimed and murdered indirectly.


At last we agree on something.

It is also interesting to note that the opening Allied campaign in WWI was at Gallipoli - the beginning of the systematic destruction of the Ottoman Empire that occurred in tat war. Britain followed by inciting an Arab uprising with promises of national independence, only to use them to extend its empire and, through deceitful promises to both Zionists and Arabs, to sow the seeds of a century (or more) of conflict in the Middle East.

Revolution in Russia, aided by the Wilhelmite government of Germany destroyed the otherwise good projects of peaceful modernization of Russia and its further integration into the European economy.

The chief of the Austro-Hungarian general staff, Franz Conrad von Hötzendorf, meets in Vienna with the imperial foreign minister, Leopold Count von Berchtold. Archduke Franz Ferdinand's assassination had been immediately interpreted by the upper ranks of the dual monarchy's military and diplomatic establishment as an act instigated by the Serbian government, and Conrad, for one, was eager for revenge. "If you have a poisonous snake at your heel," he told Berchtold, "you step on its head, you don't wait for it to bite."

For Conrad, this was nothing new. Appointed chief of staff (in effect, commander-in-chief of the Austro-Hungarian army) in 1906, he had tirelessly advocated in favor of punitive war against practically all of the dual monarchy's enemies, including (and especially) Italy, which had been formally allied with Austria-Hungary in the Triple Alliance since 1882. In fact, as late as 22 June 1914, Conrad had reported to Berchtold that a decisive military action against Serbia was necessary, six days before Franz Ferdinand's assassination.

After the war, Conrad gained something of a reputation as a military genius who was let down by the inadequacies of the Austro-Hungarian military establishment. This interpretation was aided by the publication of his completely tendentious memoirs and of the official history of the war, written in large part by his friends and those who wanted to cover up the grotesque incompetence of the general staff. In fact, Conrad was, if anything, worse than most military leaders outside of Russia and Italy, even given that he was just as unprepared for modern warfare as the rest of them. It was, I suppose, to the Vienna government's credit that it gave very little weight to his constant calls for war, and Conrad ended up playing only a minor role in the July crisis.
0 Replies
1
Reply Sun 29 Jun, 2014 02:06 am
@georgeob1,
georgeob1 wrote:

0 Replies
1
Reply Sun 29 Jun, 2014 12:03 pm
And also, since we're talking Gallipoli, Eric Bogle's "The Band Played Waltzing Matilda", about Gallipoli and the aftermath for the thousands of Australians and New Zealanders killed or wounded in the battle.

Franz Ferdinand's great something's niece was on the radio the other day. She's still suing the (currently Czech) government for return of a castle and other real estate seized after the end of WW1.

There were a number of large noble estates confiscated by Czechoslovakia after the war. The Liechtenstein family -- yes, that Liechtenstein family, the one that owns its own nation -- had some huge estates in Bohemia that were expropriated. The prince also litigated with the Czech government after the fall of the Berlin Wall. I'm not sure how that turned out.
1 Reply
1
Reply Mon 30 Jun, 2014 09:01 am
@joefromchicago,
The Liechtensteins (only very few of the more than 100 family members live in Liechtenstein) owned 2% of Czechia = 10times the seize of the principality.
The Czechs don't give it back - they even haven't recognised Liechtenstein as a country.

Austro-Hungarian foreign minister Count Berchtold meets with the German ambassador, Heinrich von Tschirschky und Bögendorff, to gauge German support for punitive action against Serbia in response to the assassination of Franz Ferdinand. In speaking of Italy's dubious reliability in the event of a possible Austro-Serbian war, Berchtold describes the dual monarchy's rivalry with Serbia as a "struggle for survival" (Existenzkampf). Tschirschky gives his unofficial assurance that Germany would fully support a concrete plan of action from Vienna.

It appears that Berchtold had been apprised, shortly before his meeting with Tschirschky, of the preliminary results of the investigation into the assassination, including the confessions of the conspirators who had been apprehended. Even before the details of the assassination plot had been revealed, however, the upper echelons of the Austro-Hungarian government had been convinced that the plot was the work of the Serbian government.

Indeed, they weren't entirely wrong. The Black Hand, a shadowy organization of Serb nationalists, received material support from the Serbian secret police. Although it is not clear how much information about the organization's activities filtered up to the top levels of the government, it is unlikely that the Serb authorities were entirely unaware of, or unsympathetic to, the activities of such radical nationalist groups.
0 Replies
1
Reply Wed 2 Jul, 2014 09:36 am
BM