Most non Brits will be saying "who?".

Those of an idiotic disposition in the UK will miss the silly bugger.


The comedian and actor Rik Mayall seemed "happy and healthy" just moments before he died aged 56, a family friend said on Tuesday.

Peter Richardson, 62, who co-founded the Comic Strip, described how his son had been with Mayall just half an hour before the actor died on Monday, describing his friend as having "chatted away happily". He said that Mayall had "seemed so happy and so healthy".

Richardson spoke of his shock at his friend's sudden death, telling the BBC: "We still don't know quite what happened, but it was a seizure of some sort. It was very quick."

Referring to Mayall's near-fatal quad bike accident in 1998, which left him in a coma for five days, Richardson said: "Well, he had 16 years after the quad bike – at the time I don't think people thought he would survive that. But he lived for another 16 years. It was just shocking that he went."

The comedian's cause of death is still unexplained, but his Scots wife, Barbara, 62, said he had had "a strong heart", and added: "'I don't think it was a heart attack. Maybe he had a fit, maybe it was his heart. We just don't know."

The police confirmed they were not treating the death as suspicious.

Despite making a full recovery from the bike accident 16 years ago, Mayall was left with epilepsy for which he had to take daily medication. He said: "I have had a couple of seizures. And it's always when I forget to take the pills."

The wife and children of the celebrated comedian on Tuesday expressed their devastation at his sudden death and paid tribute to a wonderful father.

Mayall's youngest child, 18-year-old Bonnie, wrote on Facebook on Monday night: "My dad was loved not only by my family, but by many many others. We will never forget him and neither will the world. R.I.P to the man, the myth, the legend – my wonderful, generous, foul mouthed and hysterical father. My idol now and forever. We love you daddy."

A spokesman for the family added: "It is a terrible shock. All we know at this stage is that Rik died at home. We are all deeply saddened by this news, from the enormous number of fans Rik had, to those who worked with him and knew him as a man as well as a fine actor. He touched many lives, and always for the better."

Mayall's wife, who found him collapsed at their home, also posted family photos in memory of him on social media. The pair had been married since 1985 when they met while filming A Kick Up The Eighties in 1981.

Mayall, who is considered one of Britain's comedy greats, rose to fame on the BBC sitcom the Young Ones, and later in roles such as Lord Flashheart in Blackadder III, the Conservative MP Alan Beresford B'Stard in the 1985 sitcom The New Statesman, and Richie in Bottom. 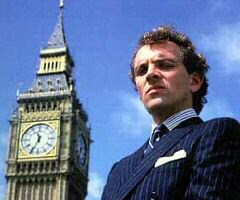 A fake English Heritage-style blue plaque has since been put on a bench in Hammersmith, west London, in tribute to the comedian, as the sitcom Bottom was filmed in the borough. It bears the single line: "Richard Mayall 1958-2014: Punched a friend in the balls near this spot."

Despite the trauma of his accident Mayall continued to act and had appeared in the drama series Jonathan Creek, and the recent Channel 4 sitcom Man Down.

He had also recently contributed to a black comedy sketch, which aired in last August and was entitled Don't Fear Death. The sketch referred to death as "your passport to complete and utter freedom – no pulse, no responsibilities. Carpe mortem – seize death".

A post-mortem examination will be carried out by the west London coroner in Hammersmith.
1 Reply
0
Reply Tue 10 Jun, 2014 04:52 pm
@Lordyaswas,
That made me tear, and until today I'd never heard of him.
0 Replies
1
Reply Tue 10 Jun, 2014 06:39 pm
@Lordyaswas,
I recall his Blackadder stuff, That entire troupe was good. Who was mostresponsible for putting it together?
0 Replies
0
Reply Wed 11 Jun, 2014 08:57 am
I saw Rik doing standup at the Mayflower Theatre. He was the funniest comedian I've ever seen. At one point I was in agony, just hoping he'd stop for a few seconds, but he never did.

He was doing a skit on my favourite character Kevin Turvey.

0 Replies
1
Reply Wed 11 Jun, 2014 10:08 am
I remember him from the Young Ones and a few episodes of Blackadder and also the unfortunate Drop Dead Fred which did have its moments.

The Blackadder episode with Dr. Samuel Johnson and Prince George is especially memorable. "This all is beginning to sound like dago talk to me!"
1 Reply
1
Reply Wed 11 Jun, 2014 11:01 am
I first got into his humour when "Bottom" was on TV.

The weekly sitcom was all about two sad losers who shared a flat.
In this snippet it's Christmas, so they invite two sad loser friends over for the festivities.

This clip is five minutes, but I guarantee that by the end you'll know why he was considered a funny guy over here.

The Blackadder episode with Dr. Samuel Johnson and Prince George is especially memorable. "This all is beginning to sound like dago talk to me!"

0 Replies
1
Reply Fri 13 Jun, 2014 10:32 am
I remember Rik Mayall in that role, and loved all of the crazy characters in the Black Adder episodes. I had the entire series on the old VHS tape, remarkably it seemed to disappear when my son was home visiting during his college days. So, I now have the set on DVD, and no, he can no longer borrow DVD's, books, CD's or anything else I ever hope to see again.

His character was brilliant, his inventive turn of a phrase would make me laugh until I cried. I just pulled out the DVD's but it didn't come with a entire list of the actors, only six names on the jacket.

It's so sad that such a talented invididual died so young. A very bright light was lost, my condolences to his countrymen.
0 Replies
1
Reply Sun 15 Jun, 2014 10:55 am
I'm spending the rest of the day watching Black Adder!
0 Replies