The famed camel spider or wind scorpion (Eremobates gladiolus) in the Middle East. It's bigger than a human hand and very aggressive.

1. It can run upwards of 25 mph (by soldiers that have tracked the speed with humvees since it runs in their shadows).

2. It's called a camel spider because it climbs onto the bellies of camels and eats the stomach - because the spider secretes anaesthetics to numb the flesh, the camels don't notice until their intestines fall out.

3. It makes a screaming/squealing noise when it runs, similar to a child screaming.

They run 10 mph, jump three feet, are a nocturnal spider, so only come out at night unless they are in shade. When they bite you, you are injected with Novocain so you go numb instantly. You don't even know you are bitten when you are sleeping, so you wake up with part of your leg or arm missing because it has been gnawing on it all night long. If you are walking around and you bump something that is casting a shadow over it, and the sun makes contact with it, you better run. It will instantly run for your shadow, and scream the whole time it is chasing you.

(Scary things!)
0 Replies
1
Reply Sun 2 May, 2004 10:28 am
I checked on Snopes and this story is labeled "undetermined". I think the details about the screams sounding like babies and the gnawing off chunks of body parts must be BS, but they sure are disgusting, aren't they? I wouldn't want to run into one.
0 Replies
1
Reply Sun 2 May, 2004 10:49 am
I just found this.

I wouldn't dignify this story by calling it an urban legend. It's pure crap thought up by an adolescent mind.

Hardly anything is known about the six species that are known from the south Okanagan - in fact, three of these species have been discovered only recently and have not yet received official, scientific names. Knowledge of invertebrate ranges and status is poor, and new, intensive surveys are needed to further clarify the status of many of these animals.

Despite their common name, Sun Scorpions are not scorpions and shun the sunlight, preferring to hunt at night. They are also called wind scorpions because they appear to run as fast as the wind. They are sometimes called sunspiders after their sunny desert habitat. There are almost 120 species in North America out of 800 to 900 worldwide. Most North American windscorpions belong the Eremobatid Wind Scorpion Family.

This family consists of medium-sized arachnids (15-45 mm long)[1/2—1 3/4 inch] are mostly brownish or yellowish and often hairy. They differ from the only other North American family, Ammotrechnidae, in having a straight front of the head and 1 or 2 claws on the first pair of legs, rather than a rounded or pointed head and no claws.

Wind Scorpions, including Sun Scorpions (Eremobates gladiolus) are easily recognized by the pair of large, pincerlike chelicerae on the head in front of the mouth and by the slight, waistlike constriction near the middle of the body. Unlike the broadly joined cephalothorax and abdomen of scorpions, windscorpions have 3 distinct body regions - a segmented cephalothoracic area with 2 eyes at the front margin, a 3-segmented thorax, and a 10-segmented abdomen.

The chelicerae are used independently of each other to chew food - one pair holds the prey, while the other cuts it. The long, slender pedipalps do not have pincers and are used to scoop up water and bring it to the mouth. The first pair of legs are longer than the others and function in conjunction with the pedipalps as feelers. The other 3 irs of legs are used for walking.

Additionally, specialists identify this order by minute, T-shaped organs on the hind pairs of legs.

North America
No information is available at this time.

Sun Scorpions live in sandy, dry areas, hiding under stones or in shallow burrows during the day.

Why is it endangered?

Rare invertebrates of the south Okanagan and Similkameen valleys such as this species are threatened not by direct exploitation, but by loss or degradation of their habitats. They are at risk because their ecosystems are at risk.

The grasslands of the southern interior of the province are a valuable agricultural resource, and their rich soils have been ploughed and irrigated to produce tree fruits, grapes, and vegetables. Pesticide use has probably had a great impact on native insects living in around agricultural areas. As well, heavy grazing has altered the plant composition of grasslands, changing the invertebrate communities.

The massive diversity of invertebrate species in British Columbia makes it very difficult for entomologists to do a literature or collection survey to determine which species are endangered or threatened. Specialized, detailed surveys will be required for almost every species that is suspected of being endangered. Despite a general ignorance about invertebrate distribution, information is known about a number of species that are confined to threatened habitats of very limited extent in the Thompson-Okanagan valleys.

Females lay about 50 eggs in subterranean burrows, then stand guard over the eggs and young for up to several weeks until the young molt for the first time.

They use their jaws to capture and crush their invertebrate prey. They prey on insects and small vertebrates, including
0 Replies
1
Reply Sun 2 May, 2004 12:49 pm
coluber2001 wrote:

I wouldn't dignify this story by calling it an urban legend. It's pure crap thought up by an adolescent mind.

Yeah, aj, that was established pretty early on.

I remember that picture (can't see it now), it was cool.

But I still never want to meet one: 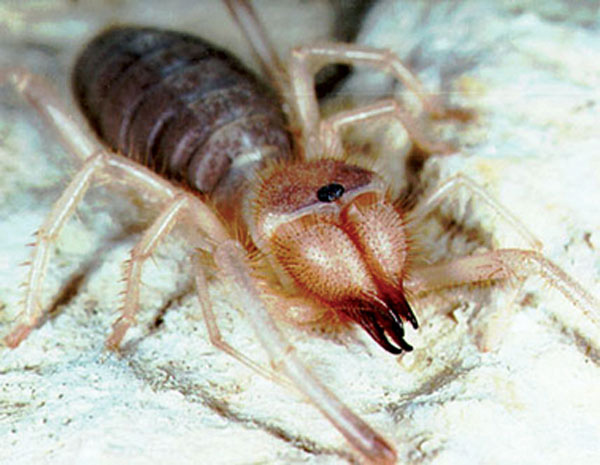 And a close up of their cute li'l faces:

I'm terrified of spiders and that's the scariest one I've seem yet. That's nightmare material!

<Cringe!!!>
0 Replies
1
Reply Mon 7 Jul, 2008 12:48 pm
youre wrong
actually most of the imformation is right that you say is a myth.
i have a family member in iraq who was recently on leave. He showed me the scar of a baby camel spider bite.
its basically a dark hole.
heres what he told me because he lives with these creatures everyday.
yes they are huge and they do grow up to the size of dinner plates. they do scream when they run. they follow the shadow of the trucks and try to keep up with them. they are nocturnal but will follow your shadow during the day. they run up to 10 miles an hour and have caught up with a truck that was going 25. they don't jump vertically but horizontaly 3 feet at a time. they don't jump on to the camels stomachs but crawl because they hunt at night while the camels are sleeping. they do inject you with a type of numbing venom that basicall kills the tissue around your bite.
to heal a wound of a camel spider bite medics have to dig out the dead tissue around your bite that swells up pretty big. (hence the dark whole in his members leg)

so don't post things unless you hear them from a direct source like i did.
and thats the truth