Bring Back the Key!

Lordy, Never thought of you as a salt miner, but you never know. The salt packet was definitely a fun thing that was improved out of existence. Phooey.

roger, There's absolutely no question that the prize in the Crackerjacks box was fun. But it wasn't improved away. It was just discarded, like a used tissue. Such is life.

edgar, Totally agree. The coffee can key is sorely missed. And the coffee aroma when the can was just opened is a great memory. Phooey.

When my mother made her chopped liver she used a large cast iron manual grinder with a metal removable handle. I think this was what it looked like:
http://www.biggamegrinders.com/product_detail_5792.aspx?gclid=CPjghdmovLsCFUho7Aod7lIAEA


Ragman, Your mother used a grinder for chopped liver?????

My grandmother had a grinder. She used it for making gefulte fish. I loved to turn the handle and watch the ground fish come out.

chai, Roller skates have definitely been improved. I miss the key and the noise they made on the sidewalk. I also liked that you could share a pair of skates with a friend. No sizes. No right or left. We would scoot around on one skated foot. I still have my skate key. You just never know.

I thought of two more.

Telephones with long curly cords. Who didn't love standing on a chair and dangling the phone in the air. Who didn't love watching it spin, faster and faster, as the tangles detanglified. Improved to cordless. Phooey.

Undeniable that computers are better than manual typewriters. And computers can provide lots of fun, but not when you're typing a letter, report, essay, etc. Where's the end-of-line bell? Where's the sound of the carriage return when a good typist throws the return? Gone! That's where.

Ragman, You don't remember the sound of chopping emanating from the kitchen? Is this a guy thing? Don't pay attention to how the food is prepared. Just eat it.

osso, Not exactly sure what you mean by "classic Roberta post." I'm gonna take it as a compliment. Thanks, kid.

Remembered something about using a manual typewriter.

My mother: Oh, let me type the damned thing for you.

Ragman, You don't remember the sound of chopping emanating from the kitchen? Is this a guy thing? Don't pay attention to how the food is prepared. Just eat it.

Oh, the shame. The ignominy. I am a major PITA. Almost professional. And I didn't know the abbreviation. I'm humilated.

Think of all the opportunities missed.
0 Replies
1
Reply Fri 20 Dec, 2013 07:59 am
@chai2,
edgar, Not sure why the water was in a great container, but I most assuredly like the idea of the dipper drinking.

chai, A thud and a plotz. Such an honor. Quoted in your signature line. I've hit the big time. As for opportunities missed, I ain't dead yet. I gotta make up for lost time. The question is do I make up for lost time by being a bigger PITA, or do I just use the abbreviation? Oh, hell. I can do both.
1 Reply
1
Reply Fri 20 Dec, 2013 08:04 am
@Roberta,
300 baud modems and bulletin boards. Popular bulletin boards would have all of their phone lines busy, and you'd just have to keep dialing and dialing....

And I miss the sound of the modems negotiating for 14.4 and 56K modems.


1 Reply
2
Reply Fri 20 Dec, 2013 08:05 am
@DrewDad,
IBM Selectric typewriters, and trying to make copies with carbon paper. Ah, the delight in peoples faces when they had to white out two different copies....
1 Reply
1
Reply Fri 20 Dec, 2013 08:07 am
@DrewDad,
45 RPM records and the little plastic inserts you had to use to get 'em to play. And they would inevitably snap out when you dropped the record onto the turntable. 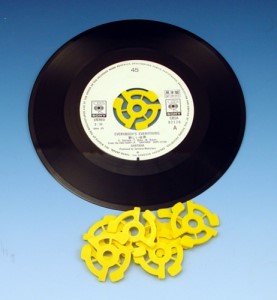