Since many German women, based on their hereditary genome, are more than a little zaftig (Yiddish for plump) , is there a high rate of breast cancer?


First of all ,I don't know anything about cancer of the breast in German women and I would never go to Wikipedia for that information.

Why are you commenting on the "German genome"? I don't recall any recently published info on the genome of German women as it relates to their zaftig ( if such exists).

As far as weight is concerned, it's been speculated that there is a relationship between being overweight and increased risk of breast cancer.

I also know very little about German women's diets. What are they eating that would cause them to be overweight, is indeed they are zafti?

The Miller/Foofie troll has a hard-on about Canadians. Miller has twice used "Canadian" as a term of disapprobation recently. They are the same person posting under two different accounts.


Or, two accounts by two people, with certain possible similarities due to having a common ancestor in the past two millenia, or maybe a little longer? Those Jewish genes really do make Jews similar, in my opinion. Something to think about as we approach All Saint Hallows Eve. A grand Celtic holiday.

All I want for Christmas is a Setanta sock puppet. Or, maybe an Izzy sock puppet? Imagine the arguments between an Irish and Brit sock puppet. Hours of fun.

Is it time for the "thimble" parade?

I am concerned about American women only.

Where does it say in the Able2know constitution that only US concerns are allowed?

The key word is "I." I have to be concerned about non-U.S. folks?

I would never go to Wikipedia for that information.


Wikipedia uses the data from the various national statistic offices (for Germany: Statistisches Bundesamt). Those data are sourced and linked. It's a lot easier than a) to go to some dozen websites of the various offices, b) look for and find the relevant link there.
1 Reply
1
Reply Tue 8 Oct, 2013 09:31 am
@Walter Hinteler,
Walter Hinteler wrote:

I would never go to Wikipedia for that information.


Wikipedia uses the data from the various national statistic offices (for Germany: Statistisches Bundesamt). Those data are sourced and linked. It's a lot easier than a) to go to some dozen websites of the various offices, b) look for and find the relevant link there.

i was referring to the use of Scientific Journals with peer reviews.


So you really think that data from "Scientific Journals with peer reviews" are better, different, more reliable than the official data from the national statistical offices? Interesting approach.
0 Replies
0
Reply Tue 8 Oct, 2013 11:39 am
@Walter Hinteler,
U.S. women are a mix of many ethnicities. German women are more of a homogeneous northern European gene pool; taller perhaps, and therefore a lesser bmi. You are comparing apples to oranges, in my opinion.
1 Reply
2
Reply Tue 8 Oct, 2013 11:44 am
@Foofie,
I am comparing nothing. I just looked the data.

Seems you are a geneticist who knows a lot more than people here about " German women are more of a homogeneous northern European gene pool".
2 Replies
2
Reply Tue 8 Oct, 2013 11:57 am
@Walter Hinteler,
Walter Hinteler wrote:

Seems you are a geneticist who knows a lot more than people here about " German women are more of a homogeneous northern European gene pool".


Walter, you are arguing with an idiot, a troll-provovateur (or provocatrice?).

I am comparing nothing. I just looked the data.

Seems you are a geneticist who knows a lot more than people here about " German women are more of a homogeneous northern European gene pool".


Not a geneticist; but, are you telling me that French women and German women are of the same gene pool? As many people believe, northern Europe has a population that is different than southern Europe. Height and body type are one of those differences. As I've read, 30% of German males have early male pattern balding. That is not typical in southern Europe. Naturally, over the centuries there has been much mixing, but statistically, German males have a disproportionate percent of early male pattern balding (by age 30 or so). Nyet?
1 Reply
2
Reply Tue 8 Oct, 2013 12:10 pm
@Foofie,
I've no idea. (But I would never suggest that I live in Northern Europe.)
1 Reply
0
Reply Tue 8 Oct, 2013 12:20 pm
@Walter Hinteler,
Walter Hinteler wrote:

I've no idea. (But I would never suggest that I live in Northern Europe.)

And, northern Europe is a possible euphemism for "nordic," and all the connotations of blond, tall, and Viking helmets (once upon a time).

It is possible that there are a few countries that are not northern in many Americans' minds, but not southern either. For example, Holland. But then again that was once just the sea?
1 Reply
2
Reply Tue 8 Oct, 2013 12:40 pm
@Foofie,
Foofie wrote:

Well, it seems that the notion of Germany being northern Europe but e.g. the Netherlands not has a lot to do with education: The Netherlands are a predominantly Protestant country, are situated further north than most parts of Germany ...

Northern Europe is the northern part or region of the European continent. A United Nations report published in 2011 defines Northern Europe as including the following ten countries and dependent regions: Denmark (with Faroe Islands), Estonia, Finland (with Åland), Iceland, Ireland, Latvia, Lithuania, Norway (Svalbard and Jan Mayen), Sweden, and the United Kingdom (with Guernsey, Isle of Man and Jersey).[1]

The UK and the Republic of Ireland are sometimes included in Western Europe;[2] as is Iceland for historical, cultural, linguistic and political reasons (compare Greenland which is part of the Kingdom of Denmark, but is geographically located in North America, and is sometimes considered to be in Northern Europe or the Nordic countries, though rarely Scandinavia proper).

Before the establishment of the Nordic Council in 1952, the term 'Nordic', or 'Northern', was commonly used to also refer to the Lutheran Baltic countries Estonia and Latvia, as well as the northern sections of European Russia. 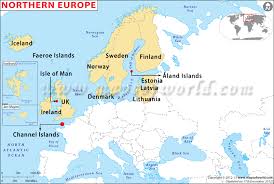 ...Germany is part of Northern Europe because many Americans think so.

I think you've got it. Yes. What Americans think is the definitive definition of what is.
0 Replies
0
Reply Tue 8 Oct, 2013 01:30 pm
Funny thing, getting back to why German woman might tend to be very fat, especially ( according to the article ) in their butts is because the Germans favor diets enriched in fatty foods.

Fatty foods and too much sitting around tend to increase the risk for heart disease and breast cancer in German women, besides increasing their clothes sizes.

The best diets tend to be those favored by Swedish women.

3 Replies
0
Reply Tue 8 Oct, 2013 01:33 pm
@Walter Hinteler,
I have never heard any Americans refer to Central Europe. I have heard of the Central Powers in WWI? Only western Europe and eastern Europe. In fact, as a child (1950's) Russians were referred to as Eurasians (perhaps due to the Cold War, and a possible hot war?).

If Europeans have different, and more nuanced definitions, I think that is cute; however, Americans being so far away just see the forest and not the individual trees, so to speak. Just east and west, or north and south. If there is a central Europe, shouldn't there be a Europe on the perimeter? Make it easy for Americans; in my opinion, many really think the world is comprised of New York, Los Angeles, Chicago, London, Berlin, Paris, and Beijing. The rest of the world is the hinterlands, perhaps in a different space-time zone?