the music is distinctively Canajun/North American

it is a great place to walk, look around, hold hands 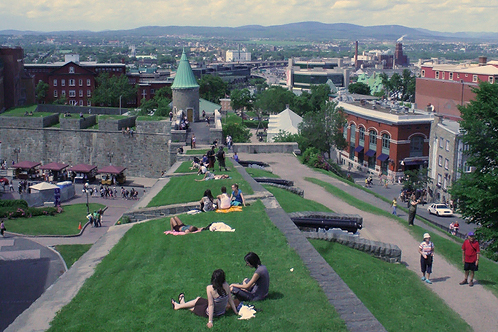 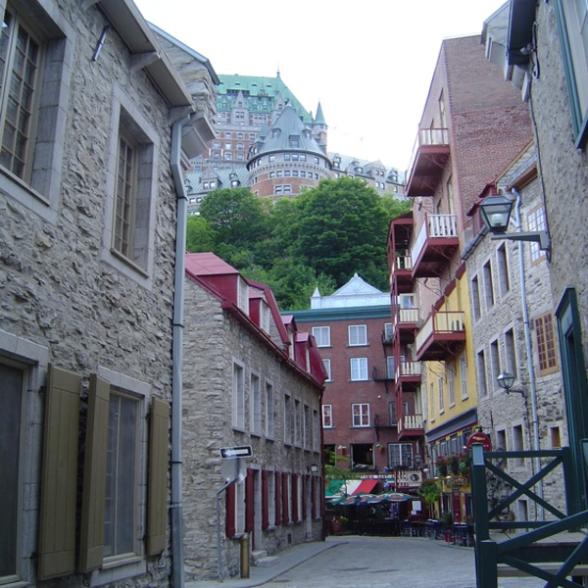 pack your prettiest scarves and be prepared to buy more

women in Quebec are gifted in the art of scarves
1 Reply
2
Reply Tue 16 Jul, 2013 08:14 pm
Montreal is one of my favorite cities, but I agree with the distinctive charm
of Quebec City. I'd go to Montreal first for 3 days and then on the Quebec.

In Montreal we usually stay at Springhill Suites in Old Montreal and have a
meal at Modavie. After seven, they have a jazz combo playing upstairs.

Every Saturday in the summer there are fireworks down by the river.
Don't miss the Jardin Botanique, especially the Chinese and the Japanese
gardens.

There's almost always some sort of festival going at at Place des Arts.

If you like to cycle, check the BIXI system of rental bikes.

1 Reply
1
Reply Tue 16 Jul, 2013 08:47 pm
@George,
Hi, George! We have six days, but the first and last are travel days. So actually, we'll have four full days there. Would you still advise trying to do both cities?
0 Replies
2
Reply Tue 16 Jul, 2013 09:13 pm
Eva, it's not a huge distance between the two cities. Both are beyond worthy of visiting. Quebec city is one of the oldest cities in N. America. The walled portion is what many of the great american cities once looked like. It's walkable, provided you wear good shoes, no heels. Seriously, the cobbles will kill them. Quebec is a three part city, newer, old, older. The oldest, basse ville, it's short doorways are testament to the age, were once the stompin' grounds of Samuel De Champlain. The food, the art, the people and the views are fantastic. English is spoken by most in the Vieux Quebec area. Outside the circle not as much.
Or take a trip out to the country. While in Quebec city, you're close to the Chute-Montmorency or Ile d'Orleans, both on the magnificent St. Lawrence, you'll find local wine, cheese, maple syrup and maybe blueberries too.
Montreal is hip, happening, young, vibrant city with great food. Very multicultural. English is not a problem. Great museums, shopping, tours on the river or up the mountain for a hike and for a city walk there are beautiful streets upon streets of great architecture.
Both cities seem to have endless music/comedy festivals as well.
I went to school there for a semester and fell in love with the place. The people aren't as ferocious as most are led to believe.
A little french goes a loooooooong way though. Regardless of what you choose to do, I don't think you can go wrong. I hope you love the area as much as I do.
1 Reply
1
Reply Wed 17 Jul, 2013 06:37 am
@Setanta,
Setanta wrote:

The city of Québec has preserved a good deal of the old city (the "upper town" as the English called it), so it might be pleasant in a touristy sort of way. Montréal, of course, has smoked meat--which makes it even more difficult to choose.


You have a Lambic beer in your fridge? I know its early but I'm thirsty right now.

Those two pics actually remind me of a place called Eger, in Hungary, where they make Bulls Blood.

Google up an image or two and see.

Must get to Quebec one day.

0 Replies
1
Reply Wed 17 Jul, 2013 07:25 am
@Lordyaswas,
Yeah, I have had Lambic before. I guess they're considered gourmet (not that I'm a gourmet by any stretch of imagination). It's served in small champagne glass. FWIW, it's a fermented raspberry beer and is called Framboise Lambic (Framboise is Fr. for Raspberry).

It became more popular outside of Belgium in this last decade or so. I had it 15 yrs ago and maybe once since. Curiosity got the better of me. They charge double the price for the privilege of sipping this slice of ambrosia. Meh!
1 Reply
1
Reply Wed 17 Jul, 2013 10:33 am
@Ragman,
Thank you for the warning, Rags. Lambic is not something I'm likely to order in the near (or distant) future. I like my beer or ale to taste like malt and hops, not raspberries or chocolate pudding.
0 Replies
3
Reply Wed 17 Jul, 2013 10:48 am
@Ceili,
Thanks to all of you for giving me the information I needed! (Tsar, Ragman, Set, Bethie, MAndrew, George, Ceili & others) I have made notes and will take them with me!

Based largely on the responses here, we've decided on Quebec City. We can always rent a car and drive down to Montreal for a day or so if we feel like it. My trip to NYC earlier this summer satisfied my longings for a Big City trip, so right now something more quaint and romantic sounds appealing.

I'll only have a few days of summer left once I return. I teach part-time during the school year, and in-service begins on Aug. 12. So this trip will be my summer's last hurrah.

We can always rent a car and drive down to Montreal for a day or so if we feel like it.

Oh sorry . . . some of the worst driving experiences of my life have been in the province of Québec. We drove up from Sherbrooke, crossed the island into Montréal, trying to get on Highway 20, which becomes Highway 401 in Ontario. This idiot was to my left, and he kept matching my speed--i had my left turn signal on. If i sped up, so did he; if i slowed down, so did he. I needed to get over because i was about to be trapped in an exit lane. Finally, i sped up, and just as he did so, i hit the brakes and pulled to the left and to hell with everyone around me. I was grumbling about the idiot drivers and the poorly marked highways, and The Girl said i should have seen it, it was well-marked. I was a little stressed at the time an i responded with: "NONE OF THE HIGHWAYS IN CANADA ARE WELL-MARKED, NONE OF THEM." We were pretty much silent until we got to a gas station near the Ontario border.
1 Reply
1
Reply Wed 17 Jul, 2013 12:21 pm
@Setanta,
That made me laugh! Why is it that way? Road signs can be perfectly obvious to one person while invisible to the person sitting next to them...

I don't mind having to learn how to drive in different places providing I'm there long enough to make it worth the hassle. But if I'm only going to be somewhere for a few days, I'd rather take cabs or let Hubby drive so I can concentrate on what we're seeing. He's driven well enough in New Orleans, Boston, and L.A. However, when I read in one travel guide that Montreal "directions" often mess up a GPS, that DID worry him a little!

Lordy -- Andouille is a spicy sausage common in Louisiana cooking. Love it. What is "Andouilette"? (Do I want to know?)
0 Replies
2
Reply Wed 17 Jul, 2013 08:32 pm
@Eva,
There's no point in renting a car to go to Montreal. There are buses, trains and I think (must google) there is a way to get there by way of the St. Lawrence.

I do recommend really really taking a good look at the land from the air. Quebec is laid out differently than the rest of North America and it is truly fascinating to see.
0 Replies