What do you call your mom's sister? (or your dad's)

Forums: Language, Community, Dialects, Pronunciations
Email this Topic • Print this Page
1
Reply Wed 17 Jul, 2013 02:21 am
@Setanta,
I believe you're quite right. My bad. I was typing from memory. Thanx.
0 Replies
1
Reply Wed 17 Jul, 2013 02:24 am
It is interesting that in southern Illinois and southeast Missouri, the local folks (born and raised there) pronounce St. Louis as "Sant" Louis--which is closer to the French pronunciation of the first word. Calling it Saint "Loo-ie" is closer to the French pronunciation of the second word. Ya win some, ya lose some.

Lots and lots of French place names in southeast Missouri.
1 Reply
3
Reply Wed 17 Jul, 2013 02:25 am
@Lustig Andrei,
I once spent a week or so, showing a trainee teacher around London in the mid 70's. She was from New York (nyu york) and was delightfully different.
At that time, New York was a bit dangerous and she thought London was the same, so for the first couple of days she was like a frightened rabbit and clung on for dear life.
She refused to even call my mini a car, and actually stood and laughed when I first pointed it out to her in the car park. She was amazed at the greenery in and around London, and couldn't get over the fact that there was a village green or a proper big park at the end of virtually every street.
She felt very naughty sitting outside a pub, drinking beer and actually hid it every time a policeman strolled or drove by.
She (we) were nineteen at the time, and drinking was still illegal for her in NY.
Carnaby Street blew her mind, as did Petticoat Lane. By day four she was doing the usual woman thing and disappearing off after some bargain, leaving me scratching my head as to how ladies manage to do it.
I'd hover in the area until she returned, and stroll on for a happy minute or so until I realised I was talking to myself again.
She got a liking for real ale, proper chips with salt and vinegar, my little car, pub life (loud, noisy, bawdy and mostly funny), tiny, old fashioned houses, total lack of skyscrapers, separate hot and cold taps, and the funny way we pronounced everything.
She could also knock spots off us at rounders, had aching feet, legs, you name it every day as she never walked back at home, nearly died after putting english mustard on her hot dog, almost crashed my car whilst trying to drive it round a big empty car park (she'd never seen a gear stick before) and had a certain sort of exoticness (is that a word?) that immediately drew people to her, as she was obviously different to the norm.
Happy days.

Have you tried marmite crisps? They're very good.

For those who don't know, Worcester is the county town for Worcestershire. I've heard Wooster and Woostershugh sauce used.

At that time, New York was a bit dangerous and she thought London was the same, so for the first couple of days she was like a frightened rabbit and clung on for dear life.

At one point I was living in S. Fla, and some friends had female relatives visiting. This was in the early 80's. All I knew before meeting them was that they were Irish.

I asked them where they were from and they said "Belfast"
"Oh my, that's a dangerous place" I said, and they looked at me strangely and laughed. A bit later I was leaving to spend the rest of the weekend at my boyfriends, and they asked me where he lived. When I told them Miami, they looked at aghast, and I laughed.
0 Replies
1
Reply Wed 17 Jul, 2013 06:31 am
@Lordyaswas,
Lordy, how would ye be after pronouncing Featherstonehough?
1 Reply
2
Reply Wed 17 Jul, 2013 06:48 am
@Debacle,
It's usually Fanshaw.

Here's a photo from the failway station at the village of Llanfairpwllgwyngyllgogerychwyrndrobwllllantysiliogogogoch in North Wales, on the island of Anglesey. 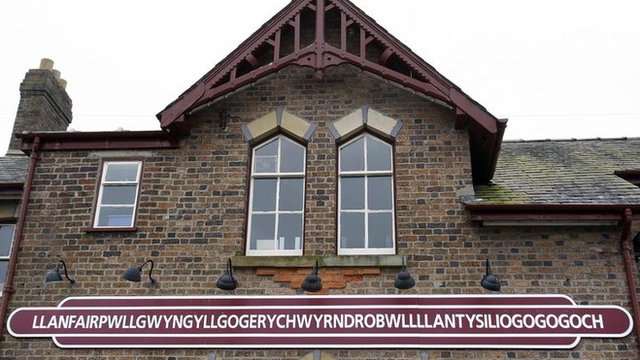 I had a friend who could rattle off the name as easily as I'd say 'encyclopedia.' But then she was born and raised in Llanrwst. English was her second language, but she spoke it impeccably; had to, she was the headmistress in an English grammar school. She was wont to recite Dylan Thomas in her native tongue. It didn't sound anything like:

The hand that signed the paper felled a city;
Five sovereign fingers taxed the breath,
Doubled the globe of dead and halved a country;
These five kings did a king to death.

The mighty hand leads to a sloping shoulder,
The finger joints are cramped with chalk;
A goose's quill has put an end to murder
That put an end to talk.

Much easier to learn Kryptonite.