What do you call your mom's sister? (or your dad's)

Forums: Language, Community, Dialects, Pronunciations
Email this Topic • Print this Page
2
Reply Tue 16 Jul, 2013 02:38 pm
@Lordyaswas,
If the "A" is pronounced like a very short "Ah", it's totally correct.
(His brother's name was Rudolf - so his firm was first called "Ruda" before it became "Puma")
2 Replies
2
Reply Tue 16 Jul, 2013 02:49 pm
@Lordyaswas,
Thanks for the explaino, as I can rarely see you tube videos.
(Buy me a new mac and I'll send you 50,000 fluorescent shoes in mismatched pairs, all with bad arch support, oh wait, that would possibly not be hyperbole, never mind.)

Once long ago, after a trip to San Francisco with I guy I was madly in love with but didn't work out, I had trouble after walking the city. In fact, I nearly couldn't walk the city after a few days.

Went to an orthopedist when I got home and found out the anatomy of my particular feet, re high arches, and their predisposition to go hurt when ball of foot hit pavement sans rolling. He recommended running shoes. That was long ago and the only running shoes around were Adidas, and those were only for men. I bought the smallest size.

My feet stopped hurting within a day or two. That would have been in '71.
0 Replies
2
Reply Tue 16 Jul, 2013 03:19 pm
@Walter Hinteler,
Walter, we seem to be the beneficiaries of German brothers who fall out. Apart from Adidas and Puma, there are the brothers Karl Albrecht and Theo Albrecht in Essen, who in 1960 had a falling out over whether to sell cigarettes at the checkout counter. As a result, we in America enjoy shopping at both ALDI and Trader Joe's. Both are excellent food stores. We do an ALDI shop at least once a week, buying milk at 99¢ a gallon and Grade A large eggs for 19¢ a dozen.

Here's a link to the brothers' histories.

quizzing izzie..
Now if I've got this straight, chips are what we call french fries, and a "butty" is a sandwich 'mongst the Brits, so you're suggesting a potato sandwich? french fires between two pieces of bread. eeewwww. I don't think it's going to be the world's next culinary sensation.
1 Reply
2
Reply Tue 16 Jul, 2013 04:49 pm
@MontereyJack,
That's it, MJ.

One thing about it, it beats 'aggis 'ands down.

A Super Deluxe: (except they'd probably use vinegar instead of the ketchup) 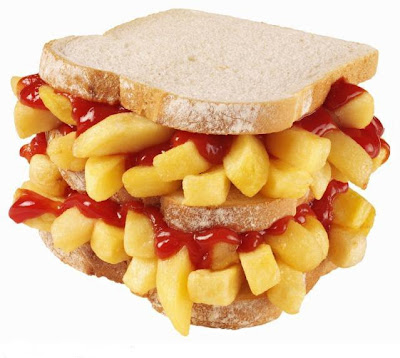 As for sandwich…we in New Jersey definitely say sangwich or sangwitch.


Nobody here in New Jersey (‘cepting me) ever pronounces the “p” in raspberry.

I know several people here who pronounce Wednesday like it is spelled.

Where in Jersey are you from, or are currently living?

I'm grew up across the river from Pt. Pleasant, in Brielle. We said sandwich or samwich like Boida, and said the "p" in raspberry.

We were very adamant about saying our "r"'s too. Absolutely no dropping of r's at the end of a word. My mother grew up in Newark, and father was from Bloomfield, and that's how they spoke.

We were hell on coffee, dog, Paul etc. though. Straight out of the Sopranos.

I didn't, and still don't say things like "runnin' around" It was always running around.

Funny Izzy, when you joked about me not getting my tounge around r's. I say my r's practically lie a pirate.....arrrrrrgh. Trying some of those Brit pronounciations, I imagine having something spherical in my mouth, and trying to say the R around it.
0 Replies
1
Reply Tue 16 Jul, 2013 08:48 pm
In Canada, we've kept a lot of the french pronunciation of words and names. I believe everyone up here says Vase = Vaz.
I've been stumped or confused people several times with what seems to me to be the natural pronunciation of french place names.
In Boston, I got a lot of funny looks and slumped shoulder when I asked questions about Faneuil Hall. Fanyooee...
Or when asking for information in a gas station about a border crossing in Calais, Maine. Kalay. They called it callous. What?
Minot - N. Dakota They said Mynot. I said Meeno
or Detroit - Deetrois.
I was using a Canadian map on one trip, looking for a Souris sooree river, and drove over the mouse...
I'm curious, so many of these names have been anglicized. Do you think that was a conscious decision or did the french just die out?

I'm curious, so many of these names have been anglicized. Do you think that was a conscious decision or did the french just die out?


It wasn't a conscious decision as far as I can tell. When English-speakers came to reside in places that had originally been given French names, most of the time they had no idea what the proper French pronunciation was. (The same thing happened in the Southwest where originally Spanish names get totally mangled by the local cowboys.)

There's a reverse twist, btw. I had always wondered why a city in northern New York State should be called Buffalo. To the best of my knowledge there were never any herds of bison grazing around Niagara Falls. So I researched it. It turns out that the original French settlers had referred to the place as beau fleau, slangy way of saying 'beautiful river' or 'beautiful stream' in reference to the Niagara River. The Yanks heard it but had no idea how to spell it or what it meant and adopted the name Buffalo as the closest they could come to saying it.
2 Replies
1
Reply Tue 16 Jul, 2013 09:32 pm
@Lustig Andrei,
That make sense in some places but in upper N.E USA there are still pockets of french and until recently it was spoken pretty regularly until the border was tightened. That's why I was surprised in Maine. N.Dakota sure, but Maine?
0 Replies
2
Reply Tue 16 Jul, 2013 09:49 pm
re Ceili (who would probably be Ceilidh if she used the traditional spelling):
Bostonians themselves aren't really self-confident about Faneuil Hall either. Most common is probably "FAN-yull" but I also hear "Fan'll" (the last syllable like ll in "I'll go now"). Incidentally Henry David Thuh-ROW did not live at Walden Pond. The Thoreaus say they've always been Thorough (pronounced the way we pronounce the word, not the way we spell it).
1 Reply
1
Reply Tue 16 Jul, 2013 10:05 pm
@MontereyJack,
Ceili is irish. Ceilidh is Scottish.

One thing about it, it beats 'aggis 'ands down.

A Super Deluxe: (except they'd probably use vinegar instead of the ketchup)

In Oz, we would use Vegemite, instead!

I was just about to respond to the ewwww post earlier, that one shouldn't knock something until they've tried it, so will now attempt an english equivalent (marmite) of your idea next time the old air fryer comes out.

Two slices of good quality white crusty bread, buttered well.
In between, arrange one layer of hot, golden chips ( none of that skinny fries malarky, chips with body) that have already been salted and vinegared on the plate (dark malt vinegar, EVERY time....Sarsons preferably).
A small amount of tomato (tomarter) sauce (ketchup) on the chips is optional.

Heaven!
2 Replies
1
Reply Wed 17 Jul, 2013 01:46 am
@Lordyaswas,
OK, Margs, have you ever tried ready salted crisps (plain....non flavoured)
sprinkled with a small amount of Worcestershire sauce? Even better if the crisps are home made and the sauce is sprinkled while they are still hot.

I feel mildly aroused just writing about it.

Americans please note : Worcestershire is not pronounced Warsesstershyre. Woostersheer will do, but the oo is a short one, as in wood.
Even though it has shire on the end, most Brits know it as just wooster sauce.
2 Replies
1
Reply Wed 17 Jul, 2013 01:48 am
@Walter Hinteler,
Walter Hinteler wrote:

If the "A" is pronounced like a very short "Ah", it's totally correct.
(His brother's name was Rudolf - so his firm was first called "Ruda" before it became "Puma")

Americans please note : Worcestershire is not pronounced Warsesstershyre. Woostersheer will do, but the oo is a short one, as in wood.
Even though it has shire on the end, most Brits know it as just wooster sauce.

Most Americans --at least in the Northeast (New England)part of the country-- do know how to pronounce it correctly. After all, the second largest city in Massachusetts is named Wooster which, for some strange reason known only to the powers that be, gets spelled as Worcester.

(Me mum, when she first came to this country, pronounced it Wore-chester until she got bored with being corrected time and time again.)
1 Reply
1
Reply Wed 17 Jul, 2013 01:56 am
@Lordyaswas,
Ough is a good one, and always has non english speakers in a tizz. So many variations in the way it's pronounced.

1 Reply
1
Reply Wed 17 Jul, 2013 02:03 am
@Lordyaswas,
Wasn't it G.B. Shaw who suggested that 'fish' ought to be spelled G H O T I ? That's GH as is 'tough', O as in 'women' and TI as in 'nation.' Perfectly sensible suggestion for Britspell, seems to me.
0 Replies
1
Reply Wed 17 Jul, 2013 02:15 am
@Lustig Andrei,
The only masculine noun meaning river or stream would have been fleuve. If you use beau, then that adjective modifies a masculine noun. So, it would have been beau fleuve, which is a much more likely candidate for becoming Buffalo.
1 Reply