No Re-Sale of Used Toilets - Why Exactly?

Forums: Plumbing, Toilets, Used, Water Conservation, Social Mores
Email this Topic • Print this Page
Reply Sun 23 Jun, 2013 06:03 pm
I was in one of the big box home improvement this weekend, to buy a replacement toilet seat - and I got into a discussion with a salesperson regarding the prohibitions about the re-sale of used toilets. While both of us were aware of that prohibition, neither of us could exactly articulate the reason why.

Aside from the all-too-obvious social, psychological and sanitary "issues" around the idea of a used toilet, on the assumption that most of them are essentially fired vitreous ceramic objects, and that absent cracks or other structural damage, with a sufficient amount of cleansing effort and motivation, all used toilets can be restored to their original state when they rolled out of the factory (although a couple of college dormitory and filling station restrooms I've encountered might have presented "special challenges").

Given that, what's the story on why no re-sale? Is it more for sanitary-related reasons, or is more an environmental deal, associated with the increased efficiency and water conservation capability of newer toilets? In all candor, this subject has not been weighing on me heavily, nor have I necessarily been contemplating the lost opportunities of having never tried to corner the world's used toilet market. Just wondering.
Type: Question • Score: 4 • Views: 2,274 • Replies: 4
No top replies
1
Reply Mon 24 Jun, 2013 08:29 am
@CDobyns,
The only reason I can think of for actively seeking out a used toilet, is if I had a nice old Victorian/Edwardian house and wanted to install a genuine vintage "crapper" or one like this... 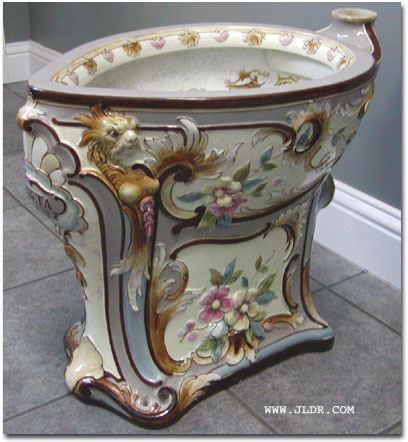 Mind you, the cost of such a thing would probably make me **** a brick, so it would be cracked in no time anyway.
0 Replies
0
Reply Thu 9 Oct, 2014 09:11 am
@CDobyns,
I don't know where you live, but in the USA, many folks go to the garbage dump to pick up used toilets and toilet parts. I know a person who picked up a red toilet seat, washed it in a good antiseptic soap and used it. Today a half-way decent seat goes for about $200 up, depending on source and material.

I know a another person who found a toilet bowl ( the thing that contains the mechanisms) in a garbage dump, took it home and found that it worked just fine.
0 Replies
1
Reply Thu 9 Oct, 2014 09:54 am
This might be a new regulation, or one that varies from state to state. . . or has always been true. I can remember shopping several times at a large building somewhere in the Los Angeles area that carried an inventory of used items for remodeling, from thick lengths of various woods to sinks, and I'm almost positive, say 99%, refurbished toilets.. I can picture a row of them in my memory. I could be wrong, they might have been from some special deal they got from a company going out of business.

I got one once from Home Depot - I had bought the toilet new there, and a day or two after a contractor installed it, it just didn't work well and I called him back. It turned out to have a rubber duck stuck in the bowl S-shaped chamber, clearly returned by a previous customer.
0 Replies
1
Reply Fri 9 Jan, 2015 11:30 pm
I think there is any problem where you live, because used toilet can be easily sold here.
0 Replies