Architects hope to build the world 's largest wooden skyscraper in Stockholm, Sweden, and claim that the skyscraper is "cheaper, easier and more sustainable than typical steel and concrete constructions".

Further proof that there are no termites in Northern Europe.
1 Reply
1
Reply Fri 21 Jun, 2013 07:41 pm
@Thomas,
No termites in my area in northern California; there were termites in LA, but my house was said to be built in 1906 so that was old growth redwood, famously resistant to the buggers. When I took my garage apart, I only found one bad redwood stud - that would have been eighty years later.
1 Reply
2
Reply Fri 21 Jun, 2013 07:41 pm
@farmerman,
farmerman wrote:

Do Norway's medieval stave churches count? They were built just before the the Ancient Puebloans began to abandon the Canyon de Chelly. 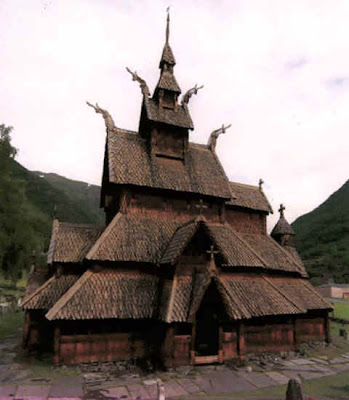 I'm not sure I've ever been in a wood house.


Noah's Ark
0 Replies
1
Reply Fri 21 Jun, 2013 08:15 pm
@ehBeth,
I only looked up the HEddal stave churches and It stated that they were re designed at least three times with a total rebuild of one of them in the 1950's. Im sure the others underwent similar roof rebuilding. ITS virtually impossible for such structures to withstand almost 1000 years of chemical erosion. The roofs are Shake an where do shake roofs last 1000 years? Im sure theres no miracle in the material here

WOOD will last indefinitely unless it gets wet. We have 300 year old barns in the county and, if a leak happens in the roof, a barn can rot away in 10 years if the beams aren't protected rom the weather.

Of the almost 970 of Norways stave churches that rotted or burned, most actually rotted because they were built in a fashion we call "pole barn" where the upright beams are driven into the ground. A pole barn has about a 50 year life , but many farmers will, after about 10 years, construct astone or concrete"Sill Plate" where the uprights (the staves) are resting in a masonry foundation and not on or in the soil.

0 Replies
2
Reply Fri 21 Jun, 2013 08:16 pm
@ehBeth,
Toronto/Ontario & Quebec would be the anomalies. I've driven across this country several times and I love the differences in building design. Ontario's gorgeous brick and stone houses are lovely. The round silos are especially cool. However, take a drive through the burbs. Houses may have lovely facades, but they are wood frame houses.
There are very few modern built stone houses in canada. And most brick houses are just skimmed with brick. Clay is tres expensive in the prairies. Even though our soil is full of it, it isn't good for firing. As a rule, bricks are imported.
Places like St. Johns revel in the multi-coloured wood houses.
1 Reply
1
Reply Fri 21 Jun, 2013 08:20 pm
@Ceili,
St John NB? I used to drive the length from Chatham to St John along the Acadian side. The houses would blind you with all the wild colors.
1 Reply
1
Reply Fri 21 Jun, 2013 08:22 pm
@ehBeth,
I just looked up a Wiki on the Borgund stave church and it mentioned that it was refit and repired and reroofed several times A lot of its interior was taken salvaged and returned after stabilizing (I am reading into that based on the words of the management society that has taken over the restoration and maintenance of the church.
0 Replies
1
Reply Fri 21 Jun, 2013 08:43 pm
@ehBeth,
Really???

there is no such thing as a "brick" house here, or anywhere this side of Colorado.

even the Koch boys and the other billionaires here frame with timber...

(rarely more than two stories, we do get nasty winds and such)
3 Replies
1
Reply Fri 21 Jun, 2013 08:49 pm
@Rockhead,
I remember driving cross country and seeing the last "brick" house in Utah somewhere. Long time ago, late fifties, but old eagle eye noticed the stark change. 'Course that was just one highway; forget which one.

My bro in law has one of the few concrete block (filled cells with rebar) houses in the Los Angeles area. Talk about hell on wheels to remodel even a smidge. I have a faint memory that one of those houses was faced (we called it veneered) with white brick, but maybe I'm imagining it.

wonder how an implode of a wooden building would work. Same as the other kinds?

I would think so as beams are beams and supports are supports but instead of cutting torches you would used saws to weaken the supports.
0 Replies
2
Reply Fri 21 Jun, 2013 09:37 pm
@farmerman,
farmerman wrote:

Im sure they've been rebuilt an recovered many times.


Some of them were, some of them weren't. Some of them were abandoned centuries ago, yet they're still recognizeable. In some climates, this kind of thing works; Scandinavia's seems to be one of them. Let's give this skyscraper a chance.
0 Replies