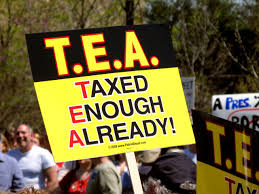 
Why did the IRS target these groups?

Who sent down the order?
0 Replies
2
Reply Wed 15 May, 2013 07:59 am
FBI Launching IRS Investigation Over Targeting Of Conservative Groups, Eric Holder Says

WASHINGTON -- The Justice Department is opening a criminal investigation of the Internal Revenue Service just as another probe concludes that lax management enabled agents to improperly target tea party groups for extra scrutiny when they applied for tax exempt status.

Attorney General Eric Holder said he ordered the FBI to investigate Friday – the day the IRS publicly acknowledged that it had singled out conservative groups.

"Those (actions) were, I think, as everyone can agree, if not criminal, they were certainly outrageous and unacceptable," Holder said. "But we are examining the facts to see if there were criminal violations."

Holder is scheduled to testify Wednesday before the House Judiciary Committee.

Three congressional committees already are investigating the IRS for singling out tea party and other conservative groups during the 2010 congressional elections and the 2012 presidential election. But Holder's announcement would take the matter to another level if investigators are able to prove that laws were broken.

Ineffective management at the IRS allowed agents to improperly target tea party groups for more than 18 months, said a report released Tuesday by the Treasury inspector general for tax administration. The report lays much of the blame on IRS supervisors in Washington who oversaw a group of specialists in Cincinnati who screened applications for tax exempt status.

It does not indicate that Washington initiated the targeting of conservative groups. But it does say a top supervisor in Washington did not adequately supervise agents in the field even after she learned the agents were acting improperly.

"The report's findings are intolerable and inexcusable," President Barack Obama said in a statement. "The federal government must conduct itself in a way that's worthy of the public's trust, and that's especially true for the IRS. The IRS must apply the law in a fair and impartial way, and its employees must act with utmost integrity. This report shows that some of its employees failed that test."


Who is launching an investigation into how Obama & Holder
are involved in this illegal and unconstitutional activity?
1 Reply
2
Reply Wed 15 May, 2013 08:35 am
@H2O MAN,
Quote:

Holder is scheduled to testify Wednesday before the House Judiciary Committee.

Three congressional committees already are investigating the IRS for singling out tea party and other conservative groups during the 2010 congressional elections and the 2012 presidential election. But Holder's announcement would take the matter to another level if investigators are able to prove that laws were broken.

Liberals will be forced to agree that as slimy and thin-skinned as Nixon may have been, his actions have nothing on those of the Obama Administration: fatal in its incompetence, unrepentant in its failures and unwavering in its belief that each of its actions is one of virtue.

Who is going to jail?
IRS gave liberals a pass; Tea Party groups put on hold

WASHINGTON -- In the 27 months that the Internal Revenue Service put a hold on all Tea Party applications for non-profit status, it approved applications from similar liberal groups, a USA TODAY review of IRS data shows.

As applications from conservative groups sat in limbo, groups with obviously liberal names were approved in as little as nine months. With names including words like "Progress" or "Progressive," these groups applied for the same tax status and were engaged in the same kinds of activities as the conservative groups.

The Justice Department wants to know if that was more than just mismanagement. Calling the IRS' actions "outrageous and unacceptable," Attorney General Eric Holder said Tuesday that he has asked the FBI to investigate. "We're examining the facts to see if there were any criminal violations," he said.

A federal official who has been briefed on the matter said the investigation could focus on potential violations of civil rights law, including targeting groups based on political affiliation and infringing free speech. The official, who is not authorized to comment publicly, said authorities could consider possible violations of the Hatch Act, which restricts political activities of government workers.


The Internal Revenue Service building in Washington.(Photo: Susan Walsh, AP)
The IRS inspector general, in an audit issued Tuesday, said the agency used "inappropriate criteria that identified Tea Party and other organizations applying for tax-exempt status based upon their names or policy positions" instead of evidence of political activity. The tax exemption requires that organizations have "social welfare" as their primary purpose, but IRS officials said the rules are unclear how much political activity they can engage in.

The White House says it knew nothing of the screening until a few weeks ago. In a statement Tuesday, President Obama said, "The report's findings are intolerable and inexcusable." Obama said he has directed Treasury Secretary Jack Lew "to hold those responsible for these failures accountable, and to make sure that each of the Inspector General's recommendations are implemented quickly, so that such conduct never happens again."

WASHINGTON -- In February 2010, the Champaign Tea Party in Illinois received approval of its tax-exempt status from the IRS in 90 days, no questions asked.

That was the month before the Internal Revenue Service started singling out Tea Party groups for special treatment. There wouldn't be another Tea Party application approved for 27 months.

In that time, the IRS approved perhaps dozens of applications from similar liberal and progressive groups, a USA TODAY review of IRS data shows.

• Bus for Progress, a New Jersey non-profit that uses a red, white and blue bus to "drive the progressive change." According to its website, its mission includes "support (for) progressive politicians with the courage to serve the people's interests and make tough choices." It got an IRS approval as a social welfare group in April 2011.

• Missourians Organizing for Reform and Empowerment says it fights against corporate welfare and for increasing the minimum wage. "It would be fair to say we're on the progressive end of the spectrum," said executive director Jeff Ordower. He said the group got tax-exempt status in September 2011 in just nine months after "a pretty simple, straightforward process."

• Progress Florida, granted tax-exempt status in January 2011, is lobbying the Florida Legislature to expand Medicaid under a provision of the Affordable Care Act, one of President Obama's signature accomplishments. The group did not return phone calls. "We're busy fighting to build a more progressive Florida and cannot take your call right now," the group's voice mail said.

Like the Tea Party groups, the liberal groups sought recognition as social welfare groups under Section 501(c)(4) of the tax code, based on activities like "citizen participation" or "voter education and registration."

In a conference call with reporters last week, the IRS official responsible for granting tax-exempt status said that it was a mistake to subject Tea Party groups to additional scrutiny based solely on the organization's name. But she said ideology played no part in the process.

"The selection of these cases where they used the names was not a partisan selection," said Lois Lerner, director of exempt organizations. She said progressive groups were also selected for greater scrutiny based on their names, but did not provide details. "I don't have them off the top of my head," she said.

The IRS did not respond to follow-up questions Tuesday.

Congressional critics say the IRS's actions suggest a political motives: "This administration seems to have a culture of politics above all else," said Rep. Bill Flores, R-Texas. "A lot of the actions they take have a political side first, and put government second."

Flores complained to the IRS last year after the Waco Tea Party's tax-exempt application was mired in red tape. The IRS asked the group for information that was "overreaching and impossible to comply with," Flores said: Transcripts of radio interviews, copies of social media posts and details on "close relationships" with political candidates.

When Flores complained last year -- asking pointed questions about the IRS treatment of Tea Party groups -- the IRS response didn't acknowledge that it had treated conservative groups differently. "They did more than sidestep the issue," he said. "They flipped me the finger."

Before the IRS started separating out Tea Party applications, getting tax-exempt status was routine -- even for conservative groups. The Champaign Tea Party's treasurer, Karen Olsen, said the process was smooth, with no follow-up questions from the IRS.

"If you suddenly see a great increase in some kind of activity, and you don't understand why, then it might be reasonable to look more closely at what's happening with those applications," she said. "I'm not certain that there was an error on the part of the IRS at all. I know that's not a popular opinion."

Some liberal groups did get additional scrutiny, although they still got their tax-exempt status while the Tea Party moratorium was in effect. For the "independent progressive" group Action for a Progressive Future, which runs the Rootsaction.org web site, the tax-exempt process took 18 months and also involved intrusive questions.

Co-founder Jeff Cohen said tax-exempt status is a privilege, so he didn't mind answering the intrusive questions, as long as those questions were consistent and fair.

"From my perspective, if the IRS can hold up legitimate Tea Party applications today and get away with it, then who knows if progressive groups will be held up and specially scrutinized in a few years. It's utterly unacceptable, if that's what happened," he said.
1 Reply
-1
Reply Wed 15 May, 2013 09:20 am


It's going to be interesting and telling how the administration
deals with all of these scandals during the coming weeks.
0 Replies
-1
Reply Wed 15 May, 2013 10:42 am