Forums: Italy, Italian Politics, European Politics, Beppe Grillo
Email this Topic • Print this Page
Reply Tue 5 Mar, 2013 07:12 pm
I've mentioned Beppe Grillo several times on a2k, generally in a desultory way. I sort of like him, used to read his blog, and I sort of don't, but I sure the hell like him more than Berlusconi. I don't think anyone has ever answered any of those posts of mine (there she goes nattering again..)

Now he's big news. As usual, I agree with him on some stuff and not on other matters.

Anyone following italian - thus euro - politics?
Type: Discussion • Score: 5 • Views: 1,277 • Replies: 15
No top replies
1
Reply Tue 5 Mar, 2013 11:02 pm
@ossobuco,
I have no knowledge of him other than that hes a comedian. A COMEDIAN?
I wonder what Italian stand up sounds like? Do they do really bad American accents?

"Grillo, a bearlike, trumpet-voiced man of fifty-nine with a pile of graying curls, is a distinctly Italian combination of Michael Moore and Stephen Colbert: an activist and vulgarian with a deft ear for political satire.


Grillo's popularity threw a wrench into the italian status quo in the recent election, resulting in a gridlock that if it continues will have repercussions passing italian borders.. and he followed up by refusing to join with the democratic left - or whatever that party is called (closest to his views) - in a coalition.
1 Reply
1
Reply Wed 6 Mar, 2013 10:15 am
@ossobuco,
is he one of the MArx Brothers?

s he one of the MArx Brothers?

<and I've no idea what he thinks about Karl>
0 Replies
1
Reply Wed 6 Mar, 2013 11:16 am
A German politician called him and Berlusconi for Clowns - with the reaction in Italy "We are not amused"
Anyway there is some politicians - and not just some - shaking all over with what is going on in Italy and regarding EU and Euro.

http://en.wikipedia.org/wiki/Beppe_Grillo
0 Replies
1
Reply Wed 6 Mar, 2013 11:41 am
Grillo and his 5 Star Movement are part of an interesting international political phenomenon: parties that are involved in the electoral process that have absolutely no interest in governing.

For a long time, the most prominent example was the Parti Québécois, which routinely sent MPs to Ottawa without the slightest interest in federal politics. Indeed, the entire notion of a secessionist party sending representatives to the federal parliament is thoroughly absurd, but that never bothered the PQ. The party refused to take part in any coalition, and seldom participated constructively in federal affairs. It was an electoral party that refused to govern and an opposition party that refused to oppose.

That was, I think, a fairly isolated example until 2009, when the Republican Party decided to take a similar approach. Instead of seeking to get its own legislative agenda passed, it decided that it would instead do nothing except thwart the Democrats' agenda. Like the PQ, it showed absolutely no interest in governing, just in gumming up the works of government.

Now we have the 5 Star Movement, which is a hopelessly naive bunch of political amateurs with the stated aim of being an opposition party -- regardless of who the governing party might be. It's the PQ all over again, except the M5S doesn't have the same kind of regional base. It's as if the M5S ran on the slogan: "Governing is Hard, but Opposing Things Is Easy!"

Frankly, I think Grillo and the M5S have a limited shelf life. Change comes swiftly in Italian politics, and I doubt the movement will be around ten years from now. Realistically, I don't even think it will last five.
1 Reply
1
Reply Wed 6 Mar, 2013 01:41 pm
@joefromchicago,
My impression from some reading is that a lot of the 5 star movement people are more interested in governing than Grillo is. He can't be in parliament anyway, since he has a conviction in his past, manslaughter perhaps - some traffic accident.

His blog goes back t0 late 2005, though the 5 star business is more recent, 2009, I think. I used to read his blog off and on, just as I read about Berlusconi off and on, and Monti, and others. I read in passing a lot of silly/serious stuff about Italy and its troubles. Which reminds me, I need to go back to reading Only in Italy - some guys (I think they're guys, not sure) from Sicily that make fun of Italian news articles.
1 Reply
1
Reply Wed 6 Mar, 2013 02:05 pm
@ossobuco,
Ah well, the Only in Italy people haven't posted in the blog since May 2012.
1 Reply
1
Reply Thu 7 Mar, 2013 07:25 pm
@ossobuco,
So, lest anyone think I am all Grillo all the time, I disagree with what I've read he thinks on some matters, but I get his view about tossing fish at the parliament and making it regenerate. Probably impossible.

One more article - and I'd quote other places but not there yet (I don't think the nyer is the only source, I just haven't accumulated more links yet):
http://www.newyorker.com/online/blogs/newsdesk/2013/03/beppe-grillo-is-serious.html


I'd like to hear Fbaezer's take on this whole scene.

His movement reminds of the Fronte dell'Uomo Qualunque.

During WWII, a magazine appeared in Italy, L’uomo qualunque (The Everyday Man), opposed to a multiple political parties regime and to the role of the State. On the first issue, it was in line with Fascism; on the other, it was agaisnt it. It was against politics and politicians.
En 1945, its director, Guglielmo Giannini, proposed a "neutral government, headed by an accountant, to be in charge for one year and not be re-elected". Since in Italy even people who hate politics make politics and people who hate political parties make political parties, the Front of the Everyday Man was born.
Giannini tries the Front to go with the Liberal Party (remember that Liberals in Europe are rather conservative), but the great historian Benedetto Croce, leader of the Liberals, opposes.
What characterized the qualunquisti? They were against limits for freedom, against taxes, against "the thief government", "abusive businessmen" and "corrupt unions". The Fronte dell’Uomo Qualunque got over a million votes in the 1946 elections. It was in opposition to the National Unity government that was formed after the war.
In 1947, the United States press their European allies to exclude the left wing parties, and the Christian Democrats in Italy ask the qualunquisti to be part of a new coalition.
Giannini says yes, and with this, signs the death penalty for his party. The members, dissilussioned because the leadership was seduced by the evil Political Power, leave the Front in flocks... many of them end in the Neofascist movements.

Beppe Grillo's movement is bigger, but has several limits.
One is the dependance of a charismatic leader (a problem Italy has had since the times of the Caesars).
Other is the fact that some of its adherents come from the extreme left; others, from the extreme right, and many from the center-left and center-right. You can't take any positive strategic decision without maddening a big group of followers. So Grillo stays put with negative decisions.

As a bonus, the logo of the Fronte dell'Uomo Qualunque:

This is the 2013 logo of the Grillini 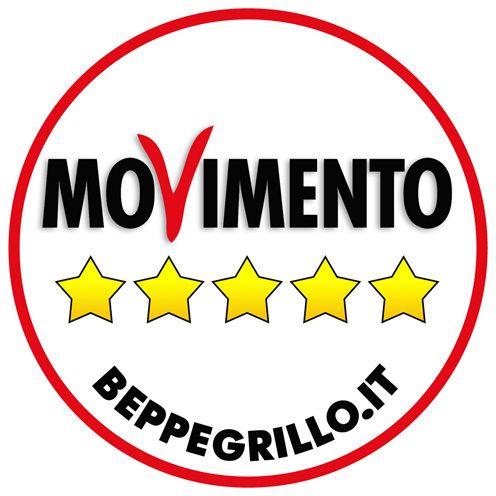 Notice that the adress of Beppe Grillo's blog is on the party's logo.
1 Reply
1
Reply Thu 7 Mar, 2013 09:05 pm
@fbaezer,
Well, eh, web smart logo.
It surely takes more than one person, however engaging from time to time, to move a populace..
oh, wait.

I don't want to go into knocking italian culture - I am not them, I have my own culture mess - but I don't know what to guess re what will happen.