Forums: Nyc, Politics, Nyc Mayoral Election, Bye Bye Bloomberg, nyc2013
Email this Topic • Print this Page
Reply Fri 14 Sep, 2012 06:48 am
I know its probably far too early for this thread. But you know, this could be one of the funnest mayoral races (no matter what city/country) that have ever been in recorded history. At least for me, its the most anticipated one I have ever known.

Mayor Bloomberg is on his way out. For better or for worse. He won't be able to avoid those pesky term limits like he did the last time.
http://en.wikipedia.org/wiki/New_York_City_mayoral_election,_2013

Jimmy McMillan, perennial candidate and founder of the Rent Is Too Damn High Party[21]

And the infamous soundbite activist, "rent is too damn high" meister:
Jimmy McMillan is Running for Mayor (Again)
http://politicker.com/2012/09/jimmy-mcmillan-is-running-for-mayor/

I'll do a backflip for joy if Spitzer throws his well tussled hat into the ring.

I hate Raymond Kelly and so far the only Republican I despise that has the potential for contender for the office. Ms. Davis' possibility seemingly is as much a joke as McMillan's never to come to fruition political career. Didn't know that Kelsey Grammer was either a Republican or a potential office runner. Don't know enough about his political views right now to comment.

At least for now, I'm more interested in the others in the possible Republican camp that have not be highlighted in this unexpectedly informative Wiki page. I now have a greater respect for Wikipedia because this page is far more detailed then I ever expected it to be.

Yet he's already behind a six pack of 8 balls placed inconveniently in his own mayoral path:
Monthly MetroCard Set to Rise to $112; or, Why Joe Lhota Is Doomed
http://nymag.com/daily/intelligencer/2012/12/metrocard-fare-hike-monthly-112-lhota-mayor.html
1 Reply
1
Reply Wed 19 Dec, 2012 12:18 pm
@tsarstepan,
Probably doing it so he can distance himself from the MTA before the fare hike goes into effect.

Figures if he is out of there long enough people will forget his misdeeds and missteps (blizzard horror springs to mind).

He will be the Republicans answer to the twit Christine Bloomberg...er, I mean Quinn who has been trying to distance her little old self from Mikey these last few months. Too late for her though.


It seems Lhota didn't return Molinari's phone calls, so rather than stick with a long time Republican (Lhota) he's taking on a new pal in a man who was a Democrat until just a few months back.

Before anyone says:
'so what?'
Keep in mind that this is Guy Molinari who was a major part of Staten Island and therefore NYC politics for more than a quarter of a century. (Assembleyman, Congressman, Borough President) and he has a boat named after him. Additionally, his daughter Susan was a big part of NYC political scene for several years (City Council, Congresswoman) Staten Islander's love the Guy and listen to him. Lhota could be seeing an early end to his bid.


1 Reply
1
Reply Wed 13 Feb, 2013 07:22 pm
@Sturgis,
Thanks Sturgis. And oooh! A new name I'm not familiar with: Adolfo Carrion of the Bronx. He's going to have to do a lot of PR to get his name out for name and issue recognition.
0 Replies
1
Reply Mon 11 Mar, 2013 06:09 am
Quinn Campaign Kicks-Off with Well Orchestrated Tour
http://www.wnyc.org/articles/wnyc-news/2013/mar/10/quinn-campaign-kicks-well-orchestrated-tour/
0 Replies
1
Reply Tue 2 Apr, 2013 11:19 am
New scandal today:
The Brian Lehrer Show
[State] Sen. Smith and Councilman Halloran Arrested in Plot to Rig Mayor's Race
http://www.wnyc.org/shows/bl/2013/apr/02/sen-smith-and-councilman-halloran-arrested-plot-rig-mayors-race/
0 Replies
1
Reply Thu 11 Apr, 2013 07:40 am
Anthony Weiner, Disgraced Former Congressman, Considering Run For New York City Mayor
http://www.huffingtonpost.com/2013/04/10/anthony-weiner-nyc-mayor-huma-abedin-interview_n_3050499.html
0 Replies
2
Reply Thu 11 Apr, 2013 10:34 am
@tsarstepan,
Time to add another name to the mix!
The Reverend Erick Salgado from Staten Island has tossed himself into the crowd apparently as a Democrat. He says he's a 'Conservative Democrat'

Born in the Bronx, Rev. Salgado is a pastor of Iglesia Jovenes Cristianos (Young Christian Church) in Brooklyn, which serves 1,100 members in the tri-state area. He also founded a radio ministry, "Radio Cantico."

Rev. Salgado said he's formed a broad coalition around his mayoral campaign -- bringing in members of the Russian, Orthodox Jewish, African-American, Polish and Korean communities from across the boroughs.

He defines himself as a "conservative Democrat," and points out he is the only Latino seeking to run on that party's line. Former Bronx Borough President Adolfo Carrion, a former Democrat, is seeking the Republican nomination. 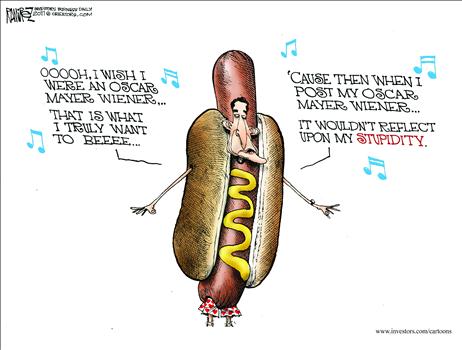 is it too early to announce that Anthony Weiner is the incoming NYC mayor?

is it too early to announce that Anthony Weiner is the incoming NYC mayor?


He's got an uphill battle of his own making. Right now, he's the long shot dark horse allegedly in the race.


I have not seen any polling but I don't believe that...he is a fine politician who very many believe was treated unfairly by the party. His mistakes were relatively minor.
0 Replies
0
Reply Mon 15 Apr, 2013 02:13 am
@tsarstepan,
tsarstepan wrote:

He's got an uphill battle of his own making. Right now, he's the long shot dark horse allegedly in the race.

Most political experts surveyed by ABCNews.com believe he could.

"People are much more forgiving of errors relating to sex than those relating to money," said Mitchell Moss, a longtime New York political analyst and professor at New York University. "He can run as the outsider."

Weiner, 47, resigned from Congress in 2011 after tweeting lewd photos of himself to women and then publicly denying that the photos were of his body parts. He later confessed that he had taken the photos and sent the messages to women who were not his wife.

Now, Weiner is taking steps to reenter a political race with wife, Huma Abedin -- who is an aide to Hillary Clinton -- by his side. In an interview with New York Times Magazine, published online this morning, Weiner said he may consider running to succeed Mayor Michael Bloomberg.

"To some degree, it's now or maybe never for me, in terms of running for something," Weiner told the magazine. "Also, I want to ask people to give me a second chance."

In March, Weiner spent more than $100,000 on polls gauging whether the public could forgive him -- and vote for him -- after the scandal.

"He wouldn't be doing this if there wasn't some indication he could. He's still an astute politician, and so is (Huma)," said Liz Benjamin, a political analyst for YNN's Capital Tonight. "(Huma) is such a close, guarded person, to put herself out there to this degree, there is something really big behind this. They are really thinking seriously about it."


NYC needs a mayor that supports the US constitution.
NYC does not need another liberal mayor.
0 Replies