Bisexuality, as related to heterosexuality and homosexuality

Forums: Bisexual, Relationships, Gay, Sexuality, Straight
Email this Topic • Print this Page
Reply Fri 24 Aug, 2012 11:10 pm
So some friends and I recently had an interesting discussion on bisexuality, and I wanted to get other people's opinions.

Would you say that a bisexual is BOTH straight AND gay, or that they are NEITHER straight NOR gay? Like if you were to use a ven diagram, would you have a straight circle and a gay circle and bi would be where they intersect, or would each have their own seperate circles?

I can sort of see both ways, so I'm not sure. Like, if you ask a bisexual, not knowing their orientation, if they're straight, it seems like the more correct answer would be "No, I'm not straight, I'm bi." Same if you were to ask them if they were gay. "No, I'm not gay, I'm bi." which leads me to think that bi is neither straight nor gay. 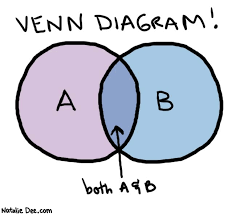 As soon as you learn how to spell Venn and separate you can begin to contemplate your sexuality.

If you were making a Venn diagram, I don't think the circles would be labeled "heterosexual" and "homosexual" -- I think it would be more accurate if the circles were labeled "attracted to the opposite sex" and "attracted to the same sex" (and then the overlap would be "attracted to either sex").
0 Replies
0
Reply Sat 25 Aug, 2012 07:01 am
@laboi45,
Maybe a bi doesn't care what gets him or her off. It's a manipulation exercise. That can be, has been, seen as proper libertinism. Practitioners tend to have a certain contempt for those who they see as hung up on one or the other of the sexes. Being choosy.

A dog might suit if it could be trained to get the manipulation learned. And had its teeth removed.

My problem is that I find other men ghastly. Often very useful. Sometimes less so. Their trousers don't help for a start. Watching a pair getting out of a car for example. Compared to a lady in a fairly tight skirt. Underpants just don't ring any bells for me like knickers do. Or bloomers. Kecks. Trollies. I hate "panties" because the word reminds me of trousers. My attitude to "unmentionables" is obvious from the foregoing.

I think, in general, bi is a young man's game. A period when the manipulation is sufficient without any mental inputs and a few of the chaps still look vaguely passable to those who don't believe in any unnecessary risks. Where the second situation shows the sets as being mutually exclusive. (aka disjoint sets)

Or does it not even really matter, as Butrflynet would probably say.

And Spendius, I’m afraid I didn’t quite understand what you were trying to say with that post. Are you saying that bisexuality is narcissistic and cynical? Which may go deeper than intended with the initial questions, haha.
0 Replies