I read quite a bit so something newish would be good. Nothing heavy. Comedy, mystery, or thriller would all be welcome suggestions.

I ordered a sample of "The Snowman" which was well reviewed but couldn't quite get into it based on the sample. Do I need to just stick with it?

I'm currently reading "Confessions of a D-list Supervillain" and it's pretty funny so something like that would be good.

Has anyone read a good page-turner or anything laugh out loud funny lately?

Thanks!
Type: Question • Score: 15 • Views: 4,887 • Replies: 43
3
Reply Tue 26 Jul, 2011 10:31 am
@boomerang,
I suggested elsewhere but can't suggest it enough. The Flavia de Luce mysteries by Alan Bradley are quite original, funny, moving, and delightfully mischevious.
Start out with Sweetness at the Bottom of the Pie.

I read all three now and am uberanticipating the fourth book coming out this November.

I've read that DrewDad. I agree it's an excellent book!
2 Replies
2
Reply Tue 26 Jul, 2011 12:23 pm
@boomerang,
Read any Terry Pratchett lately?
1 Reply
1
Reply Tue 26 Jul, 2011 01:44 pm
@DrewDad,
Noddy was always trying to get me to read Terry Pratchett but for some reason I could never get into it. I can't remember which one it was but I tried several times to get it started and always put it aside.

Is there a specific book that you recommend? Are they all part of the Discworld series? Do you have to read them in order?

That might be something that holds me back. I'm not a huge fan of series. Even Harry Potter got boring for me. I never could finish the Lord of the Rings series. Or Dune. I suppose I'm fickle.
2 Replies
2
Reply Tue 26 Jul, 2011 01:54 pm
@boomerang,
Priceless: How I Went Undercover to Rescue the World's Stolen Treasures by Robert K. Wittman

Non-fiction, but a lot of fun. I think you will really like it.
1 Reply
2
Reply Tue 26 Jul, 2011 02:00 pm
@boomerang,
i could never get into Pratchett either, but i did enjoy his collaboration with Neil Gaiman called, Good Omens: The Nice and Accurate Prophecies of Agnes Nutter, Witch

The book is a comedy and a quasi-parody of the 1976 film The Omen (as well as other books and films of the genre), concerning the birth of the son of Satan, the coming of the End Times and the attempts of the angel Aziraphale and the demon Crowley to avert them, having become accustomed to their comfortable situations in the human world. A subplot features the gathering of the Four Horsemen of the Apocalypse—War, Famine, Pollution (Pestilence having retired in 1936 following the discovery of penicillin), and Death—the last of whom is characterised in a manner reminiscent of the personification of Death in Pratchett's Discworld novels and calls himself Azrael before his final exit.

Is there a specific book that you recommend? Are they all part of the Discworld series? Do you have to read them in order?

Colour of Magic is the first and I enjoyed it. You have to be ready for silly, and a send-up of fantasy tropes. Cohen the Barbarian is particularly hilarious, IMO.

Even Harry Potter got boring for me.

Ditto. I hung on, although through most of the later books I though Harry was an idiot.

I never could finish the Lord of the Rings series.

They're a bit dated. The art of the fantasy novel has progressed to the point where I find these tedious, nowadays. I still like The Hobbit, though.

After the Golden Age
Carrie Vaughn 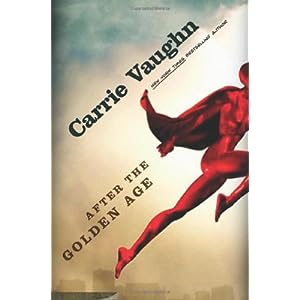 Can an accountant defeat a supervillain? Celia West, only daughter of the heroic leaders of the superpowered Olympiad, has spent the past few years estranged from her parents and their high-powered lifestyle. She’s had enough of masks and heroics, and wants only to live her own quiet life out from under the shadow of West Plaza and her rich and famous parents.

Then she is called into her boss’ office and told that as the city’s top forensic accountant, Celia is the best chance the prosecution has to catch notorious supervillain the Destructor for tax fraud. In the course of the trial, Celia’s troubled past comes to light and family secrets are revealed as the rift between Celia and her parents grows deeper. Cut off from friends and family, Celia must come to terms with the fact that she might just be Commerce City’s only hope.

This all-new and moving story of love, family, and sacrifice is an homage to Golden Age comics that no fan will want to miss.
1 Reply
1
Reply Tue 26 Jul, 2011 02:14 pm
@DrewDad,
You might have talked me into giving it another try!

The only reason I stuck with Harry Potter was to figure out what Snape was all about.

I loved the first book of Dune and wanted very much to like the others.

I'm another Terry Pratchett fan. Almost anything with a wizard on the cover should be pretty funny. Not all of his books are set on Discworld. He has some even set for a younger audience (Hatfull of Sky, Johnny and the Bomb, and Maurice and his Educated Rodents). His books tend to be convoluted and sometimes that throws people.
0 Replies
2
Reply Tue 26 Jul, 2011 03:13 pm
THis just came out in English... (the author is German)

"Bad Karma" is such a funny book! I enjoyed it tremendously, especially
when the lead character meets Casanova while reincarnated as an ant.

This debut novel follows the trials and tribulations of Kim Karlsen, a television personality whose career obsession brings her some serious cosmic repercussions. In her quest to dominate the airwaves, Kim cheats on her husband, neglects her daughter, and mistreats her staff. It all seems worth it when she wins the biggest German Television Award, but sadly on the very same night she is crushed to death by debris falling from a Russian space station....At the gates of Heaven, Kim is informed that she has collected too much bad karma in her life, and has a long road of atonement ahead. Reincarnation as an ant teaches her a few lessons in humility, ad she experiences life as a guinea pig and as a beagle before regaining human form just in time to sabotage the marriage of her husband to her back-stabbing best friend.