Forums: Snakes, Language, Science, Propulsion
Email this Topic • Print this Page
Reply Mon 11 Apr, 2011 09:10 pm
Mo has decided to do his science project based on his hypothesis that the rougher the surface the fewer the "bends" a snake has to make to move a certain distance.

Say, if he's moving over glass he will need to make a really tight "squiggle". Over rocks he will have a looser "squiggle".

Is there an actual word that describes this type of propulsion?

How Do Snakes Move?
There are four types of motion that snakes use to get around. Which one is used depends on the type of snake, their habitat, and their muscular design.


http://www.icehouse.net/treehug/snakes.htm
The 4 types of motion are also listed on other snake sites.

Snakes have four ways of moving around. Since they don’t have legs they use their muscles and their scales to do the “walking”.

Concertina method: this is when snakes bunch themselves up and then throw themselves forward.

Serpentine method: This motion is what most people think of when they think of snakes. Snakes will push off of any bump or other surface, rocks, trees, etc., to get going. They move in a wavey motion. They wouldn’t be able to move over slick surfaces like glass at all.

Sidewinding: This method is similar to an inchworm’s movement. The snake will lift the middle of its body up and then push it down forcing its head to move forward.

Rectilinear Method: This is a slow, creeping, straight movement. The snake uses some of the wide scales on its belly to grip the ground while pushing forward with the others.

crawl
–verb (used without object)
to move in a prone position with the body resting on or close to the ground,
as a worm or caterpillar, or on the hands and knees, as a young child.

It sounds like what Mo wants to test is whether his snake can/would need to switch between serpentine and rectilinear locomotion based on what it is crawling across.

His theory is that on a smooth surface his snake will have "bend" more, into tighter "bends" like this:

and that on rough surfaces he'll be able to straighten out because he'll get better traction: 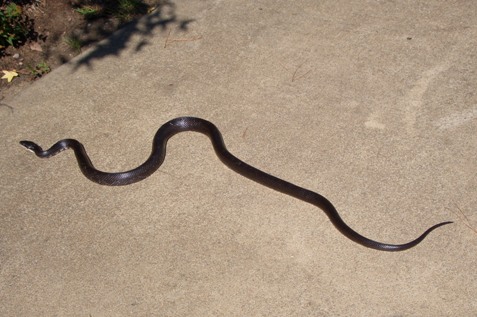 The way Mo described it to me is that he thinks the less traction available the more the snake will have to "bend" (rely on its muscles?) to move the same distance.


1 Reply
2
Reply Tue 12 Apr, 2011 08:27 am
4 types of snake motion
Which one is used depends on the type of snake, their habitat, and their muscular design.
It seems to me that Mo's hypothesis is at least partially correct. I suspect that sidewinders would not change their method of movement regardless of their environment because that (sideways) is the way their muscels work.
The reason a snake moves the way it does would generally be because of the evolutionary process of adapting to its (usual) environment (habitat) rather than the immediate environment the snake is in.

Is walking and running the same thing for people? walking up stairs is essentially the same process as walking in flat ground... Or is it?

How will you induce the snake to move so that you can test it?

That's Mo's problem to work out (I'm just helping with terminology and basic organization) but I think that's why he decided to measure distance and "bends" instead of speed.

Based on my observation a snake will seek shelter when exposed so I imagine providing some familiar hiding material would urge the snake to move from an open location to a safer one. Mo has spent many more hours observing snakes than I have. It'll be interesting to see what answer he comes up with to this problem should it present itself.

Mo's 10. He knows a LOT about snakes. I think this idea came about just from watching and playing with his pet Strangles in different areas.

He rejected this idea because Strangles had shed recently and because weighing snake poop sounded kind of difficult and awful.
0 Replies
1
Reply Tue 12 Apr, 2011 11:07 am
@Joe Nation,
Yeah, he's going to video tape it because he thought that would be the best way to count the number of "bends".

I thought you said that you were a long time hardware man, Joe.

At Mensa Regional Gatherings, thay never let u take the snakes up
in the Hot Air Balloons.