Cycloptichorn
0 Replies
1
Reply Fri 25 Feb, 2011 11:24 am
The Solutreans were damned good at this. There was a burial of several spear heads, and which is thought to have been ceremonial, as the spear heads were so large and so thin as to have been useless for hunting, or so it is thought. The spear heads were not grave goods, they had been buried by themselves. The archaeologists who found them thought it was a ceremonial offering of some kind. 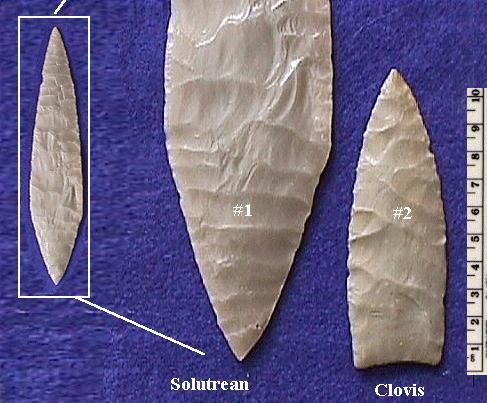 In this image, you see a comparison of one of the Solutrean spear heads to a typical Clovis spearhead. It is possible, if the hypothesis of the archaeologist who found it is correct, that the Solutrean knappers made special large spear heads with no practical value for ceremonial purposes. The Clovis point is about 10 inches long--the Solutrean (or allegedly Solutrean) point is 20 inches long or more, and very wide. It is also thinner than the Clovis point.
0 Replies
1
Reply Fri 25 Feb, 2011 11:40 am
@Cycloptichorn,
K and I have been reading about the Native man who wandered into Northern Cali civilization in the early 1900s - Ishi. He demonstrated the flaking process that had been handed down to him...

The Clovis consensus had too many reputations behind it to evaporate easily.

Micheal Collins of the University of Texas wrote:

"The best way to get beaten up, professionally, is to claim you have a pre-Clovis site"

Here's a summary from the BBC of a film they did on the Solutrean hypothesis. The quotes above are from that source.
0 Replies
1
Reply Fri 25 Feb, 2011 12:10 pm
@Setanta,
Ishi in two worlds by Theodora Kroeber. She was married to the Berkeley guy who basically hung out with Ishi and learned how to communicate with him: Alfred Kroeber.

What I love about it is Theodora's beautiful prose married to her intimate knowledge of Ishi - through her husband's close association with him.

He lived at UC's Museum of Anthropology...cause they didn't know what else to do with him... Living relic.

Fascinating account, huh?
1 Reply
1
Reply Fri 25 Feb, 2011 12:35 pm
@Setanta,
Yes! He wandered out of the mountains...Kroeber reported he emerged from the Lassens. But, Shasta and Lassen are so close, he could have migrated between the two. Nomadic guy.

The story goes that utility workers stumbled upon Ishi and 2 other guys at their campsite...and then 3 years later, Ishi wandered into a slaughterhouse yard full of cows, thinking he'd be killed.

My book has pictures.

Interesting story: K had told me this was his favorite book of all time at least a year ago...and I file these things away... So, we are driving down a major thoroughfare near Menlo Park, arguing about something...nothing serious... but I am driving and just looking at the passing storefronts whizzing by, 'cause that's what I do...and I see, displayed in the window of a quaint little mom and pop bookstore, "Ishi" in big print.

K has dragged me in countless bookstores, searching for this particular title, written by the Kroeber team, so I inserted "Ishi" with a jabbed finger in the direction of the bookstore we'd just passed into our quippy dialogue, and we continued to bicker to the front door of the bookstore...without missing a beat.

It really is such an educational, emotional, satisfying read. $10 at Amazon.

0 Replies
1
Reply Wed 9 Mar, 2011 04:40 pm
@Lash,
You seem to know something about anthropology. Maybe you can answer a question for me or point me in the right direction. If radiocarbon dating is accurate to between 58,000 and 62,000 years, how do anthropologist determine the age of specimens like Sahelanthropus tchadensis which lived in Chad, West Africa 7.0 to 6.0 million years ago? I think I just remembered how they do it. Don't they determine age by the age of the layer of earth they found the specimen in?

BTW - I am writing a book. Would you like me to notify you when its available on Amazon or B&N?
1 Reply
1
Reply Thu 10 Mar, 2011 06:34 am
@Dasein,
They use several means two of which are isotope dating tricks. The first technique is the _in situ relative and "absolute" stratigraphy age. They establish the sequence of stratigraphic sequence from which the fossil was extracted. (The stratigraphy has to be carefully correlated with areas surrounding so that the specimen is truly in place and was not later brought in by transport)
The stratigraphy units are dated using a relict paleomagnetism trick which reads the ages of magnetic normal and reveresed periods and dates them by "Chron sequences". The trick is called the "GEomagnetic Polarity Time SCale[GPTS]) (We have books and books of worldwide data of magnetic reversals in time and we know that there were 14 magnetic polarity changes during the pweriod between 5 and &.8 mya). Using this technique, for the period in question, the stratigraphy could be narrowed down to about 200000 years either way)

The skull itself is analyzed by "Absolute" methods using many other isotopes other than C14. Most of these involve Potassium and argon or argon/argon, as well as Uranium equilibria and alpha rack and more and more techniques each decade.

LAst and not leat are evaluating the fossils in which the skull is found. These establish a reasonable sequence of biostratigraphy. In all cases, several techniques are used on the specimen mostly because we can, and secondly, many institutions have ample resources to collaborate in these types of projects
0 Replies
1
Reply Thu 10 Mar, 2011 07:12 am
ya know what i found interesting?

and the computer basically told them to look in sand dunes.

So they went to Alaska?

Ok what do i know


0 Replies
1
Reply Thu 10 Mar, 2011 07:17 am
I think, DP, that they were intent on looking for sites in Alaska, and the model told them to look in sand dunes. Lotta sand in places which were repeatedly scraped clean by the glaciers.
1 Reply
1
Reply Sun 13 Mar, 2011 07:59 pm
Maybe even a little earlier in a different location...
Earliest Traces of Humans in Americas Found in Submerged Cave
http://www.environmentalgraffiti.com/anthropology-and-history/news-has-earliest-trace-humans-americas-been-found
1 Reply
1
Reply Sun 13 Mar, 2011 08:29 pm
@Green Witch,
cool. I think that with more and more archeo exploration in some very wet places , we will find more stuff like this. Theyve been planning to do severl systematic surveys of the coastal plains out to the con shelf in order to locate and map what would have been paleoindian fish camps and villages.

I saw one huge hoe like artifact made of jasper that was dragged up in a menhaden net near Hen and Chicken shoals off Delaware Bay
0 Replies
1
Reply Sun 13 Mar, 2011 08:32 pm
@Setanta,
Quote:

the model told them to look in sand dunes. Lotta sand in places which were repeatedly scraped clean by the glaciers.

Also, sand dunes had collected as "loess" deposits . These showed us areas where the glaciers actually never came and were open to foot traffic during the time that all around was covered with ice. There were a few of these ice free zones across Alaska from NW to SE.
1 Reply
1
Reply Sat 11 Feb, 2017 06:23 pm
@farmerman,
The period of ridicule seems to be ending in a bevy of new (qnd beautiful) pre Clovis sites tht daate (C14 that is) to 18 to 21K years .
Most of these really old sites are long the East Coast of the US and in Chile. Recent(2016) articles in NATURE and March 2017 EARTH mag, state that Archeology is now clustering round a 4 zone of entry into the Americas by ancient folks, with what looks like an admission that data is favoring a multi-pathed entrey into these continents

1 The earliest (oldest) path is the Atlantic Coastal route with tools similar to modified bifacial point s, similar to Solutrean points. % sites hqve been cataloged with dates of 14.5 to 20K years old. PLUS, several offshore sites hve yielded artifacts that place human hunters and megafauna prey in contact. This supports a Solutrean source .

2The Western "Kelp Hiway" route. another coastl pathway that sttes that the early exporers used water craft to skirt along the ice fields and the sailors relied on resources in the Kelp beds for food. The dtes of these explorations and settlements is about 13K years

3The Southwest Route-However the South American sites were settled (qnd when), travelers from the few sites like Monte Verde Chile seemed to travel N n East to settle in the Gulf Cost of US qnd the Southern Appalachians

4 Last (by time of occurence) was the traditional Beringean migration through an "ice free" zone. The data is now quite good that the "Ice free"conditions didnt occur at 13.5K years as ws preached by the Clovis First people. Then, when the ice free conditions occurred, Core data suggests that it took almost half a millennium to regrow vegetation that attracted animals which were used for food by the early migrations.
So the continents were, by all evidence we see, already populated with widely spread out settlements of Paleo hunter gatherers.
So, it seems that archaeologists, first scornful of anything that suggested the Paleo people were able to build an trvel in boats, are now clustering around a hypothesis that more strongly relies upon boat travel in both the Pacific and Atlantic routes.

Ill keep tuning in (actually I was just reading my mags)