gelato in Rome, or other places

Forums: Italy, Rome, Gelato, Gelato Making, Paletas
Email this Topic • Print this Page
Reply Thu 4 Nov, 2010 05:54 pm
The first time I tried gelato at Giolitti, in 1988, I knew I found heaven. But that was also the first time I ever tried gelato at all, thus I'm no one to listen to. Same with the fifteenth time, still heaven. I've talked about the place before at a2k, here: link from 2004, http://able2know.org/topic/19483-2#post-589668
Typos mine, of course. I type very speedily when I copy something, and mess up big time.

That's an olden purveyor in Rome's center, and a dear favorite to me.
However, other places have become popular, places I haven't tried and no doubt I never will. But that doesn't stop my interest. I hope to be back with some gelateria photos.

Meantime, Walter Hinteler visited here in New Mexico and some of us went to La Michoacana for paletas, and now I'm similarly enamored and the paleteria is only a few miles from me. Walter mentioned that gelati in italy are now all industrialized, in contrast to those particular paletas.
Is this true? (I haven't been to italy in 10 years.)

Gelateria del Teatro, 70 Via di San Simone, tucked in an alley halfway between Piazza Navona and Ponte Sant'Angelo, has overtaken old favorites Ciampini and Giolitti in the Roman gelato sweepstakes. Opened a few years ago by an Italian-Peruvian couple, the place uses only fresh, natural ingredients and specializes in out-of-the-ordinary flavors such as sesame, caramel with pear and 80% cacao cioccolato puro. Plus, there are windows between the shop and kitchen so people can see how Del Teatro makes its manna from heaven.

http://www.msadventuresinitaly.com/blog/2006/11/30/tour-del-gelato-choco-cult-a-milano/
a photo from that blog - 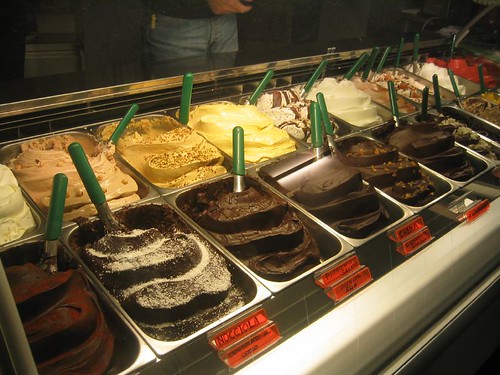 0 Replies
1
Reply Fri 5 Nov, 2010 08:54 am
What I'd like to know is can you find really great gelato in the US? Or Boston more specifically. When I went to Italy, I fell in love with gelato. It was one of the most wonderful things I've eaten.

So when I returned home - I went directly to the north end in Boston and got me some gelato. Crap (at least compared to what I had eaten in Italy). I was very disappointed. I've seen eaten gelato here, but not close to the same as Italy. As it really isn't financially feasible to travel to Italy to get my fix - anyone know any where I would not have to fly to have that yummy experience again?
1 Reply
1
Reply Fri 5 Nov, 2010 09:27 am
I found a local place near me where they make decent gelato. While not quite as good as what I remember having in Rome, it is very dense, creamy and satisfying, and a lot cheaper than hopping on a plane to Italy.