I just deleted my FB account and I feel free!!

Forums: Internet, Social Networking, Facebook, Fb
Email this Topic • Print this Page
Reply Fri 17 Sep, 2010 02:35 pm
I never went there anyway and rarely checked anyone else out. I basically signed up to play Scrabble with some sisters, but I've found a better game site, so this feels great!

eoe - as long as you're having fun, go for it

By the way, you can't 'Delete' your account there. Only 'Deactivate' it.

You can 're-activate' it by re-logging in. The deactivation prevents others from accessing your page.
0 Replies
3
Reply Fri 17 Sep, 2010 08:53 pm
@Mame,
San Francisco tech guru, Leo Laporte deleted his account.

0 Replies
1
Reply Sat 18 Sep, 2010 05:59 am
I spend a great deal of time on facebook to keep me and my business in the front of people's minds primarily. For thatpurpose I've found it very effective.

Here's a for instance.
We are going to Greensboro next month to crack that market. Through facebook I have contacted people from the Triad who used to come out to see me in the 80's and rounded up a lot of people. I also have a couple of girls who attend school up there who follow the band around Raleigh when they're home from school and they are flyering the entire UNCG and Guilford campuses so we get a young crowd as well. Because we get the entire door and/or a guarantee, this means real money to us.

I also have contacted and reconnected with many personal and business friends from the past who are still involved in teh music business.

I muddled through and somehow set up and account (I think, don't even know if I did it right) and looked at this forlorn little account sitting there with nothing in it.

"How will I ever have what other people accounts look like, with pictures and words, and all that other stuff?"

To me, setting up most stuff on the interweb isn't worth 1/10th of the effort.

I forgot about it, didn't even remember my user name, password, whatever. Later on, I got some other emails from people I know, asking me to friend them, or whatever.

I just delete those emails.

If I want to talk to you, I know how to contact you.

I'm not saying this in a disgruntled, angry way. To me, it's the same lack of desire I have to go stand around in a crowd of people, most of whom I don't know, knowing I could have been doing something else less boring.

A2k seems to fulfill my need for random communication.

I posted this picture on another thread. One about Post Secret.
It pretty much says it all.... 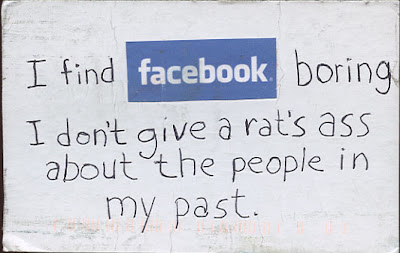 I found my grand nephew on Facebook. Learned that he had two little girls, my great-grand nieces. We re-connected through his association with the daughter of some dear friends of mine. I just happen to see his name on one of her posts.

I've had a few delightfully flukey reconnects this way. I enjoy looking at pictures and sharing with people I'd often wondered about but simply lost contact with throughout the years. Just reconnected with another old classmate, a fellow girl scout from 1966. We were in the same troop and sold cookies together. There's a group of us from Junior High School and we're starting to kick around the idea of a reunion because we're having such a blast on Facebook. It's not everyone's cup of tea I suppose but I'm digging it a lot.
1 Reply
1
Reply Sat 18 Sep, 2010 09:39 am
@blueveinedthrobber,
chai could you make yourself clear please?

i gotta check my page now just because!

I'm so glad I got rid of it. I was getting a lot of requests and invitations to things, which I never did (the youville and farmville kind of stuff) and really, I had my privacy settings really high, but I had to filter out all the noise from everybody and their dog - I don't need to be updated like that.

i gotta check my page now just because!

You must first admit that you have a problem Shewolf.


Everybody, I don't think she's serious.

Where would we be with our doses of Mame and chai?

0 Replies
2
Reply Sat 18 Sep, 2010 01:38 pm
I like FB (for the most part).
I now have frequent (and agreeable) contact with extended family members and old friends that I formerly saw less than once a year. We share pictures of our families and our lives. I hear what concerns them, what inspires them. I offer (and receive) compliments, support and advice. I see their little bursts of wisdom and witticism that I would previously have not known about.
This year my extended family had a wonderful 'clan reunion' that I'm sure WOULD NOT HAVE HAPPENED were it not for FB!
I can honestly say I am CLOSER to many friends and extended family thanks to FB.
That said, it makes me angry that I have to 'opt out' of the multiple functions and/or aps that allow outside individuals and orgs. to know my personal information!
If FB is not for you, I respect that. For me, on balance, it is a very good thing.