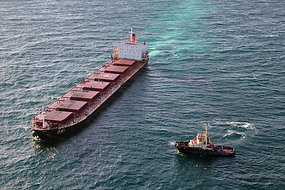 Salvage authorities are holding talks this weekend to find the best way to remove the remaining fuel oil from the damaged Chinese coal carrier Shen Neng 1.

The ship ran aground on Douglas Shoal on the Great Barrier Reef, east of Rockhampton off Central Queensland, at Easter.

The ship was moved and is now anchored off Gladstone after attempts to bring it into port failed on Thursday due to bad weather.

Authorities say all options will be considered when dealing with the Shen Neng 1.

Maritime Safety Queensland (MSQ) spokesman Patrick Quirk says the ship has very little reserve buoyancy as it is sitting about two metres below where it should in the water.

He says if it cannot be salvaged, it could be sunk at sea as a last resort, similar to the fate of a BHP bulk carrier that ran aground off Tasmania in 1995.

"Anyone in shipping would recognise that is a definite possibility although I emphasis we are not examining that option in any detail as yet," he said.

"There is precedent both in Australia and overseas for that option - it's certainly on the table [but] we certainly haven't reached that position in any way yet."

But conservationists say they hope the Shen Neng 1 can be repaired rather than sunk at sea.

The Australian Marine Conservation Society (AMCS) says there could be serious environmental consequences if the Shen Neng 1 has to be scuttled.

AMCS spokesman Darren Kindleysides says it highlights the gravity of the situation.

"Now clearly government must take a step back and look at the risks to the World Heritage Great Barrier Reef of shipping and make some really tough decisions in terms of how best to protect that really important environment from ships.

"Where boats have been sunk, it's for reasons of creating a tourist destination or creating an artificial reef for fish - this clearly isn't the case here.

"This would be unplanned and to some extent it would be viewing the sea really as a dumping site."