Forums: Movies, Rocky Horror Picture Show, Meatloaf, Susan Sarandon, Barry Bostwick
Email this Topic • Print this Page
Reply Thu 4 Mar, 2010 07:46 pm
Getting drags (willingly mind you) to see this tomorrow. I have been told that my 27 years of life have been worthless because I have not seen or experienced this before.

After that, fell in love with it.

On top of everything else, it's a great source of costume ideas.

I'm thinking you're soooooo young, that you won't even recognize some of the people who were in Rocky Horror before they really had careers.
1 Reply
1
Reply Thu 4 Mar, 2010 08:02 pm
@ehBeth,
awe i'm not that young! I mean I had heard of it! I know of the Time Warp, just never seen it!
0 Replies
1
Reply Thu 4 Mar, 2010 08:10 pm
@Seed,
I like to think I'm an open minded individual but I really don't have any interest in going to one of these midnight screenings. You are a braver soul then I am.


It was a cult here every Friday night at a particualr cinema for years and years.

People would come along in costume and everyone would sing.
0 Replies
1
Reply Thu 4 Mar, 2010 10:23 pm
Well, how funny is this! I have been putting bags of props together tonight. SonofEva has ten friends coming over tomorrow night for a birthday celebration, and he insists he wants them to see "Rocky Horror Picture Show." I can't wait to see all those 16 year old boys doing the Time Warp! At my house!! Tomorrow night!!!

I had a housemate at the time I first saw the film who looked just like Janet....I mean Susan. It was startling.

Apparently our household at the time was startling! There were three women, including me, who had enormous and intensely blue eyes. One of the men also did. I also had a Siamese ditto.

Apparently the effect if we were all together was odd, to say the least, for visitors. 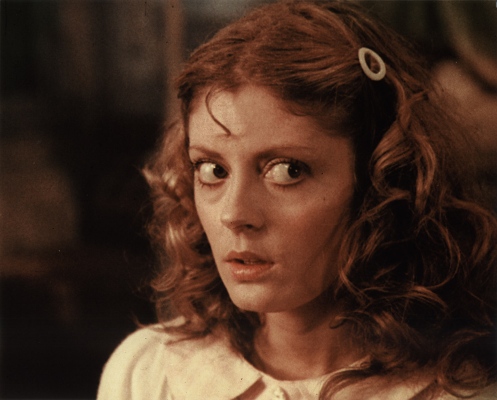 
How memory does fade! Otherwise, almost perfect resemblance to housemate!
0 Replies
1
Reply Fri 5 Mar, 2010 05:57 am
Rocky Horror Picture Show must be one of the most successful motion pictures of all time, at least in terms of longevity. There are theaters in the United States where it is shown every Saturday night, to this day.
1 Reply
2
Reply Fri 5 Mar, 2010 07:25 am
@Setanta,
In the '80s, it was, to a number of my dates, a seemingly clever way to have a first date with me. I don't mind the film but I do find the succession of first dates there to have been odd.

In college, except for the hair, I looked more like Columbia. Now I actually do look a bit more like Janet but not the eyes.
0 Replies
2
Reply Fri 5 Mar, 2010 07:47 am
Midnight showings at the Exeter St Theatre in Boston.
A toast!
0 Replies
1
Reply Fri 5 Mar, 2010 07:53 am
I am somewhat baffled as to the appeal of this film and the goofiness it inspires in straight people. I first saw it in 1979 while still in high school. It was playing at a little theatre in the West Village. It was fun and all the local (real) transvestites would be lined up for the midnight show. It was not by any means the best tranny show in town, and I think they soon gave over the stage to the straight college guys who were being dared by their friends to get up in drag and walk around the village (a hazing tradition at NYU). The real trannies went back to the 10th Ave. meat district to perform. The masses continued to show up at the midnight show for years, maybe it still goes on - I don't know. I've seen it at least three times now and each time thought to myself "what is it with this flick?" I last saw it with my nieces (who thought it was hysterical that the film was such a relic that I saw it first when I was their age) and I again I watched a bunch of straight college students go through the scripted motions (they've pretty much stayed the same for 30 years) and thought again "what is it with this flick?. So Seed, I hope you have a wonderful a time, if not, you can take comfort in the idea that you are not alone in the feeling of "meh".
0 Replies
1
Reply Fri 5 Mar, 2010 08:45 am
I had some Parisian friends who were absolutely mad for cinema. I made the mistake of taking them to see a typical "assisted" performance of Rocky Horror Picture Show at one of those local theaters which shows it every weekend. At one point, i actually, physically held Ambroise down so he couldn't get up and dance in the aisles--he had begun to remove his clothing. (He would do that on the least pretext.) Fortunately, his girlfriend understood that the audience partition was ritualized, and got into throwing toast, spraying water on the crowd (i made them take umbrellas)--and she just fell out laughing at the people at the front miming the dialogue.
0 Replies
1
Reply Fri 5 Mar, 2010 09:05 am
My favorite part of the Time Warp is Little Nell's tap dancing.

Alice in Wonderland in 3D then off for dinner and then a midnight showing of Rocky Horror Picture Show.