Forums: Culture, Parenting And Childcare, Education, Sociology, Hugs
Email this Topic • Print this Page
Reply Thu 28 May, 2009 07:01 am
I've noticed this at my kid's school, I had no idea it was much bigger than that: 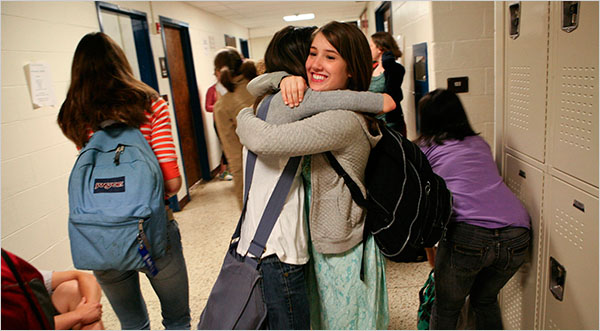 Girls embracing girls, girls embracing boys, boys embracing each other " the hug has become the favorite social greeting when teenagers meet or part these days. Teachers joke about “one hour” and “six hour” hugs, saying that students hug one another all day as if they were separated for the entire summer.

When my kid went back to school after being out for a while, she faced a veritable hug gauntlet -- every single kid in class wanted to hug her, girls and boys. Some were satisfied with a group hug (4-5 at a time), while others patiently waited their turn for a solo hug.

Whenever she runs into someone she knows, there's a quick hug and then they start talking.

Whenever she says goodbye to someone she knows, there's a hug.

Hugging, hugging, hugging. And as the article says, boys are hugging each other too. (I'm talking about the elementary school set -- my daughter's going in to 3rd grade next year -- but I see it across all ages.)

I wasn't brought up hugging around my parents - fairly standoffish - boarding school and all that - but at school we used to hug a bit - but then we all slept in each others bed and had a real sisterhood thing - family all of the same age that kinda stuck together.

As I grew up (into my 20's) - hugging just was natural. I'll hug anyone and everyone - if they accept hugs. We all walk into work - and hug one another - maybe seem unprofessional - but it works for all of us.

What I love to see now is my sons - they both hug their friends. There is no nonsense of who should and shouldn't. I went to the little fellas school the other day - all the kids were hugging - not forced.... he's 12 - being hugged by sixth formers and junior school kids - boys and girls. It's lovely.

My eldest - had to be "taught" to hug- he's touch sensitive - so this was major. He's 16 and hugs all his friends - boys and girls - they are all a very touchy-feely generation - from what I can see. BigBoy is still touch sensitive - but has learned how to deal with it when he's in his comfort zone.

Then again - for those who aren't tactile - can be a real nuisance for them. Prolly winds a lot of people up too coz some think it's put on. It's not tho.

What's also really nice is seeing little fella and his best mate snuggled up on the sofa together - watching a DVD - giggling, laughing - just like kids / adults ought to.

My best friend and I will still sleep in the same bed and can hold hands and sit really close - it's comfortable. Don't even think about it. Love a hug - closeness - holding hands.

We also tell each other we love one another - and our friends. As kids, we were never told that. Before my kids put down the phone, or say goodbye, they also say i love you. I like that too. Other's dislike it or feel real uncomfortable. But that's just the way we are.

Some schools are banning it, some kids find it oppressive. I like it from what I've seen of it. What do you think?


I think people are thinking waaayyy too much about this.
I was a huggy kid in school too. I remember alot of my friends hugging, holding hands, and just loving to be around each other and touch each other.

I dont understand why this is a concern for schools or even parents. Micro managing? maybe?

Seriously.
i would hope that my child is able to develop relationships strong enough to include hugging, wrapping her arms around her friends and not feel like she has to be stand-offish thanks to PC rules.

0 Replies
1
Reply Thu 28 May, 2009 08:29 am
@sozobe,
It probably means American school kids are finally catching the bug from us OldEuropean evildoer school kids. We've done that wen we went to high school in the 80s, though probably not in elementary school.

I distinctly remember some of us getting in trouble for it on a school trip to Skokie near Chicago. To be fair, I should add that in honor of the Blues Brothers, they were wearing hats and coats like Jake and Elwood throughout the trip. One day, after shopping for souvenirs at Macy's, they a group of maybe five of them hugged each other good bye one by one, as they would have in Germany. Suddenly, several security guys busted into the hugging activity and threw them out of the store. They thought my friends were mobsters.
0 Replies
1
Reply Thu 28 May, 2009 08:51 am
So you You're-a-peein's ain't just commies . . . you're gay commies into the bargain, eh?
0 Replies
1
Reply Thu 28 May, 2009 09:25 am
I read about it this morning too, and it definitely is true in my daughter's
school (middle school now). It wasn't so prevalent in elementary school
but now - mama mia, I wait 5 min in the car just for her to finish hugging her
friends after school. Then again, my daughter always has been big on hugs.
0 Replies
1
Reply Thu 28 May, 2009 09:35 am
The next thing ya know, nobody will hate anybody else, and then where will we be ? ! ? ! ?
1 Reply
1
Reply Thu 28 May, 2009 09:37 am
@Setanta,
Hugging makes it possible to pat down your huggee. That way you can check for a piece with a manly hug.


You can blame it on the SOPRANOS.
0 Replies
1
Reply Thu 28 May, 2009 10:12 am
It's not just kids, it extends well up into the 20's, maybe into the 30's. I see a lot of them, and it's all types, the art school people, the musicians, the jocks, the various ethnicities, the guys with the elaborate handshakes, which ends in a very formal hug.Maybe not the guys in the business suits , Blackberries, and attache cases yet, but even them when they're off duty. Face it, if we're over forty we're well behind the curve on this one.
1 Reply
2
Reply Thu 28 May, 2009 10:13 am
@MontereyJack,
Quote:

Face it, if we're over forty we're well behind the curve on this one.

As a child, some adult women had a habit of hugging me to the point of annoyance. Perhaps, it had to do with their Jewish culture?

Anyway, hugging is disgusting to me, since I believe it rewards the phonies in society to be considered caring. Before hugging became so omnipresent, I thought, a decade or so ago, I only saw it with WASPY types towards each other? Was this an effort to change their image of having ice water in their veins?
3 Replies
1
Reply Thu 28 May, 2009 10:59 am
@Foofie,
Microorganisms are far more likely to be passed by hand than by any other means other than a sneeze directly in your face. Doorknobs are the most common vector for such transmission.
1 Reply
1
Reply Thu 28 May, 2009 11:07 am
@Foofie,
Foofie wrote:

hugging is disgusting to me, since I believe it rewards the phonies in society to be considered caring.

each to their own.

hugging someone isn't, in my opinion, about being rewarded - it's the opposite - it's about giving. Hey ho.


<gently hugs a pillow-fluffer whilst running out the door!>

Microorganisms are far more likely to be passed by hand than by any other means other than a sneeze directly in your face. Doorknobs are the most common vector for such transmission.


Yes, I have heard of such on tv/radio. However, my immune system scrambles antibodies that are on constant alert status. My body has its own FEW (Foofie Early Warning) Line. I literally hear a klaxon in my ears and the roar of alert antibodies taking off.
0 Replies

Why Chinese Mothers are Superior - Question by Linkat
Beached As Bro - Discussion by dadpad
Is culture really all about terror management? - Question by FBM
I need to interview someone of a different culture - Question by Stephy2012
What types of things are Hispanic women/Latinas into? - Question by JGoldman10
Do Plants Have Feelings Too, And If So, Should We Eat Them? - Question by mark noble
Songs That Define a Generation...Or the World - Discussion by Bella Dea
Movies about the conflicts bewteen America culture & other cultures - Discussion by Melodyzhong
Indoctrination not taking place? - Discussion by Baldimo
Where are our manners? 8 easy steps to get them back - Discussion by Robert Gentel
Copyright © 2022 MadLab, LLC :: Terms of Service :: Privacy Policy :: Page generated in 0.03 seconds on 05/19/2022 at 08:38:45
▲ ▼