Forums: Science, Flu, Medicine, Pandemic, Pandemic Flu
Email this Topic • Print this Page
1
Reply Sat 25 Apr, 2009 02:49 pm
@roger,
I'm mixed on my feelings, and don't know enough for actual opinions - I fear panic about something that turns out to be non pandemic almost as much (re its potential effects) as a pandemic... but, of course, not really.

As a side feature, I'm interested in the cytokine stuff - the '93 clip was all news to me. Back in my lab days, we had been working with lymphokines and macrophages and had gotten some 'never before' results which we didn't believe and tested again and again and they turned out to be true, last I knew, re the matter of specificity, which had then surmised ramifications. I've tried to look all that up since and only gotten as far as that our papers were referenced a lot. But I'm not privy to access to serious medical sites at this point - not to mention they'd be 'over my head' now. Eh, and I don't want to bother my now much older boss, the smarty, just as much older as I am, but he had more years to start with. On the other hand, if he's still kicking, maybe he'll write a book about it.
0 Replies
1
Reply Sat 25 Apr, 2009 05:48 pm
@roger,
NYT says it's a mix of swine and bird and suchlike.

It also says it's killing more of the young and healthy.

Sounds like it COULD be a damn nasty one...though, from memory, the NYT says there's been outbreaks of it in the US as well, and it's behaving more like seasonal flu in whom it affects.

I work in a hospital, and they tend to keep us reasonably posted...so I guess I'll know what the medical community is thinking if they get us all re-tested for our special masks...though they'd likely wait until Oz gets its first cases?

It also says it's killing more of the young and healthy.

PANDEMIC, what a wonderful word for media hype, ratings and hysteria.

4 out of 5 doctors could really milk something like this


U.S. officials say the public health emergency is a precaution. Americans are told to prepare for outbreaks but not to panic.

By Jim Tankersley
11:06 AM PDT, April 26, 2009
Reporting from Washington -- Federal officials today declared a public health emergency involving human swine flu, warning Americans to prepare for widespread outbreaks now or in the future, yet urging them not to panic.

In a briefing at the White House, the acting head of the Centers for Disease Control, Dr. Richard Besser, confirmed a 20th case of the flu, this one in Ohio. He said the government will likely find more cases -- and cases that are more severe than the relatively mild ones seen in the United States so far -- as it ramps up detection efforts.

Meanwhile, Nova Scotia's chief public health officer said today that the east coast Canadian province has four confirmed cases of swine flu. And in Mexico, the country's health minister said the disease had killed up to 86 people and likely sickened more than 1,400 since April 13.

U.S. Homeland Security Secretary Janet Napolitano said the government would release a quarter of its 50-million-unit strategic reserve of antiviral medications, which combat the disease in infected patients, to states where outbreaks have occurred. Besser said the CDC has begun laying the groundwork to manufacture a swine flu vaccine if one becomes necessary.

The officials cast the moves as aggressive but precautionary, and they counseled calm.


Swine flu is "serious enough to be a great concern to this White House and to this government," White House Press Secretary Robert Gibbs said on NBC'S "Meet the Press," adding that President Obama is receiving frequent updates on the situation.

"We are taking the proper precautions to address anything that happens," Gibbs said. "It's not a time to panic."

Napolitano said the "emergency" declaration was a routine move to ensure the government is prepared "in an environment where we really don't know, ultimately, what the size or seriousness of this outbreak is going to be."

A swine flu outbreak in Mexico is being blamed for at least 1,000 infections and 81 deaths. There have been 20 reported cases in the United States, none fatal. That includes cases in California, Kansas, Texas, Ohio and New York, where officials confirmed infections today in eight students of a private high school in Queens.

The U.S. patients have ranged in age from 9 to 50. All are recovering or have recovered.

Only one U.S. patient has been hospitalized so far, Besser said. But given the experience in Mexico, he said he expected "that, over time, we are going to see more severe disease in this country."

"This is moving fast," Besser added later, "but I want you to understand that we view this more as a marathon."

The symptoms of swine flu are nearly identical to the symptoms of other influenza, including high fever, aches, coughing and congestion. It appears to spread through human-to-human contact and human contact with live pigs but not by eating pork products, officials said.

Countries around the world moved quickly to limit the disease's spread today. Some issued travel warnings for the United States or Mexico. Others began screening some incoming international air travelers for signs of high fever.

Besser and other officials at the press conference stressed simple steps that the U.S. public can take to limit spread of the disease: Wash hands frequently, stay home, and don't board airplanes, if you feel sick, and keep sick children out of school.

Gibbs said it was too early to speculate about economic effects of an outbreak. And he dismissed reporters who asked if the federal response was hampered by the fact that the Senate had not yet confirmed President Obama's nominee to lead the Health and Human Services department, Gov. Kathleen Sebelius of Kansas.

"It's all hands on deck and we're doing fine," Gibbs said. "I would say that we hope we have a new secretary shortly."


0 Replies
1
Reply Sun 26 Apr, 2009 12:41 pm
0 Replies
1
Reply Sun 26 Apr, 2009 05:39 pm
I found this article interesting as a background, whether the fellow's question turns out to be correct or not:
Swine Flu Outbreak -- Nature Biting Back at Industrial Animal Production? by D. Kirby at Huffington Post
As an aside, I know there are some problems with traditional hog raising as well.
1 Reply
1
Reply Sun 26 Apr, 2009 06:59 pm
@ossobuco,
This photo breaks my heart..
not that tourists are all that big a part of Mexico City life, but they're some part economically, and I've liked every minute of my own time there visiting friends.
Man, I hope this wave of disease is somehow self limiting and stops soon. 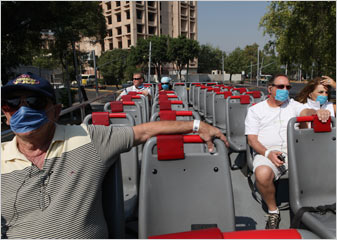 Adriana Zehbrauskas for The New York Times
caption - Tourists on an almost empty tour bus in Mexico City on Sunday. Swine flu has killed more than 80 people in Mexico.

0 Replies
1
Reply Mon 27 Apr, 2009 07:22 am
Why are there more deaths reported in Mexico as opposed to other areas? Is it just because more people in Mexico have become ill? Is the ratio of sick to dead the same, or is the virus less dangerous as it spreads away from its source?

What's the reported mortality rate on this flu? Is it exceptional, or is it just another nasty flu?

1 Reply
1
Reply Mon 27 Apr, 2009 07:37 am
@rosborne979,
In the UK thismorning the report said that "someone" (can't remember who - a virologist) believed the virus in the NY school could already be a mutation from the H1N1 in Mexico, which is why the symptoms are very mild...

I didn't quite hear all the info

The UK has got measures in place for antivirals etc and the alert has been upgraded for possible cases here - but I don't think it's been media hyped as much over here.... then again... I'm not much up on the news or TV - just happened to semi-hear the interview thismorning.
2 Replies
1
Reply Mon 27 Apr, 2009 07:41 am
@Izzie,
That would make sense, if the Kirby article question is true re the source and further-away cases.
0 Replies
1
Reply Mon 27 Apr, 2009 03:32 pm
@Izzie,
Our pandemic flu plan is up and running.

Interestingly, we are still being advised to have this season's seasonal flu shots, on the basis that there's a tiny bit of swine flu in the mix, that may confer a wee bit of assistance when fighting the new strain.
1 Reply
1
Reply Mon 27 Apr, 2009 03:48 pm
@dlowan,
over here we are given flu shots (government agencies - teachers, NHS, elderly and immunocompromised/high risk folk) - do you have the same process over there?

But I'm an injection phobe!!!

Also, I haven't got "normal" flu for about 7 years, without a shot.

And there ain't no shot for pandemic flu.
1 Reply
1
Reply Mon 27 Apr, 2009 03:55 pm
@dlowan,
The advice here is neither 'pro' nor 'contra' the normal flu shots (everyone can get it free here).
However, health authorities underline that it's not against the 'swine flue' but only could strengthen the immune system, additionally.
1 Reply