Forums: Science, Fossils, Pre-Historic Animals
Email this Topic • Print this Page
Reply Wed 22 Apr, 2009 05:43 pm
looks like a smaller ancestor of T Rex has been found in china .
(china isn't just a supplier to walmart , they also produce plenty of bones of prehistoric animals - the western nations might as well close shop : china supplies everything from soup to nuts and now also dinosaur bones in asssorted sizes) 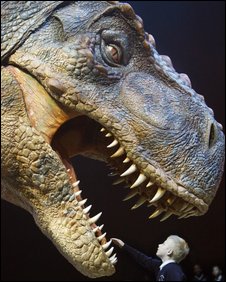 Tyrannosaurus rex may have had much smaller ancestors

Fossils found in China may give clues to the evolution of Tyrannosaurus rex.

Uncovered near the city of Jiayuguan, the fossil finds come from a novel tyrannosaur dubbed Xiongguanlong baimoensis.

The fossils date from the middle of the Cretaceous period, and may be a "missing link", tying the familiar big T rex to its much smaller ancestors.

The fossils show early signs of the features that became pronounced with later tyrannosaurs.
..........
The fossil has some hallmarks of large tyrannosaurs such as a boxy skull, reinforced temple bones to support large jaw muscles, modified front nipping teeth and a stronger spine to support a large head.

But it also shows features absent from older tyrannosaurs, such as a long thin snout.

Tyrannosaurus rex may have had much smaller ancestors