Welsh Mayor Lifts Ban On Film She Starred In 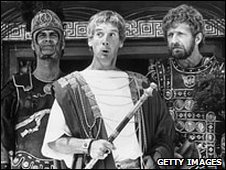 Two Monty Python stars will be at the first screening of their classic film Life of Brian in a town where it has not been seen since a ban 30 years ago.
Terry Jones and Michael Palin will join Aberystwyth mayor Sue Jones-Davies - who also starred in the 1979 film - at a charity showing on 28 March.
Long before becoming mayor, she played Brian's girlfriend in the movie.
But she pledged to fight for the film to be shown when she found it had not been seen in the mid Wales town since.
In 1979, opponents claimed Life of Brian made fun of Jesus, and they accused the Python team of blasphemy with its story about a Jewish man who was mistaken for the messiah and then crucified. 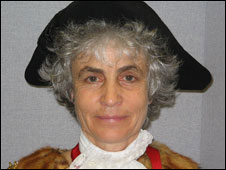 Some religious groups picketed cinemas which screened the film.
Last July, Ms Jones-Davies said she was amazed a town like hers still barred a movie now regarded as a comedy classic.
It is understood some churchgoers in the seaside resort are still against the film being shown.
But Ms Jones-Davies said she had been assured there was nothing standing in the way of showing Life of Brian in Aberystwyth in 2009.
"I talked to officials at the town council to check if it was appropriate to show the film and we thought, why not, the proceeds are going to charity," she said.
"I then asked Terry if he would like to come to the screening and he said, 'shall I ask Michael?'. I said yes and then Michael agreed."
Iconic lines
Ms Jones-Davies was not certain the Python stars had heard about her campaign to lift the ban on their film.
"They've been banned from so many places I'm not sure they'd heard about what was happening in Aberystwyth," she added.
Proceeds from March's screening will go to charities nominated by Terry Jones and Ms Jones-Davies.
The two Pythons and the mayor will also hold a question and answer session with fans following a champagne reception and the film.

Tickets costing £25 are on sale now, but organisers said only 120 were available.
They added it was "a rare opportunity to get to talk to the stars from the film in an intimate setting".
Ms Jones-Davies' chosen charity is Calon Ceredgion Nurse Appeal, which is part of British Heart Foundation Cymru.
Terry Jones has chosen Truthout, a news agency dedicated to establishing a "powerful, stable voice" for independent journalism.
Life of Brian has maintained its popularity. It is usually at or near the top of lists of the greatest comedy films.
It featured some iconic lines, most famously the verdict by Brian's mother on her son: "He's not the messiah - he's a very naughty boy".
Ms Jones-Davies played a revolutionary called Judith Iscariot, including a nude scene with the film's hero, Brian, played by the late Graham Chapman.
It is understood a committee made up of church leaders in Aberystwyth recommended a ban in 1979.