Forums: Sports, Fitness, Hiking, North America, Exercise
Email this Topic • Print this Page
Reply Fri 6 Mar, 2009 10:39 pm
After months of vigorous exercise, I'm tired of the gym. I'm tired of running ever faster on the treadmill without ever getting anywhere, tired of stale air, tired of air conditioning blowing into my face. It's time for walking outside, through a landscape, for seeing real things, and for fresh air.

I hereby declare the 2009 hiking season to be open!

And since I'm still pretty new here, I'll abuse this thread to shamelessly solicit your places to go, any warnings to keep in mind, your favorite trails to seek out. Feel free to hang out and share your stories.


We thought it especially beautiful...and you might not be able to hike, but you ought to be able to get a good walk in: 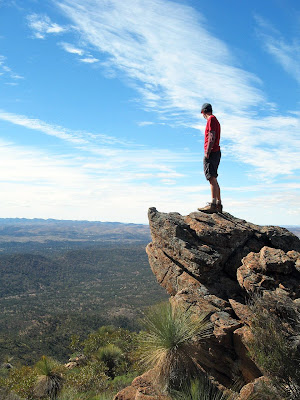 0 Replies
1
Reply Fri 6 Mar, 2009 11:01 pm
@Thomas,
I'll start with my first hike this year. It's nothing spectacular -- A few hundred yards behind my house runs an abandoned railway track. Yesterday, when the weather was nice and the ground was still frozen, I decided to check it out.

One thing about railway tracks: They're straight. Very straight. For five miles in a row, most of the trail endlessly looks like this:

Sorry to say, path itself was basically boring. I was lucky when the monotony was occasionally interrupted by something people dumped on the track, such as this tire:

But while the way itself wasn't too entertaining, I did see some nice things along the way. Here, for example, is what looks like a friend of Penny the Hamster ...

As I said, nothing spectacular. Now you know why I'm trying to tap into your knowledge on hiking trails in the North Atlantic region.

Beautiful part of the country that nobody would associate with Jersey - but there ya go - within an hour (or maybe an hour and a half) of Edison, Metuchen, New Brunswick.

You can swim, raft, build fires along the river (or at least you used to be able to- we did)
Do rock walks (you can hike this brook walking on rocks and never touch the water).
It's a magical place - especially in spring when the trees are budding and leafing out and in fall when the foliage is spectacular.

A River and its Valley

For 40 miles the Middle Delaware River passes between low forested mountains with barely a house in sight. Then the river cuts through the mountain ridge to form the famed "Water Gap." Exiting the park, the river will run 200 miles more to Delaware Bay and the Atlantic Ocean at Wilmington, Delaware.

Get to know the river
Swim; fish and boat; canoe, kayak, raft and tube. The Middle Delaware (left) is one of the cleanest rivers around; the Delaware watershed provides water for 10% of the nation's population


Hike the Endless Mountain
You are in the footsteps of two centuries of hikers as you climb the gateposts of the gap, Mt. Minsi PA and Mt. Tammany NJ (left and above) and emerge atop the "endless mountain" " Kittatinny Ridge. You can hike 27 miles of the Appalachian Trail within the park.


Watch the Watershed at Work

The Water Gap is a geological testament to the power of flowing water.
On the Pennsylvania side, streams tumble off the Pocono plateau and rush through dark hemlock groves to the river. Watch the watershed in action at Dingmans Falls (left)Raymondskill, or Childs Park. Also, the Appalachian Trail website mentions "a very active black bear population" along the New Jersey stretch of the trail. What does one do about a population of very active black bears? Does one throw them a Frisbee? Does one give them leftover "change" stickers from the Obama campaign so they can live out their activism? Does one run away? What?
1 Reply
1
Reply Fri 6 Mar, 2009 11:25 pm
@Thomas,

well, black bears, huh? When I hike alone I always carry a big stick. Honestly. My dad has a cabin in upstate New York and I was there for about three weeks last summer with my daughter and my dog - on nineteen acres of wilderness with bears, mountain lions, snakes, etc. My brother, a big outdoorsman, had built this blind in a tree out behind the cabin, so in the evening we'd sit up there and watch the wildlife file past below us. It was pretty amazing, but I was always a little afraid to get down believing those animals hadn't smelled us and weren't hanging around waiting for us to get back on level ground.
Thankfully, they never were.
I've never run into an animal up close and personal which is GOOD, because aside from friendly dogs, wild animals scare the crap out of me - even domesticated animals for that matter - I don't know why, but I'm afraid of cows, horses, you name it.

In terms of snow - in the mountainous areas of Jersey like the water gap - I'd venture to say, late March/early April. But it all depends. I was talking to my mom last Sunday - didn't you guys just get some snow? (They live in East Brunswick).

But just wear some good water proof boots and walk it in the snow - it'd be beautiful I bet. (I always went in summer when I could swim or autumn for the foliage).
But yeah, carry a big stick.
1 Reply
1
Reply Sat 7 Mar, 2009 04:51 am
NEVER, ABSOLUTELY NEVER, carry a Snickers bar. There is something that wafts over the air and draws bears like vampire bats to a blood donors meeting.
Del Water gap is OK but really, the Appalachian Trail in most of Pa and NJ is about the least picturesque of the entire span. The close area from the LEHIGH GAP west to HAwk Mountain is a day hike and is a grand view. There are also some day hop sections from HighPoint NJ .
Youll want to go to SPRUCE KNOB West Va when your lungs can take the stress of a climb . Id google up High Point and see whethere there are any good maps. Youre gonna need a decent GPS (not one of those car units, you wont find ma ny pizza joints in the hills).

Even little Delaware has some nice hiking trails along the Delaware Bay in the coastal zone protected areas.
I dont know whether the NJ Pine BArrens has a series of trails but Ill bet they do.

REmember, if your in NY or Pa, NO SNICKERS
1 Reply
1
Reply Sat 7 Mar, 2009 09:41 am
@farmerman,
The AT! You probably don't want to go in your area until at least April, maybe May, to steer (hopefully) clear of snow. The AT is going to require you (they don't require it but you should do it) to take some supplies with you, particularly if you want to go up any mountains.
0 Replies
1
Reply Sat 7 Mar, 2009 11:48 am
@aidan,
Hi Aidan! Yes, we did get a lot of snow earlier this week. But it's almost gone now. Thanks for the advice about the stick! Perhaps I should bring a cat with me, too?

0 Replies
1
Reply Sat 7 Mar, 2009 11:50 am
Okay, Jespah and farmerman -- what kind of food supplies don't attract bears? Back in Germany, when I went hiking in the Alps, I usually carried apples, bananas and sandwiches with either cheese or sausage on them. Is any of this going to attract black bears or other dangerous critters?
1 Reply
1
Reply Sat 7 Mar, 2009 11:58 am
@Thomas,
Bears are particularly fond of sweets. There are bears in the Del Gap and into N Jersey and NY(Then they really get heavy in New ENgland)

I hiked the AT many years ago as a several step hike (took 2 years ) .
Three years ago we did a short section of the new addition that goes into New Brunswick (Canada, not New Jersey). It was rather remote and swampy.

Good boots and lots of socks. Fire kit, basic dry foods and water . You can get on the trail any most time of year but your supplies will vary considerably. We always carried lots of powdered sweet cocoa (Bears like that too but if you wash the stuff out it wont draw em as much as hershey bars or snickers).

In the southern AT, the Spotted skunks are a real nuisance cause they will go oit of their way to spray you, while stripe skunks are more accomodating to humans.

Coyotes are becoming more of a nuisance too. Deer can be a pain during fawning season and in the fall.

Otters are starting to repopulate the areas of Md, Pa, and NJ/NY.

Remember, your GPS is only as good as your crown visibility .
1 Reply
1
Reply Sat 7 Mar, 2009 12:09 pm
@Thomas,
Thomas, if you go up Palisades Parkway you'll get to Bear Mountain State Park - 7 lakes drive there is so beautiful. We used to go there a lot, summer and winter.
Lots of hiking trails and great scenery. Nearby West Point is nice to visit and
my favorite little town - Garrison. There is a cute coffee shop at Garrison's
Landing down at the Hudson.

Garrison! Cousins used to live there. Definitely a gorgeous place. Deer aplenty.
1 Reply
1
Reply Sat 7 Mar, 2009 06:03 pm
@jespah,
Oooooh -- you used to hike in Maine? Are you familiar with Arcadia National Park? And if so, what can you tell me about it? My sister D., who once lived in Boston for half a year as an intern, is a big fan of New England in general, and of Arcadia National Park in particular. She strongly suggested that I pay it a visit.
3 Replies
1
Reply Sat 7 Mar, 2009 06:12 pm
@Thomas,
Used to go to Baxter and hike Katahdin. Also Bald Mtn., I forget where that is.
0 Replies
1
Reply Sat 7 Mar, 2009 07:30 pm
not even close to home but I've hiked almost all of the Uncompaghre plateau of western colorado/eastern utah. 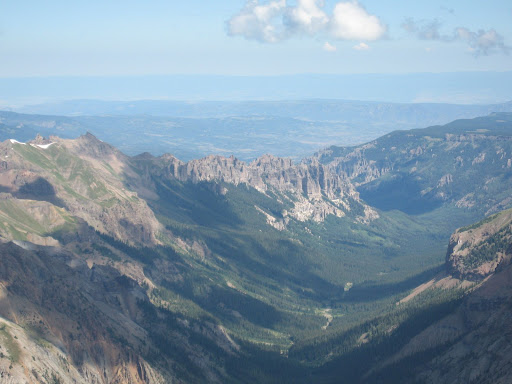 0 Replies
1
Reply Sun 8 Mar, 2009 12:23 am
@Thomas,
I live in Maine most summers and (to me)ACADIA is a tourist trap. The best hiking is off season or winter (even then the Maniacs are crazy for cross sountry and snowshoing). MIKLOS lives in Blue Hill which is just N of Acadia. There are lots of trails in Acadia, (but its a well used park so privacy may not be available when youre there).
We take long walks in the Washington County area , areas like the cross country off rt 9 (Called the "Airline" because its a mountain ridge road). The Airline cross trails are spectacular in the Fall (However the hunters abound and moose get testy. Youd really like the Katahdin trails. Its almost a western experience (except with much more water). There are some really fine ocean side trails near Lubec and Eastport (but its a 15 hr drive from NJ).
The trail system in Pa uses the old RR track lines. These are all low grades and easy walking through country side and town (A new one is being built from Chester County to the Susquehanna River) Its about 25 miles and it goes right through the AMish Country. Im doing the geologic trail map and , while the trail needs some major dressing, its gonna be great even this year.
ANother set of Pa trails is the trail system based upon old Indian Paths. The Pa DNR is making a set of maps of these but (based on budgets and financial instability of the whole state) I dont think these maps have real high priority.