How the turtle got its shell - Evolutionary Puzzle Solved

Scientists believe they have cracked a long-standing mystery of evolution - how the turtle got its shell.

It follows the discovery in south west China last year of the oldest known turtle fossils, believed to date back 220 million years.

The three adult specimens were discovered remarkably intact and with characteristics never before seen in turtles - including teeth and an incomplete upper shell. 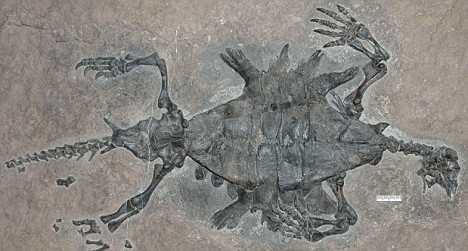 Scientists from Canada, China and the US said the half-shell provided new evidence of how it evolved, Nature magazine has reported.

Dr Xiao-chun Wu, a palaeontologist at the Canadian Museum of Nature in Ottawa, said: 'Since the 1800s, there have been many hypotheses about the origin of the turtle shell.

'Now we have these fossils of the earliest known turtle.

'They support the theory that the shell would have formed from below as extensions of the backbone and ribs, rather than as bony plates from the skin as others have theorised.'