We now have to rethink the fossil record
Dr Mikhail 'Misha' Matz,
University of Texas at Austin

palaeontologists may have to rethink their theories . while past research indicated that only "multi celled" organisms could make "tracks" , single cell , grape-sized organisms have now been found on the seabed and may point research into a new direction .
hbg 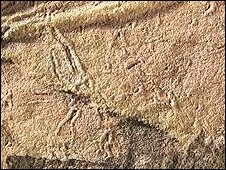 A single-celled ball about the size of a grape may provide an explanation for one of the mysteries of fossil history.

Writing in Current Biology, researchers say the creature leaves tracks on the seabed which mirror fossilised tracks left up to 1.8 billion years ago.

Many palaeontologists believe only multi-celled organisms could have made these tracks.

This has been difficult to confirm as no multi-cellular fossils of such an age have ever been found.

The discovery was made by marine biologists monitoring the sea bed in the Bahamas. They noticed a great deal of tracks made by grape-shaped creatures called protists. Dr Mikhail "Misha" Matz from the University of Texas at Austin, US, led the research.

"We were looking for pretty animals that have eyes, are coloured, or glow in the dark; instead, the most interesting find was the organism that was blind, brainless, and completely covered in mud," he said.

The researchers say the 3cm-wide, single-celled protists propel themselves using tiny protruding legs called pseudopodia. A number of openings all over the body act as mouths and outlets for waste.

The protists move very slowly, taking weeks or even months to make a track of a few centimetres. As the sea bed currents where they were observed are very slight, their tracks are not washed away.

In case you forgot, farmerman, that picture is of Reyn's other brother Zeeke...
0 Replies
1
Reply Tue 25 Nov, 2008 07:26 am
@hamburger,
Wow, those must have been big cells. What is the largest single-cell around today?

Single-Celled Giant Upends Early Evolution
Michael Reilly, Discovery News
A distant relative of microscopic amoebas, the grape-sized Gromia sphaerica was discovered once before, lying motionless at the bottom of the Arabian Sea. But when Mikhail Matz of the University of Texas at Austin and a group of researchers stumbled across a group of G. sphaerica off the coast of the Bahamas, the creatures were leaving trails behind them up to 50 centimeters (20 inches) long in the mud.

The trouble is, single-celled critters aren't supposed to be able to leave trails. The oldest fossils of animal trails, called 'trace fossils', date to around 580 million years ago, and paleontologists always figured they must have been made by multicellular animals with complex, symmetrical bodies.

But G. sphaerica's traces are the spitting image of the old, Precambrian fossils; two small ridges line the outside of the trail, and one thin bump runs down the middle.

At up to three centimeters (1.2 inches) in diameter, they're also enormous compared to most of their microscopic cousins.

In the lower Silurian marine transgression sequences are some rather large fossils called "Scolithus" These had always been listed as a trace or "ichnofossil", meaning it was interpreted to be a worm casting or tunnel dug by the SColithus (Sp?) organism (probably a wporm).

In recent years old Scolithus has also undergone a re-evaluation ever since some fossil collector found what looked like a "Wall material" along the edges of the fossil tubes. Was this a large single animal of the single cell variety?