Terkel had been in ill health for some time, suffering from various ailments; a close friend, Tony Judge, said his condition worsened precipitously Oct. 30, and he died just before 3 p.m. on Oct. 31.

For nearly half a century, Terkel crisscrossed the country interviewing people from all walks of life about war, their jobs and a variety of other subjects. His conversations with the prominent and the uncelebrated became books that chronicled much of the history of the 20th century.

Terkel often said that America suffers from what he described as a sort of national Alzheimer's disease. So he wrote books such as Working, Hard Times and his Pulitzer Prize winner, The Good War " oral histories of labor, the Great Depression and World War II, respectively " to help jog the nation's memory.

Born on May 16, 1912, in New York, Terkel's given name was Louis. But like "Scarface" Al Capone, he moved to Chicago and he picked up a tough-guy nickname " which he borrowed from the lead character in James Farrell's 1930s Studs Lonigan trilogy.

"He sounded like he was packing heat," Keillor said. "But he was a lefty, and that's an unsual combination. So that's what first fascinated me about him."

Early in his career, Terkel was an actor, and he actually played gangsters on radio shows before he became a disc jockey. He moved from radio to television, but he was blacklisted during the McCarthy era because his beliefs in workers' rights, rent control and Social Security were labeled "socialist."

His improvised ABC-TV sitcom, Studs' Place " a precursor of sorts to Cheers, set in a greasy spoon rather than in a bar " was canceled in the early '50s.

But in the wake of that setback, he landed a job that would launch him on the path he followed for most of the rest of his life " and he was known to say, jokingly, "Long live the blacklist!"

History From The Bottom Up

After hearing Woody Guthrie on Chicago's fine-arts radio station, WFMT, Terkel phoned the station and asked for a job. And for the next 45 years, Terkel would broadcast on WFMT, interviewing playwrights, authors, architects and singers and traveling to events like the historic 1963 civil rights march on Washington, D.C. And as with his later books, his radio program often offered history from the bottom up.

Terkel loved to talk, and he had a legendary memory, but one of his greatest talents was his ability to listen. Because he listened like a musician, his interviews were often jazzlike: With no written questions, he'd pick up on a riff and improvise.

Terkel's first book, published when he was 45 years old, was The Giants of Jazz, a celebration of the music of Duke Ellington, Bix Beiderbecke and others.

"In the early days, he was mainly a jazz fan, and then it was blues and world music," said musician Pete Seeger, Terkel's longtime friend. "He simply knew people, and was fascinated [by] their music and how their music expressed their hopes

Here's an NYT link with further info, and a photo I like. 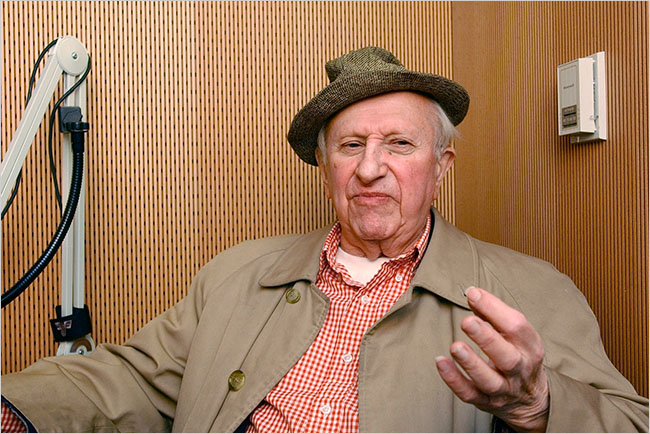 1 Reply
1
Reply Fri 31 Oct, 2008 06:08 pm
@ossobuco,
That reminds me of a snippit -
once a friend from southern california visited me in northern california; he is a major talker, which is generally tolerable because he's so knowledgeable. My business partner and myself and he were walking down the sidewalk to the coffee place and she managed to get a word in edgewise with a few sentences of comment. She isn't shy and is rarely found at a conversational loss. He didn't appear to hear her and kept on with the monologue.
Asked me later about what she'd said and for further information.
So... he had heard.. could talk and listen at the same time, just couldn't halt for the listening. Something like.. no brakes.

I recall reading Working some 30 years ago. In 1997 he went to the White House to receive the National Humanities Medal and the National Medal of Arts with a group including Jason Robards, Angela Lansbury, conductor James Levine, Chicago religion scholar Martin Marty and Chicago arts patron Richard Franke. He was stopped at the White House gate and asked for identification. Studs, who had never driven a car, did not have a driver's license. The only thing he could come up with to appease the White House guards was his CTA seniors pass. They let him in.

Chicago Tribune
0 Replies
1
Reply Sat 1 Nov, 2008 08:59 am
A great man, and a committed left-winger to the very end. We will miss you, Studs.
0 Replies
1
Reply Sat 1 Nov, 2008 09:10 am
@edgarblythe,
My memories of Studs began when we met in Chicago during the 1970s when we were creating the Coalition of Labor Union Women. Studs is/was the most facinating conversationalist I've ever met. Studs loved people and he could tell stories non-stop for days, months, years. Stud was intensely interested in our project and attended several sessions and joined us on lunch breaks to keep up with our progress. He also had lots of suggestions, solicited or not. I treasured our corresponded for several years. Dreaded his old age taking him from us.

1 Reply
1
Reply Sat 1 Nov, 2008 01:18 pm
@ehBeth,
yes , "working" is a great book !
i remember telling my dentist about one of the stories : the dentist who didn't want to part with the set of choppers he had made for a client - the dentist considered them a "piece of art" .
our dentist had just started out to practice and was quite concerned about attracting new customers . i told him to consider himself an "artist" .
he was quite thankful for being called an artist - and has kept my teeth in good repair .
so i'm giving thanks to "studs" !
hbg
0 Replies
1
Reply Sat 1 Nov, 2008 02:53 pm
@BumbleBeeBoogie,
You're very lucky to have personal memories of such a fine fella, AuntB.
1 Reply
1
Reply Sun 2 Nov, 2008 09:11 am
@ehBeth,
I donated Stud's letters along with other documents of mine to the California Historical Society.

I got to meet Mike Royko, Chicago's Pulitzer Prize-winning columnist thanks to him being one of Stud's good friends. They both were very supportive of our Coalition of Labor Union Women creation efforts. Royko is/was a very funny man and a great writer.