Forums: Science, Animals, Sponges, Sea Sponges, Aquatic
Email this Topic • Print this Page
Reply Fri 24 Oct, 2008 07:09 pm
I admit I had never given this question a lot of though before just recently. I am sitting through 7th grade classes learning what I didn't learn in my own middle school years and then some. I know what mycology, cytology and hystology are. I know what a chloroplast is and what it does.

And I know what defines animals as separate from plants. We watched a video about sea sponges this week. For a long time that bathroom scrubby was assumed to be a plant. Lately it has become apparent that it is actually an animal. It feeds itself rather than relying on photosynthesis, it reproduces via sperm and egg. But that is pretty much where the similarities to us stop.

Sponges are a collection of cells and spicules that make up the corrugated, folding, tubing forms you think of when you think sea sponge. Inside these forms are pockets, channels, chambers and flagellating 'hearts' that pump water through from the outside of the sponge to the inside hollow where the water is released back into the sea/ocean. The water carries micro organisms with it and they are filtered out and absorbed by the sponge as food.

The truly freaky thing about all this is that scientists are finding that these beauties are the oldest living common ancestor to the rest of us higher beings.

Scientists at the University of California, Santa Barbara have discovered significant clues to the evolutionary origins of the nervous system by studying the genome of a sea sponge, a member of a group considered to be among the most ancient of all animals…

the research group made a list of all the genes expressed in a synapse in humans, since synapses epitomize the nervous system. Synapses are involved in cell communication, learning, and memory. Next, the researchers looked to see if any of the synapse genes were present in the sponge.

“That was when the surprise hit,” said Kosik. “We found a lot of genes to make a nervous system present in the sponge.” The research team also found evidence to show that these genes were working together in the sponge. The way two of the proteins interact, and their atomic structure, bear resemblance to the human nervous system. http://grokbrain.com/?p=19 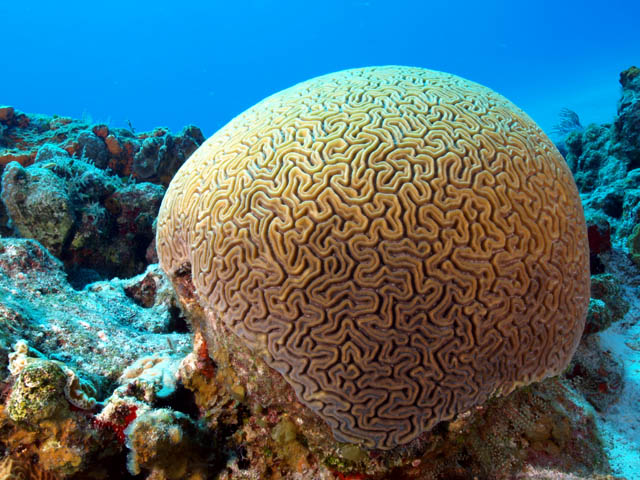 They are considered to be the first multicellular animals ever to have evolved and still be alive. This happened some 3.5 billion years ago (I think, if I'm right, this is astonishing to me as the earth is only somewhere over 4 billion years old I think).
0 Replies
1
Reply Fri 24 Oct, 2008 07:40 pm
@littlek,
Quote:

And this quote gives new meaning to Brain Coral!

Not to be picky, but I don't think Brain Coral is a type of sponge. Although it *is* an animal, not a plant (Corals are community animals, some of which must incorporate algae (plants) to survive).

1 Reply
1
Reply Fri 24 Oct, 2008 08:11 pm
we use sponges and corals as unique and distinct environment indicator fossils . These are of two differing phyla and the names of each (sponges and corals) have changed several times in the last 20 years or so. Sponges were always the PORIFERANS, and Corals were originally named COELENTERATES. The only real difference between the two phyla is that sponges lack mouths and asses and the coral (having a perfectly serviceable ass) also is radially symmetrical. Many sponges are actually confused for corals and (In fossils) that happens to oil field paelontologists all the time.

I once almost flunked a mid-term practical in Paleo because I confused a Rudistid coral with a Receptaculites. (I know, what a rookie). I still wake up nights and scream "DAMN PORIFERANS!!!"

Then I wake up and realize that I dont have class tomorrow.


PS sponges and coral;s have algae as symbionts. Many examples of shared chemical structures exist between plants and animals. Many lichens serve as an evolutionary predecessor of chitin (shells of sea dwelling arthropods, like crabs and lobsters and barnacles).

I know we have to watch for hidden meanings when participating on a forum.

Yes, you were hoping that the inspiration for this was going to appear, right?

Spongebob is a source of irritation to me.

Thanks farmerman for furthering my own understanding. I spent some time looking for a brain sponge image to post. I didn't find one called a brain sponge, only one that looked brain-ish. I assumed for the sake of the post that the two creatures were related and I was tired and and and.....

So, can we assume that sponges came before corals and corals evolved from sponges?

2 Replies
1
Reply Sat 25 Oct, 2008 12:10 pm
@littlek,
Roberta must have had her precognition on last night, she posted sponges to her beautiful animal thread!
0 Replies
1
Reply Sat 25 Oct, 2008 12:16 pm
@littlek,
I believe that sponges came first but I have no real evidence that I can quickly look to. The "Treatise..." , which is the bible for fossils, is 46 volumes in length now and an equal number of CD's. (I heard theyre gonna web it by subscription ).

Look up."The Treatise of Invertebrate Paeontology" maybe its already there. The treatise keeps all sorts of archane trivia and Fossil ages for every Phyla. Let us know. Im certain that coelenterates came after sponges and that the spiny sponges were like a "missing link" in the late CAmbrian
2 Replies
1
Reply Sat 25 Oct, 2008 12:19 pm
@farmerman,
Would make sense, as corals are more complex (with their asses and all).
0 Replies