The Marshlands of Modern Iraq

Forums: Iraq, Marsh Arabs, Restoration, Marsh, Marshlands
Email this Topic • Print this Page
Reply Sat 6 Sep, 2008 03:22 pm
The Cradle of Civilization was established between the Tigris and the Euphrates rivers in what is now modern Iraq. Here is the area where many believe the Garden of Eden was set. For 5000 years, the Marsh Arabs, or Maˤdān, have lived in their unique way. Before settling in the marshes, these Arabs' origins are uncertain. Some cultural traditions link them to Indians and Persians, to Bedouin and Sumerians.

In the 1950s, those in power in Iraq channeled water out of the marshes for use elsewhere. In the early 1990s, Saddam Hussein drained the marshes to punish the largely Shia population after the Shia uprising. The drying up of the marshes nearly destroyed an ancient way of life. It also severely disrupted a major North-South bird migration route between Africa and Europe.

In 2003, efforts began to restore the marshlands to benefit both the Marsh Arabs and the migrating bird populations. Today, those efforts are bearing sort of stunted fruits. Upriver channeling of water from the two rivers prevent historic levels of water from reaching the marshes. The water that does arrive is often polluted and saline. Birds will likely return, but the Maˤdān have largely left the area. The ancient lifestyle, abundant thousands of years ago, is now harsh and impoverished. 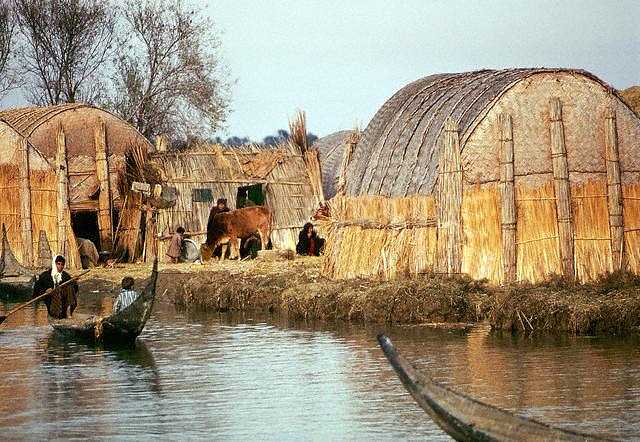 Can you say anything about fish populations? I imagine that they used to be a large part of the Marsh Arab's diet, but that their population has een greatly reduced by the salinity and the pollution in the water. Is that the case? And if so, how big of a problem is it for the Marsh Arabs?
1 Reply
0
Reply Sat 6 Sep, 2008 04:17 pm
@littlek,
an act of rape of the land and destruction of culture that goes unnoticed only because the crimes committed by this man are so horrible that this event is less worthy than the others of time. Saddam is the one who gassed the kurds, set the oil fields on fire spewing oil onto the earthy and damaging the future ability to pump the oil out of the ground, destroyed the iraqi intelligentsia, got multiple tens of thousands of soldiers killed for no purpose, impoverished a nation, .........
0 Replies
1
Reply Sat 6 Sep, 2008 04:56 pm
@Thomas,
Quote:

In 1988, an estimated 500,000 people lived in the region of land cradled between the Euphrates and Tigris rivers just north of where the two waterways drain into the Persian Gulf. Their traditional way of life was based on subsistence living. They fished for consumption and commerce (60 per cent of fish on Iraq’s market once came from the marshes), raised water buffalo for milk, and used the tall thick reeds of the marshes for constructing homes and making carpets, baskets and other household items.

"Our recent field studies have found a remarkable rate of native species re-establishment - of macroinvertebrates, macrophytes, fish and birds in re-flooded marshes.

"But the future availability of water for restoration is in question because of increasing urban and agricultural demands for water in Iraq, as well as in Turkey, Syria and Iran, suggesting only a portion of the former marshes can be restored, " Professor Richardson observed.

Some Preliminary Indicators of Marsh Rehabilitation Impact on Fishery Biology

The present study is part of a stock assessment program on marsh fishes, concerned with some preliminary indicators to clarify the impact of rehabilitation on fish biology in the Huwaiza, Basrah and Central Marshes. During the first steps of sampling, 30 species have been recorded, including 7 marine species (river shad, yellow-fin seabream, white fish, anchovy and three mullet species). Most of these species were recorded in Basrah Marsh (27), while 17 species each were recorded in the Huwaiza and Central Marshes. The samples were dominated by Liza abu, Barbus luteus, Carassius auratus, C. carassius and Alburnus sp. The preliminary indicators of reproductive biology, maturation stage and ichthyoplankton abundance appear to be a positive sign for restoring the biological role of the marshes as a spawning and nursery ground. Many larvae of L. abu and carp species were collected particularly during March and April. Although the growth parameters have not been determined, the initial length frequency data of L. abu, B. luteus, C. auratus, Heteropneustus fossilis and Mastacembelus mastacembelus could be extrapolated to lengths approaching the L8 for each species. Cohort analyses by the FiSAT II program revealed that there are different age structures for most fish species. The food habits exhibited similar food component patterns in comparison with studies carried out in the 1980's for L. abu, B. luteus and Cyprinus carpio. This study clarifies the restoration of food availability of different items in this region that give an advantage for feeding specialization

Iraq has been accused of following through with its marsh-
draining project for military and political purposes -- not for
agricultural purposes, as the official line insists. An official
Iraqi document in the possession of an Iraqi engineer who was
captured by resistance forces in the area, provides details about
what is transpiring in the marsh area: "It contained instructions
to 'withdraw all foodstuffs, ban the sale of fish and prohibit
transport to and from the areas.' Mass arrests, assassinations,
poisoning the water and burning villages were also ordered by the
Iraqi regime." Agriculture has nothing to do with what is
actually transpiring.

http://www.american.edu/TED/MARSH.HTM
0 Replies
1
Reply Sat 6 Sep, 2008 06:25 pm
@littlek,
a very interesting book book about the people living in the marshlands of iraq was written by RORY STEWART .

In August 2003, at the age of thirty, Rory Stewart took a taxi from Jordan to Baghdad. A Farsi-speaking British diplomat, he spent the next eleven months negotiating hostage releases, holding elections, and splicing together some semblance of an infrastructure for a population of millions teetering on the brink of civil war. The Prince of the Marshes tells the story of Stewart's year.

i very much enjoyed reading his books and posted some comments about a year ago on the IRAQ thread .
since our local library purchased his books , i didn't even have to buy them (cheapskate !) .
rory stewart has been interviewed on CBC-TV . certainly a very interesting fellow who has seen - and lived in - parts of the world i'll never see .
hbg