Forums: Pets And Garden, Animals, Wildlife, Animal Photos
Email this Topic • Print this Page
Reply Tue 20 May, 2008 10:30 pm
Bigred
I got the picture of the raccoon and the opossum through the sliding glass door eating together. It was dark outside and I was inside the house. This picture shows them nose to nose!!!!!!

You said it was rare to see animals from different species eat together. To me it is normal.

0 Replies
1
Reply Tue 20 May, 2008 11:14 pm
Well, don't go by me, I've funny eyes re discerning in darkness. I have had possums live under my house, and raccoons in our gallery space. Thus a story some time ago re scratching over our bathroom toilet... well, that's another tale for another day.
0 Replies
1
Reply Tue 20 May, 2008 11:15 pm
I don't know if opossums can be tamed, I've no experience with that.

0 Replies
1
Reply Wed 21 May, 2008 05:09 am
weve got a lot of rabid racoons around here. There was a cat over near STrsasburg that got chewed up , and now theyre keeping it in isolation till its safe (or it has to be destroyed)

Get all of your animals vaccinated ASAP. I dont know what the situation is out where you are but rabbis is a pandemic in the US.
1 Reply
1
Reply Wed 21 May, 2008 06:26 am
Thanks farmerman

The outside cat isn't mine. He adopted me and won't leave. He was my neighbor's cat and he would not go home. I took him back home physically several times. Then the neighbor moved and left him.

My personal dog & cat are up to date on their shots and are inside only animals.

For some reason the outside cat, raccoons and opossums have gotten along together for at least 6 years. That is how long the outside cat has been living outside.
0 Replies
1
Reply Wed 21 May, 2008 08:45 am
Oh cool! This doesn't surprise me because I've seen cats hanging out with raccoons and skunks. Wish I had taken picks of them.
0 Replies
1
Reply Wed 21 May, 2008 08:50 am
I never thought to take a picture until Bigred mentioned it. It was so cute...the raccoon slept in the grass in the middle of my back yard last night.

There are 3 families and a total of 12 raccoons that live in my back yard. The 3 families stay separate from one another. They do not like each other.
0 Replies
1
Reply Wed 21 May, 2008 12:26 pm
It's a couple of good shots of the two species together TTH.
You should offer then to an animal photo specialist. Might be a good photo contest winner.

0 Replies
1
Reply Wed 21 May, 2008 03:21 pm
The photos aren't very good. Dark, rain and the sliding glass window made it hard to get a good shot. I'm glad I finally got the shot and was able to show you though 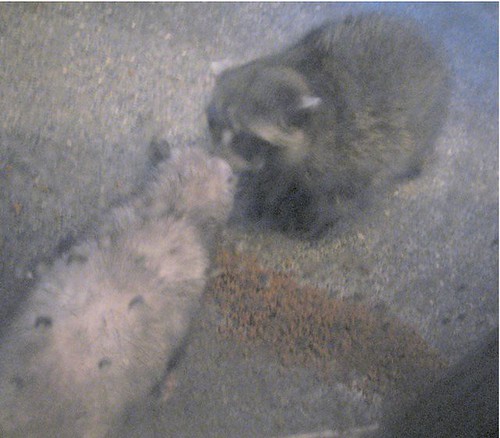 0 Replies
3
Reply Wed 28 May, 2008 04:40 am
youre playing with fire here. A raccoon can disembowel a hunting dog really quickly because they dont have any built in congenital "brakes" on their actions like domesticated animals have. If the cat were to make an unfriendly act that appeared life threatening to the raccoon, the cat could be really badly mauled or killed.
Its such a pretty cat, Id hate that you let this get too far.

Raccoons are omnivorous and wont normally attack anything that would be a threat to its ability to hunt. However, hes always sizing up the cat and planning to circumvent the cats defenses. The cat, on the other hand, is showing a classic dominance/submissive response by not looking at the coon. THAT IS A BAD MOVE, the coon coul look on that as an opening.

Please be careful
0 Replies
1
Reply Wed 28 May, 2008 10:06 am
Farmerman,
Maybe that is true in most cases, but this cat has been living in my backyard for years with raccoons. I have seen the cat get mad, hiss and challenge the raccoons over the years. The raccoons have always backed down.

The reason the cat even turned it's head was because I was calling his name so he would look to the camera. The cat and raccoons have even been nose to nose just to get familiar with each other. I just don't have pictures of that.
0 Replies