Forums: Australia
Email this Topic • Print this Page
Reply Fri 7 Mar, 2008 02:13 am
This is the first public comment our former (Oz) prime minister has made since his very nasty fall from grace since the last election here. His "vision" was resoundingly rejected by Australian voters & the Rudd Labor government was installed as a result.

Interestingly, this speech was made to (what I understand to be) a US right wing think tank. While receiving something called the Irving Kristol Award!

Seems strange to me, to have an Australian PM who appears to feel more at home in the US (& with conservative US politics) than in his own country.

What do you make of his words? And this strange award?: 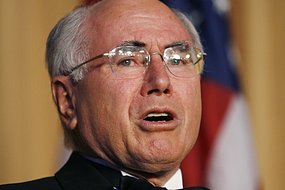 Former prime minister John Howard has hit out at several of the Rudd Government's policies while giving a major speech in the United States.

Mr Howard has given an address at a gala dinner for the American Enterprise Institute in Washington, where he received the Irving Kristol Award.

He has told the audience that scrapping the WorkChoices laws is the first time in 25 years that a major economic reform has been reversed.

"That will be a mistake," he said.

"In particular, bringing back the old unfair dismissal laws will stifle employment growth amongst small businesses."

And he has described his disappointment at the moves to bring Australian troops home from Iraq.

"No one should doubt what is at stake in Iraq," he said.

"There is a view in some quarters that Afghanistan is the good war and Iraq somehow a distraction from winning the war on terror.

"While it may be politically convenient this view is profoundly naive and dangerous."

He says that the surge of US troops into Iraq is having a positive effect, and he is critical of media coverage of Iraq.

"Much to the surprise of many experts - and to the chagrin of many who are critical of America and of the Bush Administration in particular - the surge strategy in Iraq is beginning to bear fruit," he said.

"Security has improved, casualties are down, there are signs of a return to more normal life in Baghdad and the Iraqi political system has finally made a start in addressing some of the nation's fundamental challenges.

"But perhaps the most convincing sign of all that some progress has been made is the significant decline in media coverage of Iraq - noticeable both in the United States and Australia.

"The dominant left-liberal elements in the media in both our countries apparently cannot bring themselves to acknowledge good news stories coming out of Baghdad."

He notes the Rudd Government's decision to continue some of the policies of his own government, but is sceptical of the depth of Labor's commitment to such ideas.

"On a smaller scale, in my own country, a number of the more conservative social policies of my government have been endorsed by the new Australian government," he said.

"The sincerity of its conversion will be tested by experience of office."

In the speech, entitled 'Sharing our common values', Mr Howard also says one of the major challenges for today's conservatives is remining focused on the fight against "Islamic fascism".

"It relies on indiscriminate terror without regard to the identity or faith of its victims," he said.

"It also calculates that it is the nature of western societies to grow weary of long struggles and protracted debates. They produce, over time, a growing pressure for resolution or accommodation.

"The particular challenge posed by extremist Islam means therefore that more than ever before continued cultural self-belief is critical to national strength.

He says former US president Ronald Reagan and "that other great warrior in our cause, [former British prime minister] Margaret Thatcher" taught conservatives many things.

"In the protracted struggle against Islamic extremism there will be no stronger weapon than the maintenance by western liberal democracies of a steadfast belief in the continuing worth of our own national value systems. And where necessary a soaring optimism about the future of freedom and democracy," he said.

"We should not think that by trading away some of the values which have made us who we are will buy us either immunity from terrorists or respect from noisy minorities.

"If the butter of common national values is spread too thinly it will disappear altogether."

How can a political leader be so resoundingly defeated by the voters of his own country & yet be the recipient of an award by another country for the very same policies & actions? I find this perplexing.

How can a political leader be so resoundingly defeated by the voters of his own country & yet be the recipient of an award by another country for the very same policies & actions?

What exactly is the American Enterprise Institute, (some Republican Party front?) anyway? And just how interested would they actually be in what happens in Australia? I find it strange that they would be remotely interested in say, IR policy in Oz.


Well, being cast out by your own people when you are a staunch toady to the current leading faction of a powerful empire is not going to stop that faction from giving you gongs.

a. The gong was long-planned

b. The gong is a consolation and thank you prize for being so sweet an' all.

... & what do you make of a former Australian PM who slags off the new government of his country to some "institute" of another country?
Where are his real loyalties? And why?


He's a mean-spirited man who believed fervently that his policies were what needed to be. He became unable to perceive how unpopular they were, and how unpopular he was.


He's not going to change just because he got the boot. Imagine his inner rage and pain that his political life ended so ignominiously!!! He must be full of bile and spite.

Could explain a little about his demise, don't you think? :wink:

... & what do you make of a former Australian PM who slags off the new government of his country to some "institute" of another country?
Where are his real loyalties? And why?


He's a mean-spirited man who believed fervently that his policies were what needed to be. He became unable to perceive how unpopular they were, and how unpopular he was.


He's not going to change just because he got the boot. Imagine his inner rage and pain that his political life ended so ignominiously!!! He must be full of bile and spite.


I don't think Keating held back at all, either.

But at least Keating was funny! And he didn't exactly screw his own party after leaving!

I do recall that Mr Howard declared that he would retire gracefully (after leaving politics) & not go down the Keating/Hawke road of commenting on politics after losing office.

Not only is he (by this speech) mean spirited to Australians who voted his government out (say nothing of him losing his own seat! No mean achievement!), but he's also undermining his own party by his last desperate grasps for credibility with his discredited US mates. He doesn't appear to care about anyone but himself.

Makes you wonder where the man's head actually is, don't it?

And his heart, if he actually has one.

He thought he'd be another Thatcher, another Reagan, a fellow traveller with GWB ...... & fell flat on his face! And now he's a sore loser.

I can't believe you guys had such an imbecile as PM for that long.

Biggest bumlicker to the Whitehouse, ever.

You could say that! :wink:

We had Menzies grovelling to the Queen of England .... depressed when he had to return to his own country from "the mother country" ...

And that fellow (forgotten his name!) who wanted to go "all the way with LBJ" in Vietnam when most of us didn't....

... & Howard, who appears to have more loyalty to extreme right wing US interests than to the people of his own country ...

Why do we end up with these pathetic people in office?

What are we doing wrong?

We're getting rid of Helen this year. Well past her use-by date. Turning into a leftwing Nazi nana who will not be questioned.

Maybe critical thinking needs to be introduced into the Australian school curriculum?

Generally speaking, the politicians in the 'West' have been declining in quality over the last 20 or 30 years.

One of the main causes has been the corporatisation of politics. Politics has become a puppet of corporations, rather than a secular body, meaning that compromise is the name of the game. This also means that those with real power have moved into the corporate world and call the shots from there. 30 years ago a Prime Minister and senior politicians were amongst the highest paid people in Australia and NZ. Now they are not. But they are better actors.
0 Replies
1
Reply Sun 9 Mar, 2008 03:46 am
I see your point.

But that doesn't explain Menzies.