Forums: Travel, Architecture, Hotels, Smart Design, Intuitive Technology
Email this Topic • Print this Page
Tue 15 Jan, 2008 02:37 pm
Even I, most fond of old fashioned comfortable hotels, sometimes even decrepit ones, would like to stay in this one for a few days...


LINK for You can go home again, but why? NYT article on design at the Peninsula Hotel in Tokyo 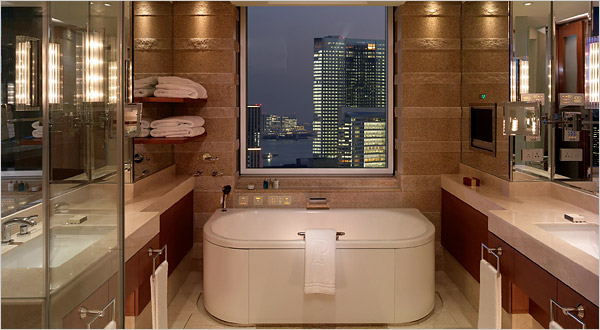 QUEBEC ICE HOTEL
0 Replies
1
Wed 16 Jan, 2008 07:08 pm
I was comped a luxury suite at a Vegas Hotel once. It scared me, what with all the damn mirrors all over the place . It had a shower as big as my tobacco barn and a grand piano in an entertainment room. I felt that I needed a posse.

I like the neat Art Deco Hotels in NY where theyve restored the old buildings with the small rooms and suites.

I always wondered about that seasonal ice hotel. Its gotta be freezing in there, No? I mean consider the "shrinkage"
0 Replies
1
Wed 16 Jan, 2008 07:14 pm
I like those kind of restored oldies too, Farmerman.

I like all the cool doodads in the Tokyo hotel. Hopefully some of 'em will trickle down eventually.
0 Replies
1
Wed 16 Jan, 2008 07:26 pm
Even this techphobe was interested in all the design thought behind the doodads. Hmm, doodad, dadpad, drewdad, ddddddd.
0 Replies
1
Wed 16 Jan, 2008 07:34 pm
Well, now, for the polar opposite (perhaps, I've no idea re the amenities) --
http://www.fairmont.com/frontenac/slideshowposting.htm?DisplayType=Popup

Though I'd rather have a shower in front of the window, than a tub.

OssoB, I think you'd like any of that series of railroad hotels. The hamburgers stayed in the local one when they were here just before Christmas. The Fairmont owners have done some nice gentle updating work.
0 Replies
1
Wed 16 Jan, 2008 07:54 pm
This is the fanciest place I've ever stayed at, with my husband in some kind of comedy at the time, or it started out as such. (Wonderful evening indeed, including the pizza at a local bowling alley. But, so nice to see the sun set from the longest balcony in Toscana.)

I should explain. 1st trip to Italy. Basic budget stuff by ourselves. As it happened, we were lucky. The one star place I picked in Rome was charming, sort of funky, now a 3 star, with habitues from the FAO, so the lobby and breakfast room were very interesting re occupants. But never mind that, I want to talk about the place in Sesto Fiorentino outside of Firenze, near of couple of rather good gardens. I picked it to check out from our small american express guide book, still a good guidebook to Tuscany, if outdated by two decades now. It was some old castle listed as moderate in price.

We walked in and nearly ran out. But they saw us, greeted us.
My italian, never good, was better than my husband's, so I started in. But of course the woman spoke english. (I;m guessing now, perhaps the owner, or perhaps not.) I asked the room rate. I think it was $250. a night, and this was in '88. That was approximately 4 times our extreme max. (We travelled for a month, often at much lower room rates than that max.) Neither of us answered, busy as we were trying to figure out what to say. The woman said, well, we are just opening for the season, or maybe I surmised that. You may have a room for $150. We looked at each other. Then she said, without breakfast, $125. We looked at each other again, I turned to the woman and said that will be fine. (We got the matrimonial suite, lordie, angels apparently holding the chandelier in place...)

That entrance hallway shown in the photos on the link is what made me want to turn around and run...


The prices listed on the site don't seem that bad, in relative terms re some of the stratospheric amounts some hotels charge. (just saw about one in Abu Dhabi with a top of $12,000. a day.) Quite a place. I'd stay there again in a minute, and would have dinner there the next time.
0 Replies
1
Fri 18 Jan, 2008 01:53 pm
we've enjoyed staying at many of canada's RAILROAD HOTELS over the years - the hotels in the rocky mountains probably have the most stunning locations .

another one who likes these hotels - who are now under the FAIRMONT name - is a saudi prince . i agree , he has good tatse !

from article linked below :

Analysts says celebs and jet-setters are flocking to the hotel industry because of strong economic fundamentals. For example, occupancy in the U.S. luxury hotel segment has climbed from a low of 51.6% in December 2001 following the Sept. 11 terrorist attacks, to 70.3% in September 2007, according to Smith Travel Research. "At 50%-60%, you're cash-flow positive," says analyst Will Marks with JMP Securities in San Francisco. He adds that revenue per available room(RevPAR), a key metric in the hotel business, is up about 30% in the U.S. since hitting a low in 2001, with plenty upside remaining. "If we believe the industry is going to mirror the last cycle, then the outlook is strong," says Marks, noting RevPAR grew 50% during the last upswing. "The luxury segment has historically done well," says Duane Vinson, vice-president at Smith Travel Research. "It's the least volatile because during a recession the wealthy continue to travel."

That fact is not lost on Saudi Arabia's Prince Alwaleed Bin Talal Bin Abdulaziz Alsaud, ranked by Forbes as the world's 13th-richest man, with a personal fortune estimated to be US$20.3 billion. He has always had a penchant for the world's most iconic hotels, with interests that include such landmarks as the Plaza in New York, the Savoy in London and George V in Paris. But the Saudi blueblood pushed the ownership bar to near impossible heights by acquiring Toronto-based Fairmont Hotels & Resorts Inc. for US$3.9 billion in 2006, and Four Seasons Hotels Inc., also of Toronto, for US$3.8 billion in April of this year.

ps. haven't met the prince yet