Prehistoric fish had bite stronger than a T-rex

The first king of the beasts A fossil skull of Dunkleosteus terrelli, which had the strongest bite of any fish known. Photograph: Michael LaBarbera/PA


Meet Dunkleosteus, a four tonne, 10-metre, armour-plated fish that was arguably the first king of the beasts. The monster fish cruised the oceans 400m years ago, preying on creatures much larger than itself, its blade-like fangs adept at tearing its quarry in two.

Using fossilised skull remains, scientists have built up a biomechanical model of the fish's powerful jaw and surrounding musculature and reveal today that it had the strongest bite of any fish ever to exist.

Philip Anderson's team at the University of Chicago found that the predator's jaws snapped shut with a force of more than five tonnes. The jaws were articulated by a unique mechanism based on four rotational joints working in harmony, they report in the Royal Society journal, Biology Letters, today.

Dunkleosteus was the first known large predator, pre-dating the dinosaurs. It belonged to a diverse group of armoured fish, placoderms, that dominated the oceans in the Devonian period between 360m and 415m years ago. Its formidable bite allowed it to feast on other armoured aquatic animals, including primitive sharks and smaller creatures protected by bone-like casings.

"Dunkleosteus was able to devour anything in its environment," said Dr Anderson. The bladed jaws, which enabled the beast to take on prey much larger than its mouth, is a feature sharks did not develop until 100m years later.

Mark Westneat, curator of fishes at the Field Museum in Chicago added: "The most interesting part of this work for me was discovering that this heavily-armoured fish was both fast during jaw opening and quite powerful during jaw closing. This is possible due to the unique engineering design of its skull and different muscles used for opening and closing. And it made this fish into one of the first true apex predators seen in the vertebrate fossil record."

He's snoring loudly though, as I write. Maybe I'll leave it for an hour or so.
0 Replies
1
Reply Wed 29 Nov, 2006 08:56 am
From today's Chicago Tribune (graphics/photo from the print version, frontpage and page 8): Next to this fish, sharks are great white wimps


A fearsome mega-predator of the ancient seas had the most powerful jaws of any fish that ever lived, according to a new study that makes even the biggest great white shark seem like a slack-jawed weakling.

The new report by scientists at the Field Museum and the University of Chicago offers a unique window into the bizarre aquatic world of 400 million years ago, when the conquest of dry land by animals had barely begun and the first jawed creatures were carving out their evolutionary niches.

The fish in the new study, Dunkleosteus terrelli, was a toothless killer with bladelike jaws and a huge, armored head. Experts believe it grew up to 30 feet long and weighed as much as 4 tons--bigger than most modern sharks, and about the size of a killer whale.

But the animal's jaws would have set it apart from any latter-day seagoing carnivores.

Using fossil remains to build a computer model of the fish's bones and muscles, the Chicago researchers found that it could tear apart its food with a force of 1,100 pounds per square inch.

The fish needed that strength to pierce the bony armor that many sea creatures of that era possessed. Only alligators and Tyrannosaurus rex have had more powerful jaws, experts believe.

"This thing was capable of biting anything it came across in half," said study co-author Mark Westneat, associate curator of zoology, fish evolution and biomechanics at the Field Museum.

The work sets a new standard in its analysis of how a long-extinct species moved and ate its food, said Adam Summers, a professor of ecology and evolutionary biology at the University of California at Irvine.

Biologists in the past have used biomechanics to study how dinosaurs ran or consumed their prey. Summers said the new report, published in Wednesday's issue of the scientific journal Biology Letters, uses an innovative way of drawing on data taken from modern fish to determine how an extinct ocean predator used its jaws.

"We now have an idea of just how hard a fossil critter can bite," Summers said.

Scientists have been fascinated by Dunkleosteus since Ohio geologist Jay Terrell discovered the first fossil specimens in 1867.

To help calculate the ancient fish's biting power, the scientists spent a day fitting packing foam inside the jaws of a fossil replica at the Field Museum. That gave them a good estimate of how burly the animal's jaw muscles were.

U. of C. graduate student Philip Anderson also took extensive measurements of six Dunkleosteus skulls at the Cleveland Museum of Natural History. In addition to showing how the fish's joints fit together, the fossils bear scars where jaw muscles connected with the bone.

Westneat already had a computer model showing how such attributes affect the power and motion of jaws in modern fish. He plugged the fossil's measurements into that model to simulate how the extinct fish's jaws worked.

The comparison with living species shows that Dunkleosteus was unlike any living fish.

"We don't really have an animal that fills this kind of niche--a massively armored predator that bites that hard," said Summers.

In addition to having extremely strong jaws, researchers think the monstrous fish could move its jaws very quickly, creating a suction that drew smaller prey into its mouth.

Biologists say the predator may have used its strong jaws to hunt armored animals such as the ammonoids, an extinct species with a hard shell related to the octopus and squid. The fish's imposing jaws and the tough shells of its prey may have evolved in tandem, in what biologists describe as an evolutionary "arms race."

"These guys were probably the first marine predators to be able to bite food into pieces for swallowing," Westneat said. "Other predators were swallowing their prey whole."

Sharks later developed shearing teeth to tear prey apart, but that did not happen for another 100 million years after Dunkleosteus ruled the seas.

In fact, researchers believe Dunkleosteus was one of the first vertebrates that could be called an "apex predator," meaning that it had no natural enemies.Yet by about 360 million years ago the sea monster had died out, part of the mysterious mass extinction that marked the end of what biologists call the Devonian period. Many armored fish of that epoch died off, though no one really knows why.

"The Devonian extinction is not nearly as well understood as some other extinction events," Anderson said. "Dunkleosteus had thick armor on its skull and no armor behind, so it would have been very front-heavy."

Even if it was flawed, the mighty fish still sparks the imagination of some biologists.

"It would have been an awe-inspiring predator," Summers said. "We have nothing like that anymore." 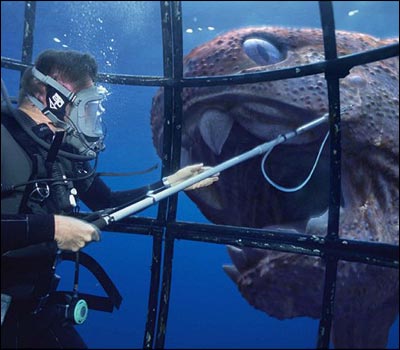