Forums: Europe
Email this Topic • Print this Page
Reply Tue 31 Oct, 2006 12:31 am
Around 100,000 illegal homes, including one owned by a former prime minister, face demolition in Spain, according to a new prosecutor appointed to tackle building fraud and corruption. Special prosecutor Antonio Vercher said yesterday Spanish law was clear that illegal homes should be demolished, regardless of whether they had been bought in good faith. Type: Discussion • Score: 0 • Views: 888 • Replies: 7
No top replies
1
Reply Tue 31 Oct, 2006 02:18 pm
It seems a very sad state of affairs indeed, that building projects of such a nature can be completed, sold to unsuspecting purchasers (mainly Brits) and then demolished when the government say they are illegal!

Not to be heartless, but the article did say that the purchasers were most probably aware that their purchase wasn't legal, and that the price they paid reflected that.

It's coincidental you posted this Walter, because I just got back from a trip to Spain and Portugal. I was in the Algarve in Portugal and traveled down the west coast of Spain from the Portuguese border to Gibralter on the southern tip of Spain - you could see Africa (Morrocco) across the water from where we were staying in Spain.

I was so impressed with the fact that even in the Algarve - which is the major tourist area of Portugal-there is no coastal road that links the beach towns. You have to travel inland to find a major road, and then back out to each separate town or beach on a smaller, auxilary road. This really cuts down on the coastal development.

In Spain, we had to travel 120 kilometers inland to Seville and then 120 kilometers back out to Cadiz - making a triangle. There, again, is no coastal road that links the cities. There is a huge national park along the western coast of Spain, so the coastal land and habitat is protected.

We didn't go to the Costa del Sol- Spains major tourist-beach area, so I don't know if it's the same there, but I'm really happy they are so concerned about coastal development. It's amazingly beautiful there- really one of the most beautiful coastal areas I've seen in the world - and I'm happy they're determined to keep it that way.

This is the view of the Atlantic Ocean from Cadiz - one of the oldest European cities. 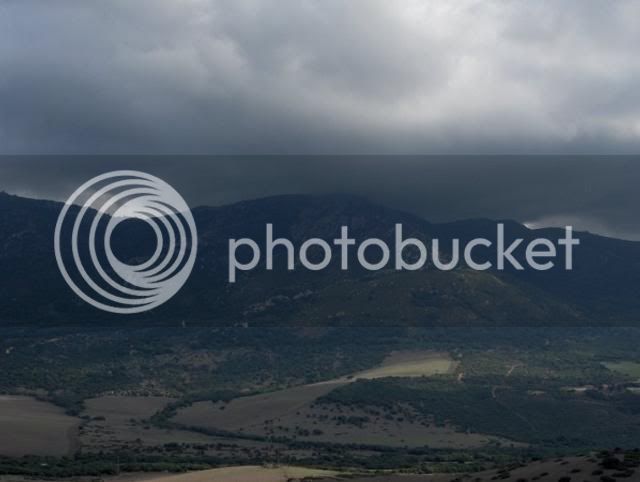 This is looking back from the ocean. There are acres and acres of completely unpopulated, unspoiled, and even untilled land running beside the western Spanish coast- as well as miles and miles of olive, and orange groves and cotton fields.

These are ruins of Bella Claudia, a coastal village that dates back to 200 BC. Their primary industry was salinization. The statue is of the emporer Trajan.

The southern tip of Spain - looking toward Africa

I feel for the people who lost their money and their vacation or retirement homes, but I can't say Spain is not better for it. I guess it pays to research your developers, and hire a good lawyer before you buy property abroad (or even in your own country for that matter).

This is how development should look, at least in my opinion - the ocean is just over that hill.

Yes, but more than 30 years ago - and totally in disregard of the beauty of that part of the world, I must confess

(And I met my wife there for the first time - she stayed in the same hotel as we did.

You guys should go back for an anniversary trip of something. I definitely want to explore more of Spain - the Pyrennes, Madrid, etc.- as well as to spend more time on that southwestern coast.
I was so impressed with the land, the people, and the food was awesome.
0 Replies