Forums: Internet
Email this Topic • Print this Page
Reply Mon 6 Feb, 2006 12:34 pm
I am facinated by this art confessional: www.postsecret.blogspot.com/

New postcards are posted every Sunday. I couldn't imagine missing it.

I've considered sending things in but I'm kind of chicken.

Not all of the secrets are big. Most of them are just things that people have trouble saying out loud. 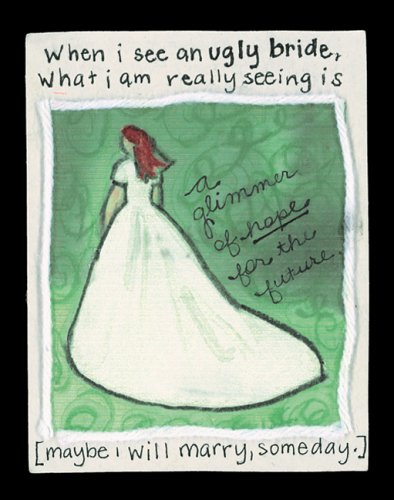 I think it's interesting to see those unspoken thoughts that people have.
0 Replies
1
Reply Mon 6 Feb, 2006 12:57 pm
Here's another one from the book: 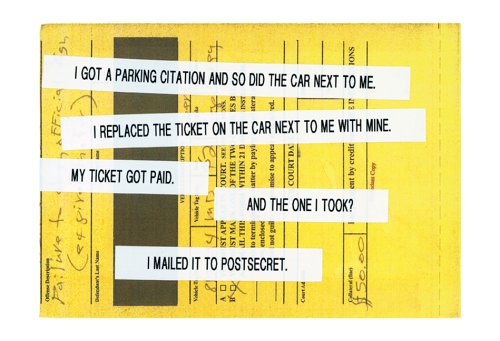 Some of the earlier ones would really bring a tear to my eye. There was one that stayed with me for days. Something to do with sexual abuse.

Someone unburdening themselves from something held inside for so long is so powerful.

Lately, I don't know, seems more like the thing to do.


I considered what kind of secret I would send...honestely couldn't come up with something that wouldn't dishonor anothers serious attempt to "get it out."
0 Replies
1
Reply Tue 7 Feb, 2006 12:34 pm
Momma Angel wrote:

I get in enough trouble posting on open forums so I think I will pass on this one.

You and me both!

Is the site really an "ongoing community art project" or is it a confessional?

How secret does the secret need to be?

Do the thoughts that people send in really count as secrets in the true sense of the word?

Are these really things they've never said outloud? To anyone?

For awhile, you could look back weeks and weeks. Now, I guess it's so popular they only store a week at a time.

I wish there was a way to look at the archives, I don't want to have to buy the book.

I can remember the first time I looked at that sight.

I knew it wasn't just me, I showed 2, maybe 3 people, and they had the same reaction.

It's like, what is the worst, what could I NEVER look someone in the eye and tell. Things that would make you crazy if you kept it inside.

Now it's more like "I scratched my boyfriends car with my keys and blamed it on his ex-girlfriend."


"I'm going to totally bang my english teacher this year. Wish me luck"

I think even ones like "english teacher" are interesting in that they offer a glimpse of someone else.

But I agree, some of the older ones were more moving. The one about "everyone who knew me before 9/11 thinks I'm dead" has had me scratching my head for a long time.
0 Replies
1
Reply Tue 7 Feb, 2006 01:09 pm
One was horrible, but funny in a sick way at the same time.

Someone saying they were made at their father or ex-boyfiend, so they poked a hole in all their condoms.

"interesting" is that code for "shaddup chai" hehe
0 Replies