Innocence is no excuse 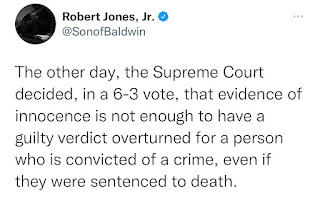 
WP opinion In death row case, the Supreme Court says guilt is now beside the point

In the 1993 case Herrera v. Collins, Supreme Court Justice Antonin Scalia made a staggering claim. The Constitution, Scalia wrote, does not prevent the government from executing a person who new evidence indicates might be “actually innocent” — that is, someone with the potential to legally demonstrate they did not commit the crime for which they were convicted. Scalia didn’t just make his point casually. It was the reason he wrote a concurring opinion.

Scalia’s claim was so outlandish that Justice Sandra Day O’Connor felt obliged to specifically rebut him, even though they agreed on the ultimate outcome in the case. Only one other justice joined Scalia’s opinion: Clarence Thomas.

Last week, Scalia’s once-fringe position became law. In Shinn v. Ramirez, the court voted 6 to 3 to overrule two lower courts and disregard the innocence claims of Barry Lee Jones, a prisoner on Arizona’s death row. Importantly, the majority did not rule that it found Jones’s innocence claims unpersuasive. Instead, it ruled that the federal courts are barred from even considering them. Thomas wrote the opinion.

Felony cases can generally be broken down into three phases: trial, appeal and post-conviction. During the latter phase, indigent defendants in capital cases typically get new attorneys and often broader access to police and prosecutor files. Consequently, post-conviction is often the phase in which wrongly convicted people discover the exculpatory evidence that eventually frees them.

The catch is that post-conviction is also when it’s most difficult to get back into court. Prisoners usually need to show not only that they’ve discovered new evidence that could exonerate them but also that said evidence couldn’t have been discovered at the time of the trial. If it could have been discovered at trial, they then need to clear another barrier — they must show that their trial attorney’s failure to find that evidence was an egregious mistake.

Jones was convicted in 1995 of killing his girlfriend’s daughter. The courts have acknowledged that Jones’s trial lawyer was ineffective and failed to find important exculpatory evidence. The problem is that Jones’s post-conviction lawyer was also ineffective. It wasn’t until years later, after Jones exhausted his state appeals, that a new team of attorneys finally found the exculpatory evidence.

Under Arizona law, defendants are responsible for their post-conviction lawyers’ mistakes. So Jones was barred from using the new evidence in state court.

Prior to 1996, this is where a federal court could intervene. But that year Congress passed the Antiterrorism and Effective Death Penalty Act, or AEDPA, which requires federal courts to show enormous deference to the states, even when federal judges believe a state court is wrong.

Jones was out of luck, then, until 2012, when the Supreme Court created a small loophole. If a prisoner had both an ineffective trial lawyer and an ineffective post-conviction lawyer, the court ruled, then federal courts could still step in.

Both a federal district court judge (appointed by George W. Bush) and a federal appeals court subsequently ruled that under the 2012 ruling, Jones’s attorneys were ineffective at both stages, that Jones could use the exculpatory evidence those lawyers failed to find. They also found that the new evidence would likely have resulted in Jones’s acquittal of murder. Jones had a glimmer of hope.

But last week the Supreme Court snuffed it out. Led by Thomas, the majority ruled that while the court’s 2012 decision did allow the federal courts to find that Jones’s post-conviction attorney was ineffective, AEDPA still bars Jones from using the evidence those attorneys failed to find in federal court. According to the majority, the federal courts can acknowledge that a prisoner’s state-appointed attorneys failed him at two critical points in his case, but they’re barred from actually doing anything about it.

It’s an illogical and profoundly cynical ruling, one that will almost certainly mean innocent people will remain behind bars — or be executed.

Thomas’s opinion is callous, at times even glib. He champions deference to state officials, courts and procedures, as well as the sanctity of jury verdicts, in a case in which a defendant was failed by two state-appointed attorneys, in which state officials failed to adequately investigate the alleged crime and in which state courts failed to do anything about any of it.

Thomas also recites the prosecution’s narrative — including gruesome details of the crime — as if it were fact, ignoring the numerous expert witnesses and two federal courts that have said the injury that caused the girl’s death couldn’t possibly have happened at the time and in the manner the state of Arizona claims.

The Supreme Court’s own history ought to impart some lessons here. In 1994, Scalia described in an unrelated death penalty case the heinous nature of the rape and murder for which Henry McCollum was convicted and sentenced to death in North Carolina. It was, Scalia argued, a poster case for the death penalty. About 20 years later, McCullum was exonerated and freed. In 2006, Chief Justice John G. Roberts Jr. wrote a dissenting opinion defending the Tennessee conviction of Paul House that also included graphic descriptions of the crime and a recitation of the state’s narrative as if it were fact. House, too, was later exonerated and released.

Thomas joined both of those opinions. He seems utterly unchastened that both were so clearly and consequentially wrong.

Every court to consider the actual merits of Barry Jones’s innocence claim has ruled that he should never have been convicted of murder. And every court to rule against Jones did so for procedural reasons without considering the new evidence. If Jones is executed, it will not be because there is overwhelming evidence of his guilt. It will be because of a technicality.

During oral arguments in 2021 for last week’s ruling, Brunn Roysden of the Arizona attorney general’s office said something that ought to chill us to the bone. When a federal court is deciding whether it has the power to overturn a state conviction, he said, “innocence isn’t enough.”

He said it again for emphasis. And then he won.

0 Replies
2
Reply Sun 5 Jun, 2022 04:41 am
This reminds me of when the Birmingham 6 were released, the reaction of some of my work colleagues was quite shocking.

One woman, who in her defence was from the Midlands, was most annoyed about how happy they had been on their release. She couldn't accept there was a wrongful conviction and that the actual perpetrators had escaped justice, as far as she was concerned the bombers were sticking two fingers up at the British public.

Someone else said that it didn't matter whether they were innocent or not, they should never be released because it takes away confidence in the courts.
0 Replies