Forums: Gardening
Email this Topic • Print this Page
Reply Thu 12 May, 2022 02:28 pm
Who's gardening this year and what are you planting?

The last couple of years my gardens have been invaded by a horrible quack grass so this year, I bought 5 large black canvas bags for my deck. I've got onions in one, garlic in another, a tomato plant in another (and will add lettuce to that), peas in another and herbs in the last one. I'm also cardboard box-growing potatoes.

I also started a bunch of cut flowers in trays but it's still too early to put them out (we had snow last week!) - cosmos, asters, zinnias, forgetmenots, jumbo marigolds, among others.

What about you all?

0 Replies
2
Reply Fri 13 May, 2022 10:40 am
@Mame,
I've been making two new beds for tomatoes because I've been growing them in the same place for way too long. These new beds had both been covered with landscape fabric for years so there was no turf to cut through. But that didn't stop roots from a big Norway maple –

– from traveling fifty feet and infesting the whole plot. But I had the last laugh as that big son of a bitch got cut down and turned into wood chips last fall.

The lettuce factory should provide the first fresh salad in a week or two. I start a flat of seedlings indoors, every two weeks, acclimate them in the shade for a week, and then plant them in rows.

This shows the lettuce factory and three Norway maples. The middle one fell down two years ago and the ones on either side were cut down last fall. Their demise means no more tree roots and lots more sunlight!
1 Reply
1
Reply Fri 13 May, 2022 11:36 am
@hightor,
Lovely job! What an organized and sensible garden, hightor.

I was watching a YouTube video on tomato planting because I haven't grown them in years - turns out if you dig a little deeper than you need to and add a can of sardines (in water), put some soil over it and then plant, your tomatoes will be fertilized all summer. I'm going to try that because I am a disorganized fertilizer.
1 Reply
1
Reply Fri 13 May, 2022 02:19 pm
@Mame,
That's really cool about those sardines! I'd be worried about skunks and raccoons though.
1 Reply
1
Reply Fri 13 May, 2022 02:22 pm
@hightor,
We don't have to worry about those critters but I did see a coyote loping down our sidewalk. We have a ton of those chasing after all the rabbits.
0 Replies
1
Reply Fri 13 May, 2022 02:23 pm
Gardening with Heidegger: from mystery to truth, via the earth

Epicurus held his classes in a garden in Athens, where he taught the nonexistence (or at least indifference) of the gods. Roughly 700 years later, Saint Augustine converted to Christianity in a garden. British aristocrats used gardens to display the flora of the lands they colonised, and Native Americans today use them to preserve the plants of their ancestors. Every culture of every age established gardens for practical reasons such as food and medicine but also had deeper motivations, such as aesthetics and spirituality. What is it that makes gardens so special?

No one ever claimed gardens served a single purpose, but the philosopher David E Cooper has written a concise book on the many reasons to praise them. In his A Philosophy of Gardens (2006), Cooper dismisses the idea of a garden as just a practical way of obtaining food and flowers. Instead, he gives us one ‘modest proposal’ and one ‘immodest’ proposal (his words). Neither is, from my perspective, modest, and both are insightful and reflect Martin Heidegger’s view of aesthetics.

Cooper’s modest proposal is that:

The Garden exemplifies the massive, but often unrecognised dependence of the human creative activity upon the co-operation of the natural world … embodying a unity between human beings and the natural world, an intimate co-dependence.

Note the emphasis on co-dependence. It might seem obvious that we rely on nature for a distinctive coloured iris or a tomato’s umami flavour, but how does nature rely on us? 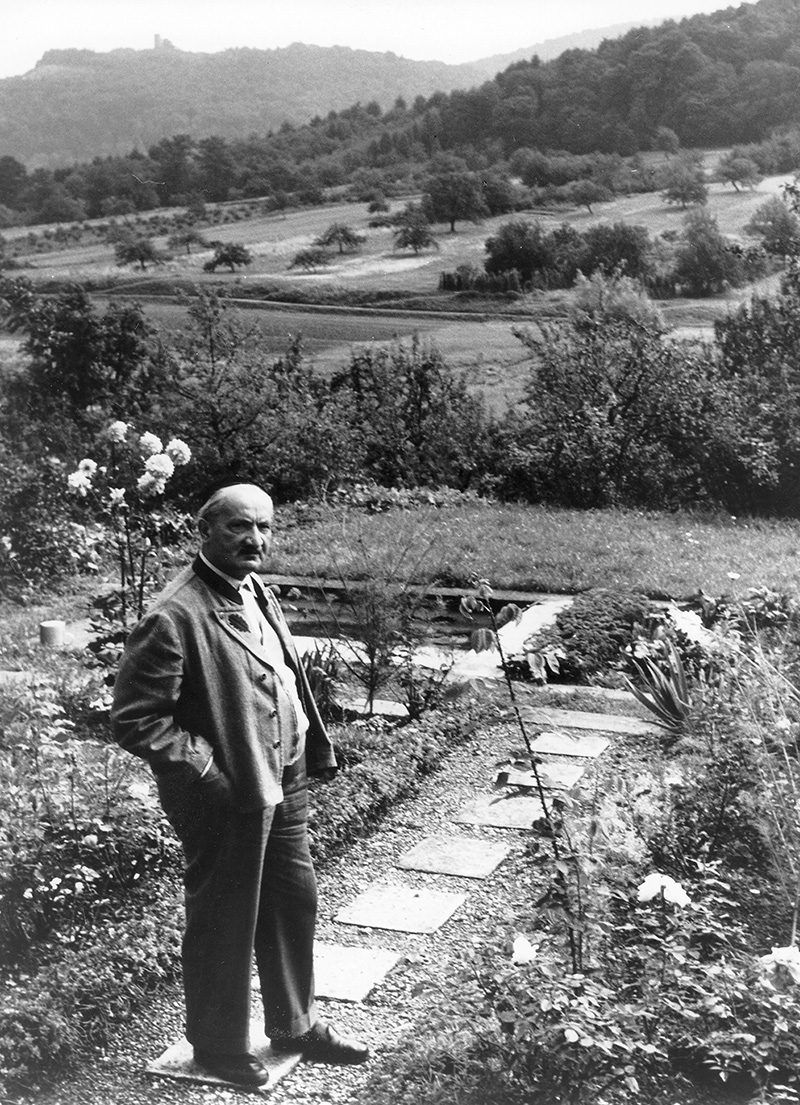 Martin Heidegger in his garden, c1964

In addition to benefitting physiologically from human care, Cooper describes how humans help nature express itself. He isn’t trying to anthropomorphise nature, suggesting that it yearns for our applause. Rather, the garden is more like a Roman mosaic whose beauty is revealed only after an archaeological dig. That mosaic has no more meaning than the Siberian tundra until it is discovered through human labour – the same can be said for nature’s revealing in a garden. When we consider Cooper’s immodest proposal, the garden becomes a work of profound art. The ‘meaning’ of a garden is ultimately posited as ‘an epiphany of man’s relationship to mystery’. The garden provides us with a direct but peculiar encounter with nature, an encounter that provides an intuitive hint at its essence but leaves us unable to express this essence in language.

Understanding this encounter requires us to revisit Heidegger’s philosophy of truth. Now, anytime we reference Heidegger a caveat is warranted: he was an unrepentant supporter of the Nazi Party. If one can accept that this fact doesn’t define every aspect of his philosophy, we can see that he also offers a poetic and profound perspective on aesthetics similar to Cooper’s depiction of the garden. So, let’s explore Heidegger to see what a Nazi can teach us about the garden.

For Heidegger, humans are thrown into a world they cannot fully understand, and whenever one truth about the world is revealed, other truths are hidden. The ‘truths’ in question here are not the standard facts we think about in terms of the laws of physics or who won the 2020 US presidential election. They are instead the more primordial truths that influence our perspective of the world, even our choice of words when discussing facts. A physics experiment that shows a vest can stop a bullet conceals the fact that all matter is mostly empty space, whereas a different experiment showing the vest is mostly empty space hides the fact that it can stop a bullet. It is like digging a hole to discover truths, using the soil we excavate to bury other truths. To better understand this world, we have to explore it, digging into the dirt to unveil treasures of truth. However, in Heidegger’s view, the dirt we remove must go somewhere, and that spoil pile will bury other truths.

As we stagger about trying to understand things, our actions reveal some truths. The part we understand Heidegger refers to as Welt (translated as ‘world’). Things that are true but remain hidden he refers to as Erde (‘earth’). Existence requires negotiating world and earth – that which we understand and that which is mystery, and we are indeed aware of both. Experiences or objects that make us aware of earth become, for Heidegger, holy or sublime. Importantly, earth projects authority in the sense of a divine oracle or a sacred text.

Our world, continuing in Heideggerian terms, teaches us when to plant tomatoes and how to prune roses, yet despite all the scientific advancements in botany, we understand only a modicum of nature. What gardener doesn’t pause from her weeding to marvel at the fecundity of a cucumber plant, the beauty of a hibiscus flower, or the ability of an asparagus plant to seemingly die in winter only to resurrect itself after a few warm days? No wonder our ancestors considered the soil and the plant life it supports a god possessing an authority surpassing the wisdom collected by all men.

To the ancient Greeks, the word ‘mystery’ did not refer just to an unknown but to a revealing. Religious life involved mystery cults, where rituals unveiled a truth to its members. The rituals did not prove a truth in the sense of logic or empirical evidence, but in the form of experience, emotion and art. A garden does the same. The soil, plants, and insects collectively instil a sense of wonder and esteem. In the garden, what we understand and what we can’t quite fathom come together, and this to Heidegger is the essence of art: earth rising up through world, becoming a happening of truth.

The garden reveals an eclectic medley of truths. There’s the practical guidance on raising children so they can be strong adults, like the fact that young plants started indoors need a brief exposure to the cold before they are transplanted. When explaining this to my students, I use the analogy of a homeschooled child, and how, instead of going straight from home schooling to public schools, it is best to first acclimate them by having them join a team sport. It is well known that growing different types of plants in the same area helps protect the plants from insect damage, telling us that in the garden, too, diversity can be a source of strength.

Cooper sees the garden as something much deeper than folk truths, though, something akin to Heidegger’s earth rising through world to unveil something more primordial. Tending a garden is perhaps the best metaphor for living a life, and that is why so much of Heidegger’s poetic philosophy uses a vocabulary reflective of gardening. Do a Google search of his quotes and you will come across ‘To dwell is to garden.’ It is not clear if or where he made this exact statement, but his essay ‘Building Dwelling Thinking’ makes a very similar argument.

Virtually all of Heidegger’s work concerns what it feels like to exist as a human being. His writings began as esoteric philosophy but evolved into something resembling poetic mythology. Cooper does us the service of returning that poetry back into a less cryptic philosophy, but even he waxes a bit mystical when he describes gardens as an epiphany of humans’ relationship to mystery. Could we not also say the same for music and religion, two human passions with a nebulous origin? So be it. What greater compliment can we give the garden than saying we can only explain what it is by singing its praises?

https://realselfsufficiency.com/how-to-grow-strawberries-from-scraps/
1 Reply
2
Reply Sun 15 May, 2022 09:24 am
@Region Philbis,
The best way to get strawberry plants is from runners.

After each cropping they send out runners, like spiderplants, which contain new strawberry plants.

When you have enough, cut the runner and plant the seedlings.

Remember to get rid of your old plants after two years.

Strawberry plants are really hardy and can survive all manner of neglect as well.

That's in a UK climate, I don't know so much about other places.
0 Replies