Desperately trying to appease the toddler who will never be completely satisfied.
0 Replies
3
Reply Wed 9 Feb, 2022 03:14 am
@Real Music,
Yeah, what are they doing? Not hearing much about other Republican candidates being put up for the next election. We have to watch the one and only Egopublican on the news all the time trying to get back in.
0 Replies
0
Reply Wed 9 Feb, 2022 07:41 am
@Real Music,
They are making at least one frightening move that it looks like they may get away with.

1. IÔÇÖm seeing so many red maps on social mediaÔÇöthey are redistricting black voters out of existence.

2. They seem to be geared up to go straight KanyeÔÇöopenly nuts on TV and doubling down. They are planning to censure the couple of Republicans who condemned the January 6 attack on the capital. ThatÔÇÖs a bold nutty position. Even McConnell stepped away from that.

Lisa Fairfax, Antoinette Coakley and Nina Simmons join MSNBCÔÇÖs Lawrence OÔÇÖDonnell to discuss
why Republican attacks against Judge Ketanji Brown Jackson were ÔÇ£just a show for no oneÔÇÖs
benefitÔÇØ and demonstrated that ÔÇ£enough never seems to be enough,ÔÇØ even for the most qualified
Supreme Court nominee in history.

0 Replies
2
Reply Sat 9 Apr, 2022 08:13 am
Dallas County Republican mail-in ballots were 'hand duplicated,' Democratic election judge reports
AUSTIN ÔÇö A report from a Democratic election judge for the March 1 primary indicated every Republican mail-in ballot cast in Dallas County had to be reproduced manually in order to be counted.

BedfordÔÇÖs report outlines several issues that occurred during early voting and on Election Day for the primary. Those included a technical issue with every Republican mail-in ballot that forced election staff to manually enter ballots into voting machines.

Bedford said ballots had to be ÔÇ£hand duplicated by the Central Count staff during the counting process.ÔÇØ That amounted to 2,777 Republican ballots that election staff had to manually enter into voting machines.


Probably looking up the ass's of elephants for their next candidate.
0 Replies
Below viewing threshold (view)
-5
Reply Sat 9 Apr, 2022 05:12 pm
@Real Music,
They're giving the Democrats enough rope to hang themselves with.

When all of you blow up the world because your beloved president is an ignoramus, we'll all be laughing at you from the Afterlife.
Where you'll be too busy trying to deny it exists.

Meanwhile, you guys have done everything you could not just to alienate black voters but Hispanics and Asians too.

What are Republicans doing? We don't need to be doing anything. We just need to fix everything afterwards.
0 Replies
3
Reply Sun 10 Apr, 2022 12:47 pm
Madison Cawthorn called for Fauci's imprisonment and Biden's impeachment while humping Trump's leg

Speaking to supporters of former President Donald Trump at a rally in North Carolina, freshman representative Cawthorn promised that Fauci will be jailed and Biden impeached.

"We will embrace the spirit of our Founding Fathers," Cawthorn said. "We will investigate Anthony Fauci and send him to jail for lying to Congress."

Fauci, the nation's topmost COVID-19 expert and the White House chief medical advisor, was a polarizing figure during the Trump administration because the former president would often publicly go against his recommendations to mitigate the effects of the coronavirus pandemic. 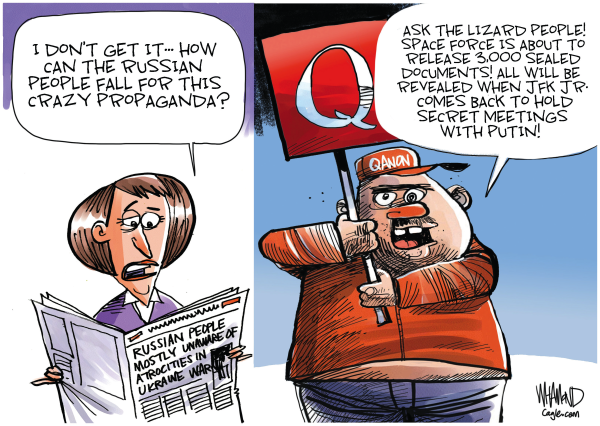 For Salt Lake County Republicans, warnings of voter fraud came from inside the party on Saturday. The vote to nominate a GOP candidate for Salt Lake County Clerk was marred when a pair of delegates were caught attempting to vote more than once, with one extra vote making it into a ballot box at SaturdayÔÇÖs county nominating convention.

The extra vote did not impact the outcome, as Goud Maragani easily won the nod from delegates over Nancy Lord. After the two cheaters were caught, the remaining delegates voted to expel them from their positions within the party. Republican officials said they planned to press charges, but itÔÇÖs unclear what laws may have been broken since SaturdayÔÇÖs vote was conducted as part of a private organization and not a governmental entity.

SaturdayÔÇÖs attempted ballot box stuffing at the Republican convention was more election fraud than has been proven in UtahÔÇÖs entire 2020 election.

The irony of the situation was undeniable, given how tightly the Salt Lake County GOP has embraced former President Donald TrumpÔÇÖs false claims about voter fraud in the 2020 election. It was at the center of MaraganiÔÇÖs successful pitch to delegates and other candidates spoke on the issue when it was their turn to address the convention. Party chair Chris Null broached the topic, teasing a forthcoming report from the party.

Republicans have finally found a coronavirus restriction they love: Title 42, the public health order implemented in March 2020 that allows the government to immediately expel noncitizens attempting to enter the United States instead of detaining them. Since the White House announced it was lifting the order starting in May, Republicans have piled on, including Senate Minority Leader Mitch McConnell (R-Ky.).

ÔÇ£ItÔÇÖs an outrageous decision to eliminate Title 42,ÔÇØ he said on ÔÇ£Fox News Sunday.ÔÇØ In the 12-minute interview, McConnell previewed the empty, misleading platform congressional Republicans will run on this year, but also provided Democrats evidence on how best to counter that platform.

Yep it's banned, along with "To Kill a Mockingbird." on page 6. I imagine there is an updated version somewhere, with a lot more classic books and children's stories pulled from the shelves. Disgusting. I don't even believe in banning favorable Nazi books, much less books concerning racial injustice or kids who are "different" in some way. I identified with the ugly duckling a little bit, I was different in the second grade with hearing aides in a new school.

2 Replies
3
Reply Fri 15 Apr, 2022 08:24 am
@revelette1,
The whole idea is ridiculous. I don't know of any books that have been banned over here since Spycatcher which was a bloody farce.

Obviously certain books are unsuitable for children and I don't know of any school that would allow obscene material, but anything aimed at children and deemed suitable for publication would make it.

We had problems with Thatcher banning the 'promotion of homosexuality' in schools back in the 80s.

As if, heterosexuality has been promoted since the year dot, kids aren't gay because of propaganda.

If propaganda was that effective nobody would be gay.

It's not about promoting, it's about accepting, making sure the gay kid isn't picked on, or the kid with two same sex parents isn't marginalised.

1 Reply
3
Reply Fri 15 Apr, 2022 09:49 am
@izzythepush,
The mind most needing freed is usually belongs to the big mouth surrounded by thugs.
0 Replies
3
Reply Fri 15 Apr, 2022 09:58 am
@revelette1,
The thing to remember here in the US the photo op and sound byte equal popular contemporary history.. The demagogues get a photo and five word policy statement to crow out in a campaign brochures.