Brewing beer may be an older craft than we realised

Forums: Archaeology
Email this Topic • Print this Page
Reply Thu 7 May, 2020 09:14 am
An international research team around the Austrian Academy of Sciences has developed a method by which malt-based foods can also be proven by means of burnt archaeological food remains - and in doing so has found the oldest evidence to date of possible beer production in Neolithic Central Europe.

Thanks to new research approaches, the archaeologists are on the trail of the oldest beer in Central Europe. It is certain that malted beverages were already being prepared on Lake Constance and Lake Zurich in the 4th millennium BC, says archaeobotanist Andreas Heiss from the Austrian Academy of Sciences (ÖAW). However, it is still unclear whether this was actually beer or a still non-alcoholic malt beverage.

Until now, sites in Celtic settlements in what is now Baden-Württemberg around the 5th to 4th century BC were considered to be the oldest breweries in Central Europe. However, the world's first beer - or at least something like it - could be much older. In 2018, researchers had found evidence in a cave in Israel that people there might have been brewing a beer-like drink 13,000 years ago. 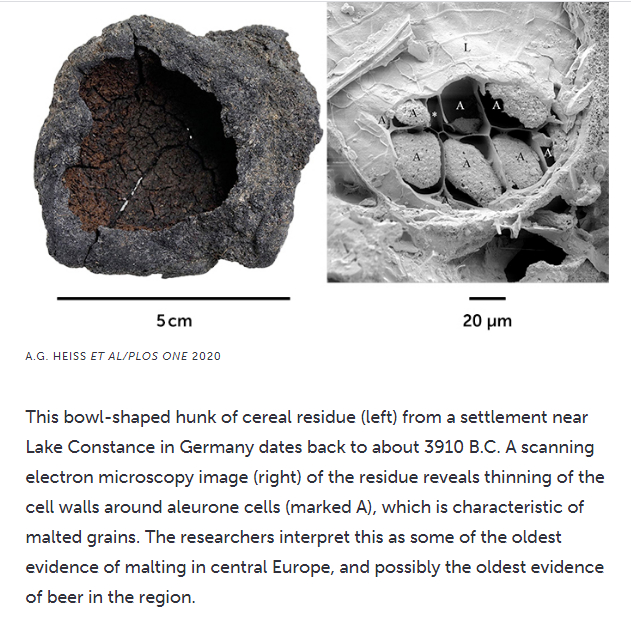 Austrian Academy of Science (in German)

Science News (report)
Type: Discussion • Score: 1 • Views: 326 • Replies: 1
No top replies
2
Reply Thu 7 May, 2020 11:37 pm
@Walter Hinteler,
Ive always wondered where first evidence of malted grains was id'd. Weve had evidence of it in SOuth American pre Columbian civilizations but these were no older than 1000 ybp . This was the first time Ive read that using microscopy to see the eroded seed cuticle (as the grain sprouts) . Its so darn obvious yet Id never read anything about it.
0 Replies