Turning Points of WWII that Led Nazis to Loss 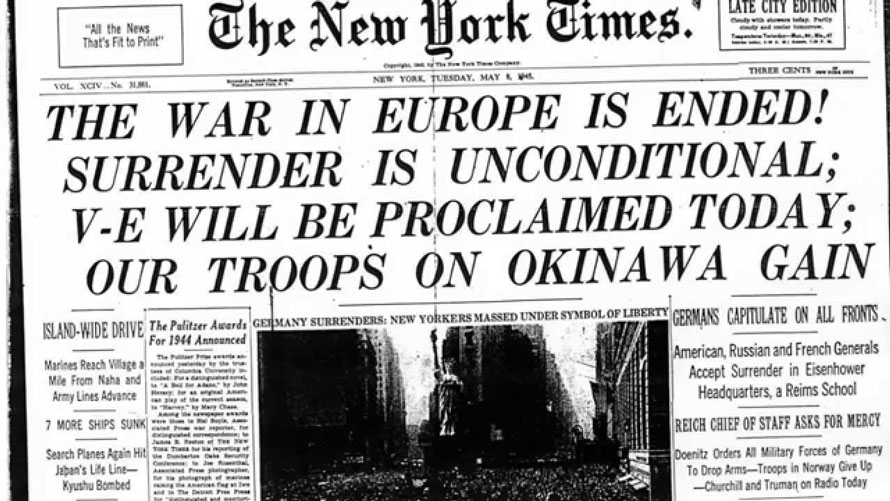 Seventy four years ago the most terrifying war in the history of humanity ended. It involved 80% of the planet's population and according to various estimations took the lives of 60-65 million people. Taking into account a rather tense foreign policy situation, it will be worth recalling the most significant events of that war and their contribution to the victory over the Hitler Germany and its allies.

September 1, 1939 the German troops crossed the Polish border. The pretext for the intrusion was capture of the radio station in Gliwice. Later it revealed that the invaders were SS soldiers dressed in Polish military uniform. Then the UK, France and other countries having alliance obligations towards Poland declared war on Germany. Thus the WWII began. Polish army was unable to organize sufficient resistance to the well-trained and perfectly armed German soldiers. However, there were really fierce battles on some areas. For instance, 720 soldiers restrained a 40,000 Hitler's unit during three days. However, on September 17 the Polish government escaped to Romania, and on September 28 German troops occupied Warsaw.

Despite a declared war the UK and France don't actively fight up to April, 1940. Some skirmishes periodically take place on the sea. However, starting from April 9 Germany actively attacks in Europe and by the end of May occupies the most of European countries. On June 14 the Hitler's forces entered Paris without a fight. The unique but very significant event of that period is the evacuation of almost 240,000 British soldiers through Dunkirk. Thus, despite a tactical defeat Great Britain managed to preserve the military staff.

After the occupation of France Hitler ordered to invade Britain. However, taking into account the power of the Royal Fleet and the absence of landing operations experience, German command decided to ensure air supremacy. For two months of attacks to English cities a great number of civil people died. Nevertheless, the His Majesty's subjects managed to win 'the battle for Britain' and frustrate German plans to invade the island.

The attack on the Soviet Union was one of the most significant Hitler's initiatives in the entire war. In a short time German forces advanced deep into the country, destroying significant forces of the Red Army. A great amount of material resources was captured. Military units made up of captives were formed for the further war on the Eastern front. However, the global aim of the Barbarossa operation - the overthrow of communists and the capture of the capital - was never achieved.

It was where the Hitler's forces were defeated for the first time. Ignoring casualties, the Soviet troops defended the capital and went on a counterattack. As a result Germans were thrown 200-250 kilometers back from the Soviet capital by early 1942.

The battle lasted as long as 90 minutes and ended with a paralysis of the US Fleet in the Pacific Ocean. That event did become the cause of the US entry into the war. It's really one of the turning points of the whole war.

It's the most important victory of the American Navy over Japan, which allowed seizing the strategic initiative in the Southern part of the Pacific Ocean. Four brand-new Japanese aircraft carriers were sent to the bottom there.

The landing of allies in Morocco and Algeria was the first successful offensive operation against the Hitler's forces. Moreover, the Torch operation was the first one the American troops took part in. That operation created prerequisites to the invasion of Sicily and Italy capitulation.

That battle on the USSR territory lasted three months. As a result German troops were cut off from reserve forces and gave up in January 31. It was the first time in the entire war when the whole army surrendered. It was an anxious signal for the Third Reich leadership. After that battle the Nazi Germany went to defense.

The offense of the Hitler's forces was stopped at the cost of enormous casualties. However, the counterattack of the Soviet troops provided the strategic initiative all over the front, and by February 1944 the Red Army achieved the prewar border.

After the victory in North Africa the allies consolidated success with bombing of Rome on May 16, 1943 and landed on Sicily on July 10. The troops loyal to Mussolini got into a critical situation, and that fact significantly swayed his positions in the country. As a result of the plot of his nearest allies the Italian dictator was arrested on July 25. On September 3, Italy signed capitulation act without any amendments.

Thanks to the landing of the allies on Normandy on June 6, 1944 it became possible to quickly free Western Europe. The D-Day and further combats are considered to be the main events of the whole war. As a result the Wehrmacht troops retreated to the very German border.

The offensive of the Soviet troops in Belarus three days after the D-Day got the name of the Bagration operation. Thanks to its scale and results it may be considered as the most important one in the Eastern Front. During the operation the whole German army was destroyed and the rest of militarized Wehrmacht groups who realized that the allies were coming from the West, were finally defeated.

The defeat of the German-Romanian unit in Moldova and the withdrawal of Romania from the war are rightfully considered to be another turning point in the war. The artillery preparation before the attack was so strong that 10 kilometers of defensive positions were burnt up in a few hours. The German-Romanian Jassy-Kishinev unit was surrounded by August 24, i.e. just four days after the start of the operation. At the same time an uprising broke out in Bucharest and the Nazi government got arrested. The surrounded troops and reinforcements sent by Hitler to oppress the uprising got destroyed by August 29.That battle opened the way for the Soviet troops to the Balkans where the Wehrmacht troops fled from being frustrated with an overwhelming defeat of Romania and Moldova.

The Soviet troops finally surrounded the German capital. The assault began and about 460 thousand Soviet people took part in it. The garrison of Berlin counted not less than 200 thousand soldiers and officers. Despite fierce resistance and strong defensive positions, by May 1, the Wehrmacht troops only owned the Tiergarten park and the governmental block. At night on May 2, the last center of organized resistance, which is the Reichstag garrison, capitulated.

After that Adolf Hitler's regime lasted for less than a week. Being aware of inevitable retribution, he committed a suicide. The outstanding success of allies on the Western front as well as the swift offensive of the Soviet troops on the Eastern front didn't give that monster of the XX century a chance to survive. Japan, the last ally of the Third Reich, lasted a little longer. After a streak of major defeats by the end of July and Hiroshima and Nagasaki nuclear bombing on August 6 and 9 respectively, the capitulation act of Japan was signed on the USS Missouri board on September 2, 1945. Today, 79 years after the most terrible war on planet Earth, the history lessons need to be remembered. Who knows if a new Nazi chimera appears and plunges the world into the abyss of horror again using the blindness of the international community?
Type: Discussion • Score: 3 • Views: 273 • Replies: 2
No top replies
1
Reply Tue 10 Sep, 2019 07:57 am
@JoeCarter999,
Your point?
0 Replies
2
Reply Tue 10 Sep, 2019 10:00 am
@JoeCarter999,
V-E Day is commemorated on May 8th. You're a bit late.
0 Replies