Thousands of pubs across the UK are to end "Happy Hour" promotions as part of a campaign to curb binge drinking.
The ban is being introduced by all 32,000 members of the British Beer and Pub Association. 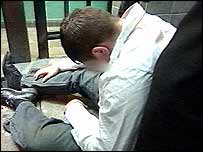 Binge drinking costs the UK around £20bn each year

The association says it hopes the measures will help combat the increase in binge drinking and anti-social behaviour.

The government estimates the problem of binge-drinking costs Britain about £20bn a year.

The scale and cost of drinking in the UK

Other cheap and free drinks deal may be axed as part of the campaign.

Association spokesman Mark Hastings told the BBC News website that happy hours had no place in the industry and pub companies wanted to encourage people to enjoy themselves responsibly.


"Our members have committed themselves to stop running promotions which can fuel excessive drinking and we're looking for support from the government and the police.

"Clearly there's been a lot of debate around binge drinking and anti-social behaviour and happy hours have been highlighted as one of the reasons for this. That's why we decided to take this step.

"I don't think it's a silver bullet solution but it will certainly have an impact."

Among those joining the campaign are all pubs owned by Carlsberg, Heineken, Scottish and Newcastle, Youngs, Theakston and Diageo, the paper reported.

The All Bar One, Slug and Lettuce and Pitcher and Piano groups are also taking part.

The association is also calling on all pubs and supermarkets which sell cut-price alcohol to follow its example.

"The government supports the drinks industry in working towards ending promotions which encourage speed drinking, including all-you-can-drink and other Happy Hour sales," he said.

"We welcome the British Beer and Pub Association's positive engagement with this issue."

Earlier this year the home affairs select committee said it wanted to see an end to cheap drinks promotions thought to encourage binge-drinking.

"The underlying problem is of too many people drinking heavily in small geographical areas."

He said longer term policy should be on proper city planning "with diverse activities supported by adequate transport and other facilities".

oh sh!t, 'nother scuse for the poms to emigrate

I read an article sayint they even frown upon "happy hour" appetizer specials, saying it encourages drinking.
0 Replies
1
Reply Mon 23 May, 2005 07:27 am
A Salesman from England is travelling through a remote part of Scotland, when he realises that it's getting dark and he has to find a place to stay for the night.
He sees a sign on an old Inn, stating that it has rooms available, so he goes in to make enquiries.
He sees the Landlord at the Bar, and orders a Pint before asking him about a room.
"That'll be 2 pence", says the Landlord.
"What? 2p for a Pint of beer....how can that be?" wonders the Salesman.
"Well" says landlord "It's the two hundredth Anniversary of the Inn today, and we are celebrating by charging the same prices that they were on the first day of opening"
"That's incredible" replies Salesman "How much is a room for the night then?"
"A room is one shilling" replies Landlord.
So the Salesman thanks his luck and pays him for the room as well, and lifts the Pint to his lips to take his first sip.
As he does this, he notices several Locals wearing Kilts at the other end of the bar, all looking at him and licking their lips. This was very strange, and made him feel quite uncomfortable.
"What's up with those fellows?" he quietly says to the Landlord "Why are they looking at me so glum, and why arent they drinking?...I would have thought that with 2p per pint, the place would be rocking "
"Well" replies Landlord, looking at his watch "It's not 8pm yet"
"What happens at 8pm?" enquires Salesman.
The Landlord looks at him and says "That's when happy hour starts".
0 Replies
1
Reply Mon 23 May, 2005 12:59 pm
Glum hour and its discontents...

Interesting about the appetizers - I would think myself that they help to slow speed drinking situations, but maybe not.
0 Replies
1
Reply Mon 23 May, 2005 01:10 pm
In God's country we don't have happy hour anymore so they pick a daily drink special and run it open to close. So you can pick which days you want to be happy from 11am to 2am.