Hongwei, who disappeared during a trip to China, has allegedly been taken in for questioning by Chinese authorities.

The Chinese government has remained tight-lipped on the disappearance of International Criminal Political Investigation (Interpol) Chief Meng Hongwei on a trip to China.

His disappearance was made public on Friday, when French authorities said they were opening an investigation to find out what happened to Meng, a Chinese national who served a lengthy term as the vice minister for public security.

According to a report by the South China Morning Post newspaper, Meng was taken in for questioning by Chinese authorities. The paper, which based its reporting on an unnamed source, said the reason for Meng's questioning was unknown.

Interpol said in a tweet that the case was "a matter for the relevant authorities in both France and China".

Meng's disappearance was originally reported by his wife, who told French police in the city of Lyon she had not heard from him since he travelled to China.

Al Jazeera's Adrian Brow, reporting from Beijing, said China's silence is a "reflection of how sensitive this case is".

"So far China has said absolutely nothing about the disappearance of Meng Hongwei. State-controlled media is so far not reporting this story either and any mention of his name on social media is being deleted," he said.

"That is I think a reflection of how sensitive this case is."

According to Interpol's website, Meng has nearly 40 years of experience in criminal justice and policing, and has overseen matters related to legal institutions, narcotics control and counterterrorism.

But Interpol has, in the past, denied this, saying its head does not intervene in day-to-day operations, which are handled by secretary-general Juergen Stock who is German.

Al Jazeera's Brown added that Meng was vice minister of the Public Security Bureau prior to his Interpol appointment and that made him a very powerful man.

"For some context, [Meng's] boss is a man who was jailed for corruption. Zhou Yongkang was the J Edgar Hoover of Chinese politics, he was the security tzar of China," he said.

"Then, in 2016, another vice minister of public security was jailed for corruption, so there is a pattern emerging. It is quite possible that Meng found himself on the wrong side of the political divide in China, at a time when President Xi Jinping is intensifying his crackdown on corruption."

The Chinese clampdown on corruption, known as Operation Fox Hunt, has led to claims in some countries that Chinese law enforcement agents have been operating covertly on their soil without the approval or consent of local authorities.

Some critics also view the campaign as a way for President Xi to purge the party of political foes. Since it began, several top officials have been detained and charged with crimes including "severe disciplinary violations", a phrase that usually refers to corruption. 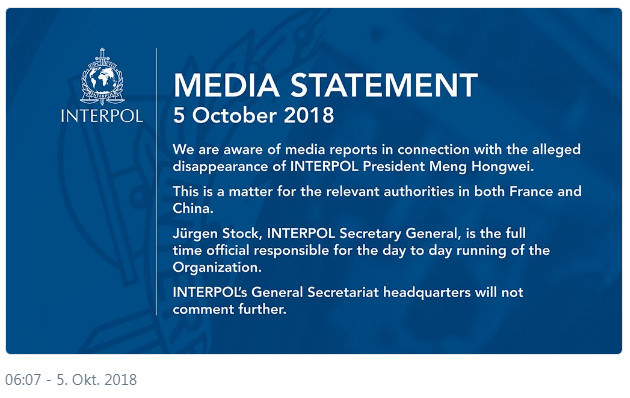 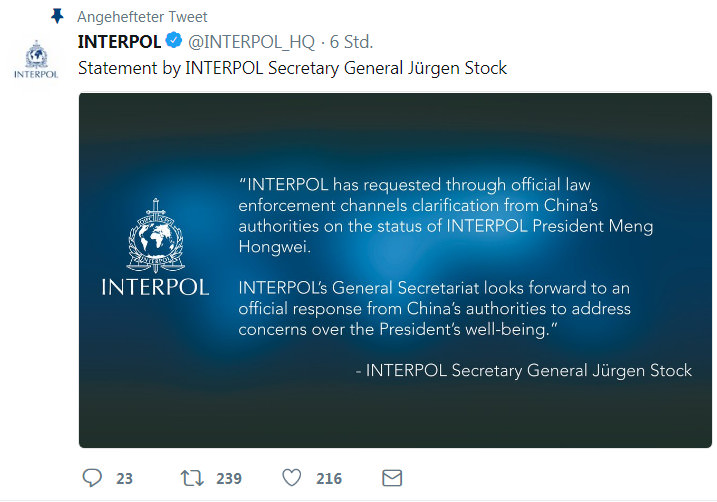 The Chinese Communist Party announced late Sunday that the missing president of Interpol, Meng Hongwei, was under investigation on “suspicion of violating the law” and was “under the supervision” of an anticorruption watchdog tied to the party.

The announcement that Mr. Meng, a Chinese national, was being detained was posted by the Central Commission for Discipline Inspection, the party’s watchdog against graft and political disloyalty, on Sunday night.

The statement did not give further details.

It came hours after Mr. Meng’s wife, Grace, told reporters in Lyon, France, where the two were living, that before her husband vanished on a trip to his native China, he had sent her an image of a knife, which she said hinted he was in danger, according to local media reports.

It also came a day after Interpol demanded answers from the Chinese government on his whereabouts of Mr. Meng, who has been missing since Thursday.

Mr. Meng’s wife said she has not heard from him since he left Lyon, the city in central France where Interpol has its headquarters, in September. France has begun its own investigation, with the authorities saying that he had boarded a plane and arrived in China, but that his subsequent whereabouts was unknown.

In addition to serving as president of the international crime fighting body, which is based in France, Mr. Meng is also vice minister in the Chinese Ministry of Public Security.

Since Xi Jinping took power as president of China, the commission has gone on a wide-ranging anticorruption campaign that has touched every level of the party.

PARIS (Reuters) - Interpol said on Sunday that Meng Hongwei - whom China says is being investigated over suspected violations of the law - had resigned as president of the international police organization.

“Today, Sunday 7 October, (at) the Interpol General Secretariat in Lyon, France received the resignation of Mr Meng Hongwei as President of Interpol with immediate effect,” Interpol said in a statement.

Interpol said South Korean national Kim Jong Yang would becomes its acting president, while it would appoint a new president at a Nov 18-21 meeting of the organization in Dubai.

This is a perfect example of an attempt to placate the wolf at the door. Treating China as if it is a legitimate member of the liberal world order is insane.
0 Replies