Tesla has new plant in China

SHANGHAI (Reuters) - Tesla Inc (TSLA.O) Chief Executive Officer Elon Musk on Tuesday landed a deal with Chinese authorities to build a new auto plant in Shanghai, its first factory outside the United States, that would double the size of the electric car maker's global manufacturing.

This is a big investment with a size of half million vehicles. It's strange Trump didn't come out to speak something like he said on Harley Davidson and media generally silence on it.

ZTE is high-tech company that China eagerly wants to keep it alive. Trump satisfies its will. Politicians and media are quiet too.

BEIJING (Reuters) - A Chinese man who embezzled $485 million from his employer in the biggest bank corruption case in China's history was repatriated on Wednesday by U.S.

These were big events took place a week ago. They looked like a concession made by Trump to China in trade negotiation. It is not. The tariffs problem is not resolved. The deport of Chinese most wanted indicates it's a secret deal between the Feds and Chinese secret police. I think they are framing a new drug case.
0 Replies
1
Reply Fri 31 Aug, 2018 03:22 pm

In the morning of 7/21/2018, I took out the plastic box which I used as basin for bath.(about 15 gallon size) I also use it to collect water when I water the garden. After watering the garden I put the box in bathroom, planed to bathing at night.

I have taken basin shower for a long time when I found the Feds polluted the running water with radiated material that would cause skin cancer. Last year I found they tried to perform a search and arrest by "finding drug trace" in Sewage water so I had to pour the bathing water into the lane. The way to frame is to contaminate victim by newspaper.
It happened in last September, see #984.

My wife came back in afternoon. To my surprise, she also brought back a newspaper. She rarely did that. It was 10 months away since last time someone dropped free newspaper at my door. The Feds plays that planting trick again. Of course, I didn't touch that plastic paper bag.

I also found that recently there were many junk mail with big envelop. I think they play the same function to plant drug trace on victims. 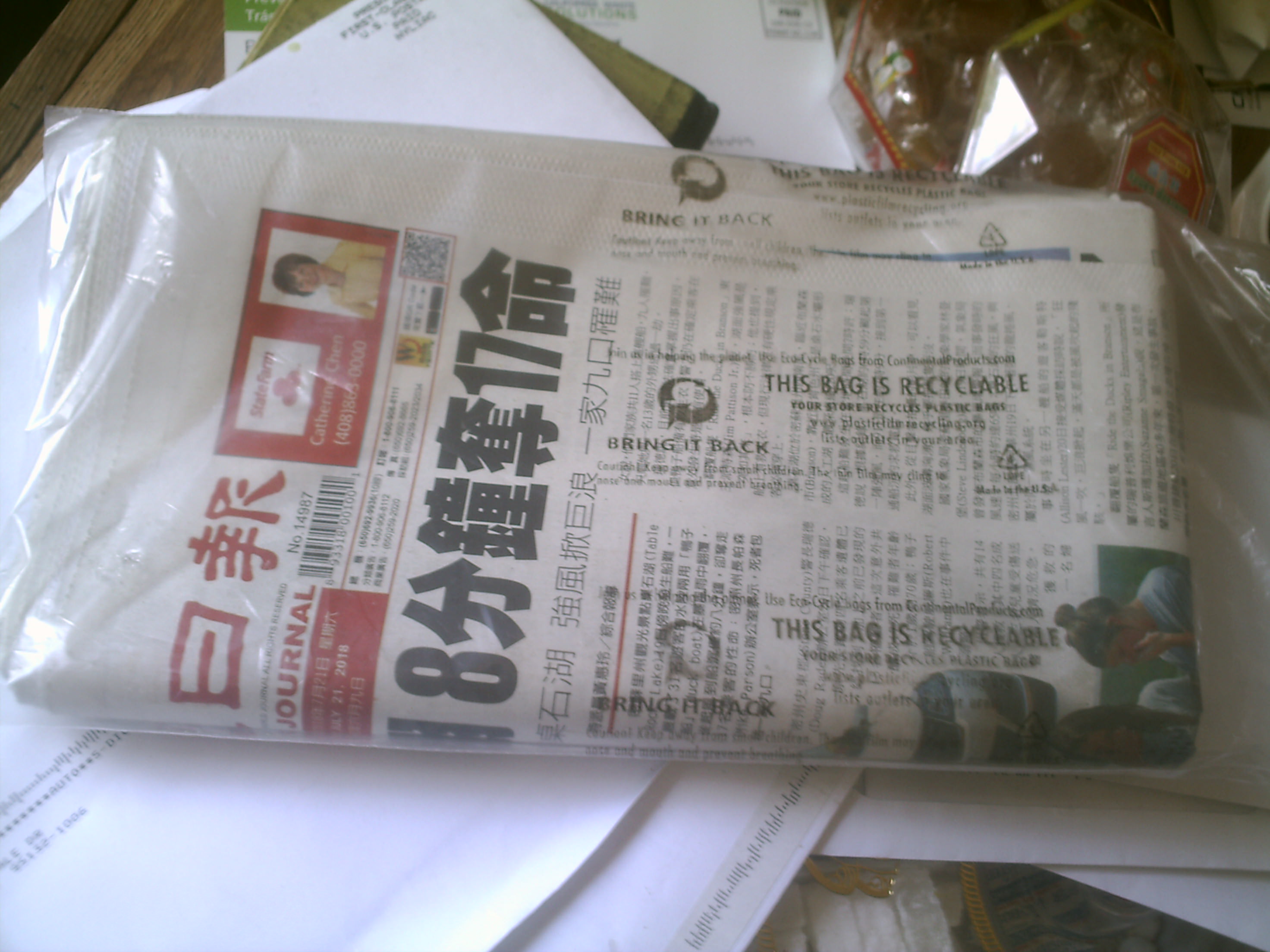 If you read my messages from begining, you know that my problem started with isotope money.

Isotope is a good tracer. It is invisible. It can be only detected by special instrument. People are not aware of it even they are traced by isotope. I think it is vastly used by Feds. But isotope also will hurt health. It's radioactive. So there is another usage other than tracing - killing. The victim used to have a cancer. It's a murder disguised in natural disease.

The fresh black moles alarmed me. I thought Feds contaminated my pillow with radioactive material which would cause a skin cancer. (I'll use "isotope" for radioactive material hereafter) I changed the pillow and slept with clothes or towel underneath my head which I often washed. It works. Small moles faded away. Big mole, turned into pale black. It's no more the scaring oil-black colour.

Since Feds poisoned the tap water, I used to buy bottled water or got the water from other source such like gas station or rest room of store. But even these water were often found poisoned because I depended on other's drive which always guided me to the market where poisoned water and food were prepared in advance. So I used to test the water to make sure if it was "clean".

Started from February this year, I started to have cough after meal. It was a sympton that food contanimated with isotope. But I failed to identify the source. Once my wife had the supper at same time with me. She coughed after meal. My wife rarely touched the dish I cooked. The only common food we had was rice. But it was me cooked the rice. The ingredients were rice and water, both verified "clean" beforehand, what happened? I was puzzled.

Soon I solved the problem. A few days later I suddenly found there were many moles on the back of my hands. I was immediately aware of that the tap water was contaminated by isotope. I do the dish wash by hands everyday. (We never use dish-washer) Though I avoid to drink tap water, I wash with it. Both hands soaked in isotope tap water caused a skin cancer sympton - moles. It also explains why we coughed after eating the rice. Though I cooked rice with clean water, I washed it with isotope tap water which contaminated the rice. I wash with tap water to save "clean water". 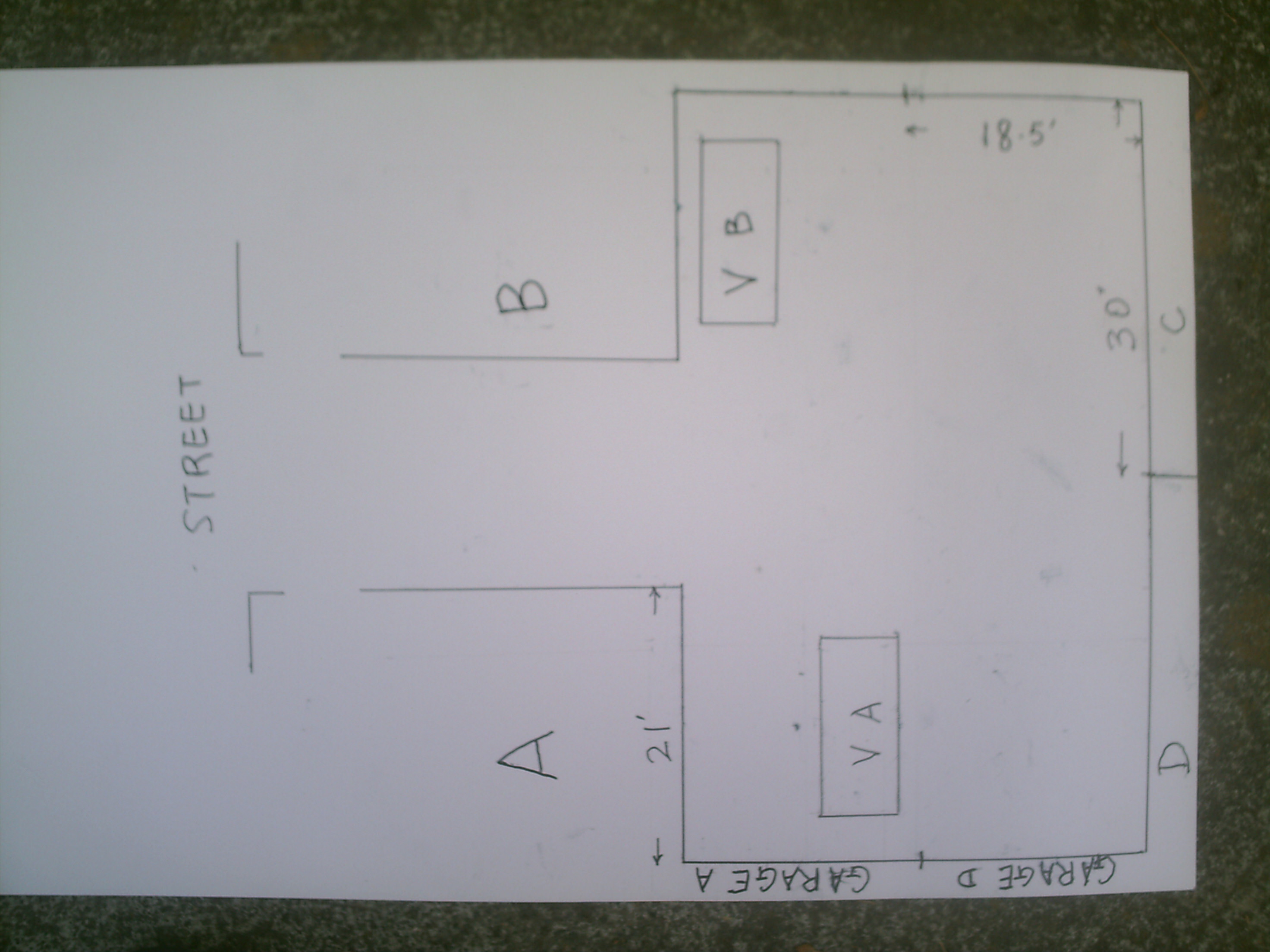 This is the map of the lane I live. My house is at D site. People go outside from D house have to pass through the lane between A and B house and their parking lot. Sometime ago I found owners of A and B each has a vehicle parking deadly at their garage lot(at least more than a year or two, or longer). To my experience, it's a surveillance car equipped with camera or censor. To alarm the outside surveillance station that their targets is leaving so they could track.

About two weeks ago, my wife gave me a letter, said, "It's a mistake. You go and give the letter to A neighbor." The letter came from Home Owner Association. It said they found an inoperative car on our site. It viotated the rule so we must remove it. The picture showed it was Vehicle A. It was a mistake shouldn't made by Home Owners Association. Consider they are the tool of the FBI, I think the Feds is framming new plot. I didn't go to neighbor A, worrying that could be a trap.

Seeing I was indifferent to the letter, my wife took it back. On 8/1, Vehicle A was towed away. The Feds had planed to damage my garage door last August. From the map of lane, you can see how Vechicle A becomes an obstacle of a roaring in car to impact the garage door.

In 2005, my rolling up garage door was broken up by the car my daughter drove. The Homeowners Association warned to fix it right away. I noticed the Feds drove the contractors from the market away so their men could take over the work for an unreasonable search and arrest. 12 years ago, I wrote,

On 3/18, Mercury News reported: "Unlicensed contractors get stung". 59 unlicensed builders were nabbed in an undercover sting operation. Those nabbed by the ruse were given criminal citations that could land them in jail for a maximum of six months, or they could be ordered to pay a $1,000 fine."

That's amazing similar to the event taken place in July 2003. When Feds tried to force me to have a roof contract with them, they created a roofing worker's death to intimidate other uninsured roofers out of the market. So the undercover contractor could get the deal. (see "145. SARS, a big issue(7/20/03)"

To avoid an unreasonable search, I repaired the garage door. It's more then ten years now, the repaired garage door had worn out and had to be replaced. In late May, the Homeowner Association mailed me a notice that there would be a meeting. I knew that was to justify an inspection. The target was the garage door.

In mid June, my wife gave me a weekly magazine - "USCITYPOST"(June 17, 2017) In its "Business Classified", I found four advertisement of "Garage door" contractors. In newspaper commercial, "Garage door" is a rare. That four ads obviously were prepared for me. To avoid being framed by the Feds, I had to do it by myself. I thought of the original one piece garage door which I hadn't abandoned.

The Homeowners Association's meeting date was set on 7/26. I had to replace the garage door at that time. In mid July, I dug out the old one piece door. What surprised me was next day President Trump told media he was going to fire Sessions.


In an interview with the New York Times, the president on Wednesday slammed Sessions for recusing himself from the Russia investigation, believing that this action led to the appointment of a special counsel.

Trump is unqualified to be president. His victory was out of the support of the Feds.(FBI) Now I believe his main task is to eliminate me - Kat Sung. When they thought it was a certain, they didn't expect I dug out an old door. So Trump was so angry. They quickly plan new plots in rogue's way.

On Aug. 3, a "Fed Express" cart roared into the lane, not for delivery, but turned around to drive out.
Then came the PG&E engineer pick up to replace the gas meter of my house.

I think they have two plans: 1. To create a gas leaking. 2. To damage newly installed garage door to force a replacement. I believe so because two days later, a US Mail cart rushed into the lane too. Both cars rushed in with high speed that caused large noise. That was not the way to move in small lane. As for why changed a mail car later? The "Fed Express" cart is too big and long, not easy to aim the target in a lane. The mail car is smaller and easy to carry out the impact mission.