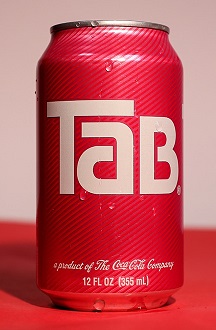 Tab is one of several "underperforming" products Coke has said it is eliminating from
its brand lineup by the end of the year as the company seeks to streamline production
and focus on bestsellers...
1 Reply
1
Reply Fri 16 Oct, 2020 01:08 pm
@Region Philbis,
They stopped selling that here in the 70s. They started selling it in the seventies too, I think it lasted about five years.
1 Reply
1
Reply Fri 16 Oct, 2020 01:15 pm
@izzythepush,

As near as I can remember, the only point of Tab was to shove a caffeine beverage without sugar on diabetics and people wanting to either slim down or stay a sack of bones.

My mother drank Tab. It had an ugly aftertaste (I took a few tastes).
Tab ceased making any sense after the Coca Cola company came out with Diet Coke. I mean what the F? Two diet colas from the same company?

As to the word Coke, some locations in the U.S. use this word for all sodas.


If someone wants weird, there's Mountain Dew. It even has a sugar free version. If that doesn't tickle your eat lobes (which is a side effect of M.D.), Mountain Dew also comes in several flavors past the original.

Here we have Matt, from It's A Southern Thing video/youtube channel ranking some.

(Better him than me! I tried the stuff once. Never again!)

It’s hit and miss, you tend to find it in places where everything costs a quid.
0 Replies
2
Reply Wed 7 Apr, 2021 11:03 pm
0 Replies
1
Reply Thu 8 Apr, 2021 02:18 am
On John Oliver the other night he was talking about Pepsi flavoured with something called peeps which he clearly doesn’t like.

Every clip on it was punctuated with some sort of demon voice screaming how bad it was.

On John Oliver the other night he was talking about Pepsi flavoured with something called peeps which he clearly doesn’t like.

I guess you guys don't get Peeps over there across the Big Pond. They're a candy that once was associated with only Easter. Pretty divisive stuff for a candy that's marshmallow covered with sugar. The company now makes several variations of them (shape-wise) for several major holidays beyond Easter.

Last year was the only year they didn't make them for Easter ... due to COVID.

I really like them and try to get them at least once a year. Didn't get any this season (but ... maybe they're still around on clearance? I probably won't go into a drug store just for that to find out).

Every clip on it was punctuated with some sort of demon voice screaming how bad it was.

I like John Oliver but this really pissed me off, if anything it’s made me want to try it.


Stephen Colbert does a similar bit of shtick but to a much less intense degree. One line of demon voice riffing/narration. You're not wrong about John Oliver's abusing this gimmick. His production seems to keep pushing it a bit more and more. It can get pretty old pretty fast. Not a humor killing thing for me but one day I might roll my eyes out of my head if he lengthens the skit for too long a time.
1 Reply
1
Reply Thu 8 Apr, 2021 10:12 am
@tsarstepan,
We don’t have peeps over here, Easter is all about chocolate eggs.

Then there’s chocolates that are just for Easter like Cadbury’s creme eggs, caramel eggs, mini eggs.

They all do it, there’s smarties eggs, milky bar eggs all sorts.

The closest we get to confectionary that’s not chocolate are speckled eggs. They’re sold loose in certain sweet shops and they’re not always available, very sugary and sweet.
1 Reply
1
Reply Fri 9 Apr, 2021 10:14 am
@izzythepush,
As blasphemous as it sounds, Peeps is a religious sect that could whip up its own passionate zealots into its own crusade. Maybe we need a Peeps Crusade and send them to the UK to proselytize the people over there away from their heathenistic Cadbury creme eggs?

1 Reply
1
Reply Fri 9 Apr, 2021 10:42 am
@tsarstepan,
Creme eggs have been here for a very long time. I remember them from when I was a kid. At one point they were available all year round but they found they sold more if they limited sales to the run up to Easter.

After Easter they’re not in the shops. Not until just before Christmas, and I mean just before, 20th, 21st December and completely unannounced. They just quietly appear. They don’t get advertised until February.

I don’t know, but spotting a creme egg on Christmas Eve gives me a warm feeling. It shines a light beyond the depressing post Christmas time of darkness, and the nights are a fair bit longer over here in Winter.

I like to put one in the children’s stockings.

As an aside I read somewhere that people’s taste for chocolate is based on what they ate when they were kids. Cadbury’s has always been my favourite chocolate, I really like creme eggs, but flakes are divine, they’re the best. At the same time I don’t like Hershey’s chocolate, and I’m sure a lot of people feel differently in America.
0 Replies