What is the only invertebrate with intelligence, and consciousness?

Forums: Intelligence, Biology, Consciousness, Zoology, Octopus
Email this Topic • Print this Page
1
Reply Sun 18 Feb, 2018 11:15 am
@coluber2001,
HMMM, my post as a respone to your above jut disappeared. m I getting the Dale problem?

Of the Gtropods and Cephalopods, the Nautiloids and Belamnoids have the best evolution record because, based on their suture patterns nd theamount of "baking" they show during a sediments "hardening under pressure", these two groups are ideal environment of oil nd gas emplcement nd migration.
Octupii, not so much. They are a neritic sediment indicator but since oil nd gas are more basin deposited, octopii dont give us any real useful tool. Hoowever, of the cephalopods, octupii show us some of the coolest fossils of soft tissue
0 Replies
1
Reply Sun 18 Feb, 2018 01:18 pm
Deep Intellect by SY MONTGOMERY https://orionmagazine.org/article/deep-intellect/
0 Replies
1
Reply Sun 18 Feb, 2018 02:00 pm
Some 30 years ago or so I was in Florida in one of those shops that sells shells and other ocean artifacts. They had the shells of the chambered nautilus and next to them shells with the same shape as the nautilus but thin, almost like paper, and translucent. They were called the paper nautilis. I assumed it was another species related to the chambered nautilus that we're familiar with.

It sat on my shelf for years, and one day I looked at it and it had disintegrated, probably eaten by roaches. A few days ago I stumbled upon an article online that showed a picture of the exact shell, but it wasn't a nautilus at all, it was a shell of a pelagic (open ocean) female octopus called an argonaut.

The females of these octopuses construct these shells and then live in them in the open ocean at optimum depths 30 feet or so, below the motion of the surface currents. There are no chambers in the shell unlike the nautilus. The octopus bobs to the surface trapping air in the shell then submerges to a depth of neutral buoyancy, and there she lives.

Argonaut octopus and her shell washed up on a beach. She was found by a person and returned to the ocean. 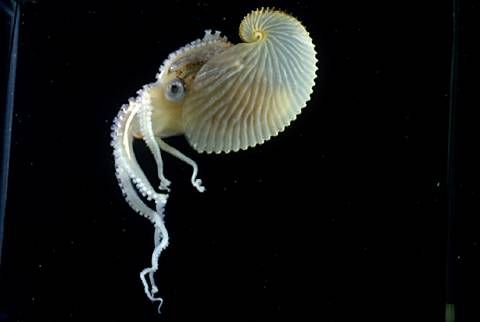 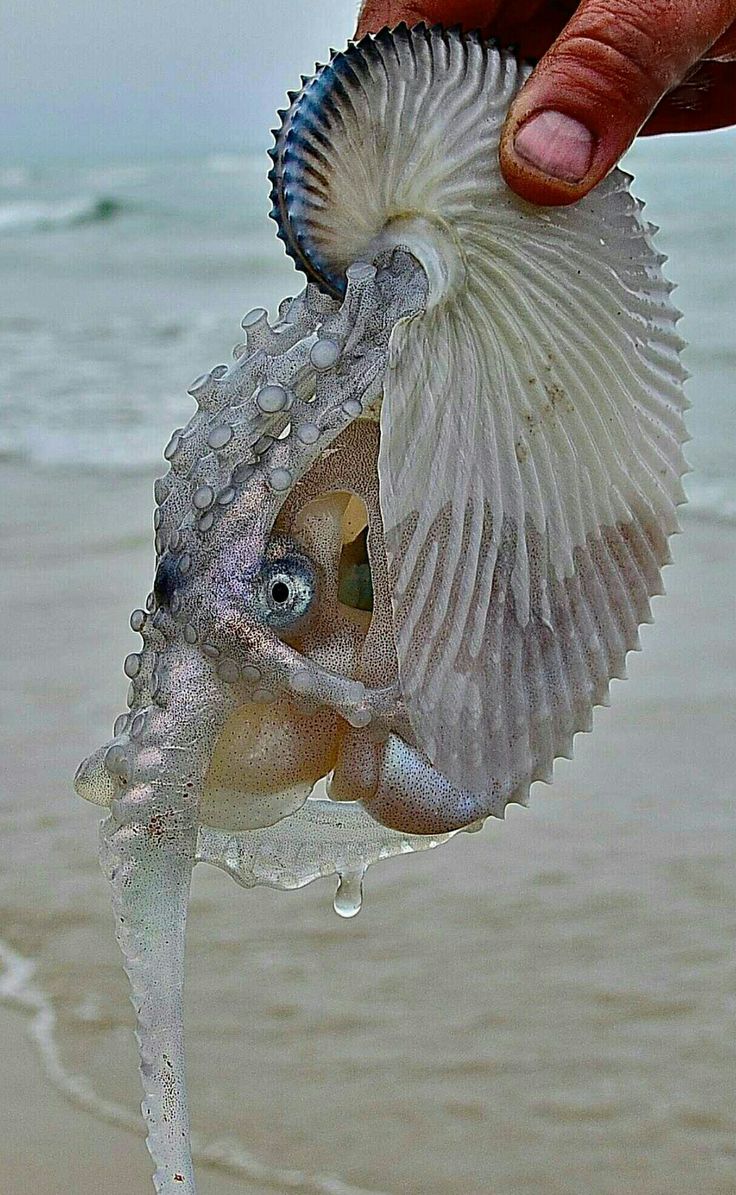 1 Reply
1
Reply Sun 18 Feb, 2018 06:55 pm
@coluber2001,
too bad they have such short lives. Are the giant octopusies any longer lived??
1 Reply
1
Reply Sun 18 Feb, 2018 08:18 pm
@farmerman,
It seems that all octopuses die after mating. The male a month or so after mating and the female shortly after her eggs hatch. Apparently keeping a female isolated is no better, because she'll lay the unfertilized eggs and then die anyway.

I was struck by the great beauty of the shells of The argonaut octopus, as beautiful as the nautilus themselves.
1 Reply
1
Reply Sun 18 Feb, 2018 08:52 pm
Octopus in beer bottle, a tight fit.

https://m.youtube.com/watch?v=DT97tS_XeaU
1 Reply
1
Reply Sun 18 Feb, 2018 10:56 pm
@coluber2001,
Amazing
0 Replies
1
Reply Sun 18 Feb, 2018 11:01 pm
@coluber2001,
yeh, those argonaut shells have a neat nacre that looks like its iridescence .Its probably got a fat water content to develop that look and thats probably why we dont see them in nature for long (water usually means desiccation and decay.

Do the giant v the little octupii have totally different maturation rates and their breeding maturities? I guess we dont know as as much about gint octupii
0 Replies
1
Reply Sun 18 Feb, 2018 11:04 pm
Live female Argonaut octopus at the Cabrillo Aquarium.

https://youtu.be/YzAxrninuOk
1 Reply
1
Reply Sun 18 Feb, 2018 11:11 pm
@coluber2001,
I just looked up argonaut shells and it appears they arent mde from aragonite like most other molluscs, but high magnesium calcite. We now undertsand why the shells arent durable. Magnesian concrete wont last in construction. Roger can speak to it better but when we do limestone searches we always try to keep the bulk MgO below 4%, otherwise the concrete , once set, will gradually erode.
1 Reply
1
Reply Sun 18 Feb, 2018 11:21 pm
Here is a video shot underwater in a Japanese Aquarium. First it shows an enormous tank with sharks and a diver and it switches to an argonaut octopus that may or may not be in the same tank. Then it switches to a smaller tank with an argonaut octopus, a sea urchin, and some anemones.
All the time they're playing the slow movement from Beethoven's 7th Symphony. It's all quite nice.

https://youtu.be/WYZGOl9tP8Q
0 Replies
1
Reply Sun 18 Feb, 2018 11:32 pm
Here is a video of a pack or swarm of argonaut octopuses off California. Then they all start swimming towards the camera or microphone, can't tell which, and they don't show the diver at all. I don't know why octopuses have such a fascination with people, but it seems like they do.

1 Reply
1
Reply Wed 21 Feb, 2018 03:11 pm
@Finn dAbuzz,
From these videos it seems octopuses have an inordinate fascination with people. It may not just be people, it's probably a fascination and curiosity about anything new that appears in their habitat. But when they see people for the first time, it must really arouse their interest. We must appear really weird for them unlike any other living thing they ever encounter.
0 Replies
1
Reply Fri 23 Feb, 2018 12:38 pm
@coluber2001,
Every living organism is both intelligent and conscious - Humans, not so much - Apparently.
0 Replies
1
Reply Fri 23 Feb, 2018 01:32 pm
@coluber2001,
coluber2001 wrote:

Here is another case of people releasing a stranded octopus. The released octopus walks toward them and touches their booty with his tentacles before swimming off. I don't understand this. The video clip ends before the octopus actually swims off, so we really don't know what it does after the video is over.

Octopuses prefer to be hidden in or under rocks or coral. It's possible that this one simply saw the booted-foot as something to possibly hide under, but after touching it realized there was no place to hide and wandered off.

As you mentioned in an earlier post, it's easy to anthropomorphise animal behaviors, and as sentimental as that may be, it's more likely that they are simply following their natural behavior patterns and we just misinterpret.

I am convinced that cephalopods are very intelligent and I think most animals experience emotions. But I am less convinced that invertebrates express the same needs as mammals. Mammals for example are reared by their parents for nourishment and survival and are attuned to physical contact. Octopuses on the other hand are hatched from eggs and washed into the ocean with no parental contact, so it's hard to expect them to want, need or appreciate physical contact the way we do.