Forums: Australia, Oz, Humour, Australian Information, a2k Oz Community
Email this Topic • Print this Page
-4
Reply Fri 22 Jan, 2021 05:31 am
There is no spoon.....
0 Replies
2
Reply Fri 22 Jan, 2021 04:23 pm
@Builder,
I worry where you are in the socials it sounds like a rabbit hole. And I don’t agree about Newscorp in tota they still have holdouts like Craig Kelly and Rowan effin Dean. I imagine Chris Kelly is in there two but he doesn’t show his head after embarrassing himself o election night.

Anyway, Arnold Schwarzenegger makes an interesting point about rabbit holes at the end of this piece -even though his topic is not the election: 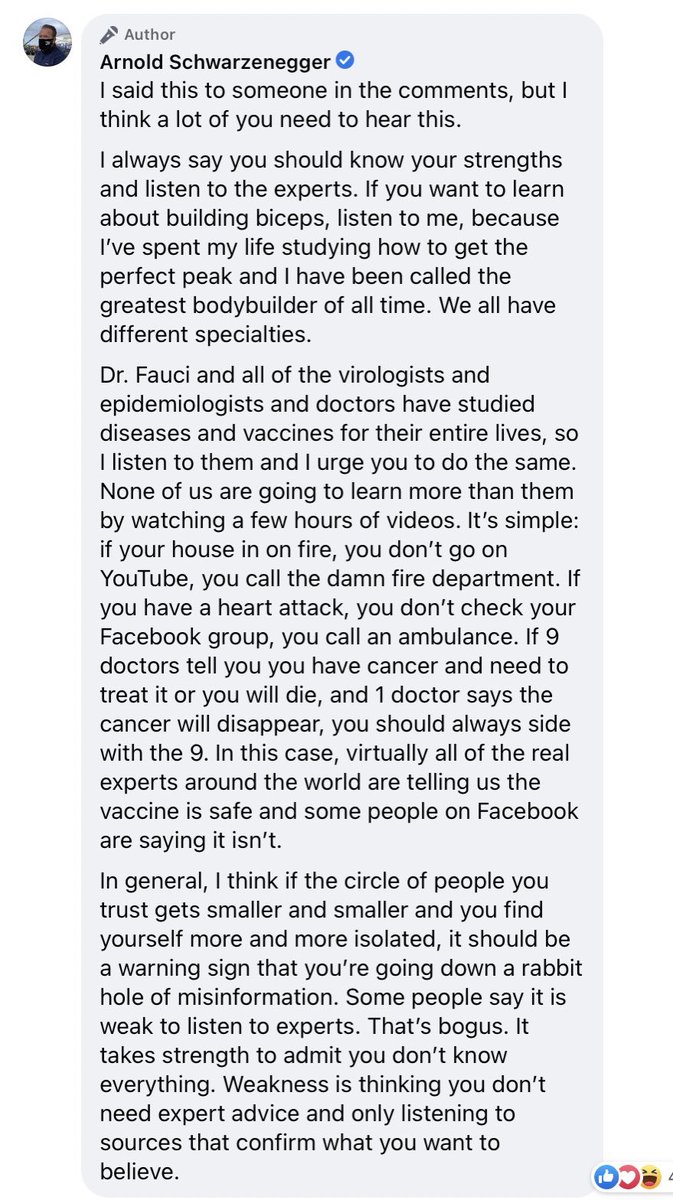 I worry where you are in the socials

All of these comments are on Channel 7's page, hinge.

I have no idea who Craig Kelly, Or Rowan effin Dean is. Assuming Chris is Craig's brother?

Interesting that you're quoting a liberal governor in Arnold, but I don't follow him, either.

Maybe it's you that needs to tune out of the MSM's garbage content a lot more.
1 Reply
1
Reply Sat 23 Jan, 2021 07:00 am
@Builder,
You’re quoting comments from channel 7’s site and you think I’m paying too much attention to MSM.

The players
Chris Kenny - renowned dog ****** and Sky after dark sewage outlet
Craig Kelly - LNP backbencher, climate change denier, antivaxxer and presidential election conspiracy nut (who our last two PMs have intervene in preselections in to prevent him being dropped by his own local branch
Rowan Dean - editor of the Aust Ed of the Spectator and an Olympic qualifying dickhead who tried to be the next Andrew Bolt but lacked the’charm’.

Schwarzenegger was the republican governor of California. The fact that you’re using ‘liberal’ as a slur American style worries me. I know you’re a smart guy and passionate about solar. Are you OK?
0 Replies
1
Reply Sat 23 Jan, 2021 04:42 pm
@Builder,
Well god old Scotty From Marketing has managed to distance himself from the global conspiracy that ludicrously suggests that the US presidential elections were free and fair https://thenewdaily.com.au/news/politics/australian-politics/2021/01/16/atkins-scott-morrison-unmasked/
1 Reply
Below viewing threshold (view)
-5
Reply Sat 23 Jan, 2021 07:21 pm
@hingehead,
Gawd, you're really reaching now, hinge.

Morrison's failure to join in on the global dog-pile effort from the mass media hysteria is probably the smartest thing he's done this calendar year.

And you know I'm not a fan; not in the least.
1 Reply
2
Reply Sun 24 Jan, 2021 12:53 am
@Builder,
Hard to see this driven by anything by anything but his ties to the evangelical church and his close advisor and qanon nutter Tim Stewart.

Side question, do you agree with the idea that Jan 6 storming of the capitol was a false flag operation by neo-marxists? Because Craig Kelly does, and Morrison is happy for him to promote the idea. Just wondering where your conspiracy boundaries lie.
1 Reply
Below viewing threshold (view)
-5
Reply Sun 24 Jan, 2021 03:59 am
@hingehead,
Haven't seen enough footage of the "storming of congress" to make any kind of rational judgement, but quite amazed that it was allowed to happen.

The genuinely problematic situation, of career seat-polishers allowed to be dual citizens is what has destroyed true democracy in the US of A. That, coupled with the revolving door between lobbying and congress.

The president isn't the last word on anything, when you look at the bigger picture.


The president isn't the last word on anything, when you look at the bigger picture

I think youve hit on the REAL PROBLEM. Congress, in the last 20 years or so has ceded a lot of its Constitutionally assigned responsibilities to the president(unoficially) and when we get a demagogue , that president can wreak a lot of havoc in our system.
1 Reply
-4
Reply Sun 24 Jan, 2021 03:57 pm
@farmerman,
This highly experienced US doctor says we're technically at war.

Not a great time to have China Joe and his highly compromised son with the executive biro in hand.

She's not a fan of vaccinations and is pro-hydroxychloroquine. Whereas WHO says it's not an effective treatment for hospitalised COVID 19 patients
https://www.who.int/news-room/q-a-detail/coronavirus-disease-covid-19-hydroxychloroquine

She calls vaccinations a 'treatment of last resort' in article for the journal of the American Association of Physicians and Surgeons - which might sound impressive but there actually an anti-vaccination, anti-universal health insurance, pro-Trump, anti gun control (!) ultra-conservative backwards looking organisation of just 5,000 members (including Rand Paul) Source

You really know how to pick a source of information.

1 Reply
-3
Reply Thu 4 Feb, 2021 08:10 pm
@hingehead,
I see you got your "information" from wikipedia, you know, the "source" that is easily and simply altered and "adjusted" by the user-base, often to suit an agenda.

Here's the org's actual website, and I will note that the NHS has approved Ivermectin for post-covid symptom treatment, which is a godsend for those of us who've had the virus, and experience long-covid symptoms.

https://aapsonline.org/
2 Replies
1
Reply Thu 4 Feb, 2021 11:40 pm
@Builder,
I understand very well how Wikipedia works - I'm a contributor - and I know that bullshit is picked up very quickly and that there are citations backing up each statement - so you can check primary sources.

In addition Wikipedia wasn't my only source.

Good advice from you though "If an organisation seems dodgey check their website to see if they say they're dodgey" SMFH.

And this is classic you

Go to the NHS web site and search for ivermectin - NO RESULTS - so you're still peddling falsehoods. (I did find in a google search for NHS Ivermectin something about it's use in treating blepharitis)

That doesn't discount that ivermectin might have a role - but nowhere does the NHS say they approve it for COVID-19.

Remember that most people, including the very few Aussies so far affected, didn't die of the SARS Cov2 (which you denied it was called)

Long-haul covid is something we're all going to have to deal with, simply because the "vaccine" does nothing effectively. Welcome to our future.
1 Reply
1
Reply Fri 5 Feb, 2021 07:52 am
@Builder,
Quote:

because the "vaccine" does nothing effectively

Why do you persist with this thought when a) there is more than one vaccine, and b) clinical tests for the four most prominent vaccines have shown no deaths through covid? Sure, there's doubts whether it stops you from spreading it but it also saves you from dying from it.

) for yet again floating past your obvious mistaken statement about ivermectin being approved by the NHS.

or yet again floating past your obvious mistaken statement about ivermectin being approved by the NHS.

Just like you "floating past" your flat out denial that covid19 was (and still is) SARS CoV2, right?

You're both dull, and boring.

Hard to say, with any conviction.
1 Reply
1
Reply Sat 6 Feb, 2021 09:42 am
@Builder,
That argument, that you lost was about the name of the virus versus the name of the disease. Happy to track down the thread if you want to be shown you’re wrong all over again. Which indeed must get boring.
1 Reply
-3
Reply Sat 6 Feb, 2021 08:13 pm
@hingehead,
It's on this thread, a few pages back. The Lancet agrees with me.

Not to disagree with most of your points saying COVID is a form of SARS is like saying cats are of a form of hyenas, in that they are both mammals.